Salman Khan’s Bigg Boss 15 started on a great note but has become dull and boring with falling TRPs. Raqesh Bapat, who entered the house as a wild card entry to add some spice to the show with his budding romance with Shamita Shetty also had to leave due to his health condition. This gave birth to several rumours and speculations that former contestants are being roped in to provide some fodder to the reality show. Pavitra Punia, Shivin Narang and Moose Jattana’s names were added to the list of hopefuls but now all of them have rubbished these rumours and asked people to stop spreading fake news.

Taking to Instagram, Pavitra in a scathing note said that she is done with Bigg Boss and doesn’t want to be associated with anyone. She wrote, “So, there have been a lot of rumour going on which says, I am the confirmed challenger contestant to enter in Bigg Boss 15. Fortunately, THE News Is Fake, I AM NOT ENTERING THE BB15 house. I have done my part in BB 14 and I don't want to be associated with anyone. So Kindly don't spread this bundle of not true news. Wishing the contestants all the very best. Good Luck. Always new and always in, yours truly, Pavitra Punia.” (sic). Pavitra was one of the strongest contestants last year and has found love in fellow co-contestant Eijaz Khan. The couple have been together ever since then and are going strong. Shivin also took to Instagram stories to dismiss the rumours of his participation. He wrote, “It has come to my attention that there are speculation about me entering #BiggBoss15 this year. I’d like them to know, as well as the audience, that I won’t be appearing on the show. My best wishes to all the contestants. Cheers!” 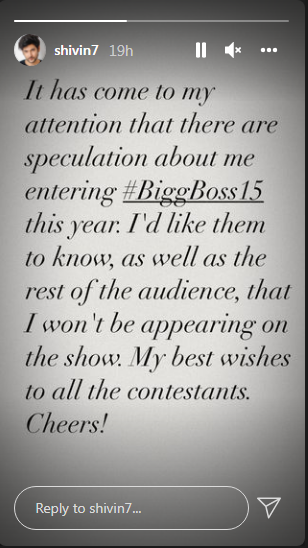 On the other hand, Moose also responded to the buzz and confirmed that she won’t be entering the show.

Moose Jattana shared a story on her Insta account stating that, "She is not going to enter Bigg Boss 15 House as Wild Card Contestant," #BiggBoss_Tak pic.twitter.com/D7YPsz0eHE

Bigg Boss 15: Tried to demean just to set a narrative about me- Umar Riaz reacts to Geeta Kapur's comment on his profession

Bigg Boss 15: Tejasswi Prakash asks Karan Kundrra if he will invite her to his wedding; the latter reacts