Advertisement
HomeTELEVISION NEWSBIGG BOSSBigg Boss 14 Promo: Rajkummar Rao to bring a new twist days before the finale; Bharti Singh and Haarsh Limbachiyaa leave the contestants in splits with their antics

Bigg Boss 14 Promo: Rajkummar Rao to bring a new twist days before the finale; Bharti Singh and Haarsh Limbachiyaa leave the contestants in splits with their antics 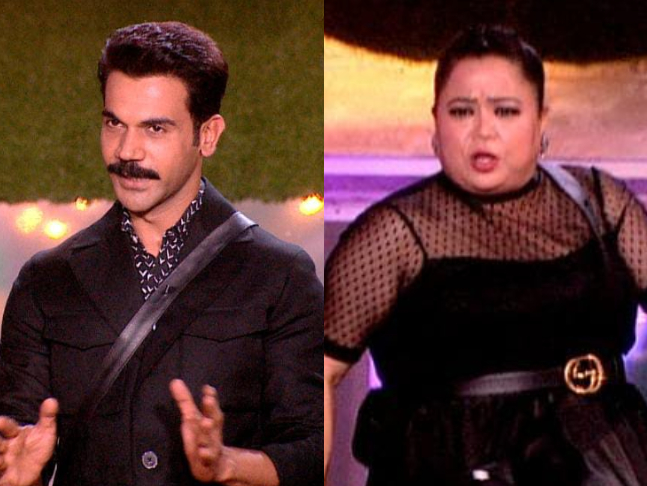 Salman Khan’s controversial reality show Bigg Boss 14 is nearing its end. The show is in its finale week and in just two days we will get to see who wins the trophy this season. Ahead of the penultimate and ultimate episodes, the channel released two new promos for tonight’s episode. Rajkummar Rao will be visiting the house to promote his upcoming film, Roohi, co-starring Janhvi Kapoor and Varun Sharma. On the other hand, Bharti Singh and husband Haarsh Limbachiyaa will also enter the house to bring some laughter the contestants’ way.

In the promo, Rajkummar is seen wearing a black outfit and sports a moustache. He introduces a task wherein the finalists have to talk about their co-contestants and mention something they dislike about them. Rubina Dilaik is seen talking about Rahul Vaidya and says, “I have still not understood what was the conflict between me and him. He comes across as a know-it-all person which I don’t like,” while Rahul and Aly say that Rubina will go to any lengths to prove herself right. Nikki talks about Rakhi and says, “Rakhi talks a lot of dirty things about others and even abuses a lot.”

However, Rajkummar surprises all the finalists when he says that there is a twist in the tale. He says no one is going out but someone is coming in that leaves the contestants in shock.