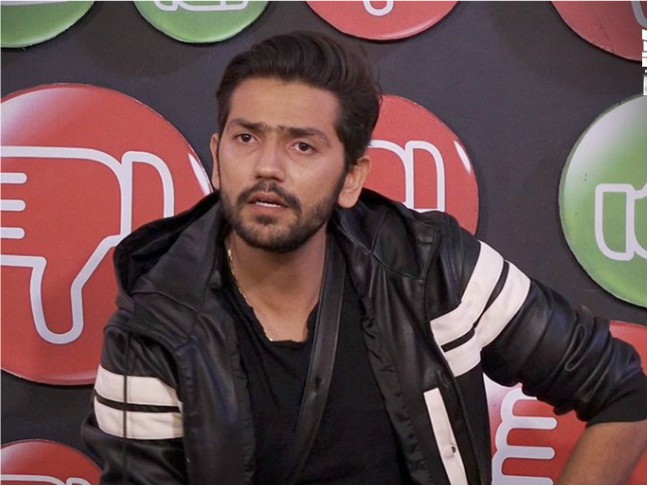 Two days for the finale and Romil seems to desperate for attention. As Vikas Gupta, Jai Bhanushali and Sweta entered the house to give a chance to the housemates he kept pinpointing at everyone’s mistake. This irked Vikas and Jai to a point that they both decided to not support him.

Sree and Romil refuse to bury their differences and continue to be at loggerheads with each other.  All in all the housemates tried making most of the last chance that was given to them to prove their mettle in the show.

The housemates woke up to the song “Say Na Say Na.” Deepak and Romil speak about Sree and KV and Deepak said that KV is actually a nice person. Later Deepak and KV spoke about Sree and how nothing ever keeps him happy and satisfied.

The housemates gather in the living area and BB tells them that this is their last chance to explain their side of the story to the viewers. Vikas Gupta, Sweta Singh and Jai Bhanushali entered the house. The three grilled the contestants one by one and sought answers to their behaviour on the show.

The first one to go was Deepak. Vikas said that he would be in support of him. Jai asked Deepak about he using his humble background as a card in the show. Romil said it was true as Deepak was not staying in his village. Vikas came in supper of Deepak and grilled Romil. The other housemates also agreed that Deepak did play the small town card. Sweta told him that he spent a lot of time just building contacts with celebs. Vikas again came to his rescue and said that there was nothing wrong in being ambitious. Jai then alleged Deepak that he flows with the wind and does not value relationships. Deepak said that he can not remain angry with someone for long. Romil said that Deepak is Janus faced.

The next on the hot seat was Sree. Sree has questioned on his behaviour mainly his aggression. He said that he was the same person that he was on the field. Sree was asked if he felt that he was the only person who played real in the house. Sree agreed and said that people did wear a mask and some of them had seen earlier seasons and planned their moves accordingly. Vikas pointed to Sree that he has shown finger to everyone in the house.  Sree said that it was just a reaction and didn’t mean anything. Vikas then brought up the topic if he abusing Surbhi. Sree said he regrets doing it. Sweta asked Romil and KV if he was genuinely sorry. Romil said that Sree was often sent to jail but it didn’t change his behaviour. Romil and Sree got into a verbal spat.

Sree got upset and walked out of the conversation. Later Dipika went and consoled him. Vikas too pepped up Sree. Sree apologized to Vikas for a lot things. Sree was later charged of not performing any task. Sree said that he did perform one task. Romil again jumped into the conversation and said that Sree did that after his wife said that it was working for his image on the show. Sree disagreed and said that he used it to fool Romil and his mastermind. Vikas said that not Romil but Sree was mastermind for the show.

KV is the next to go up on the hot seat. KV was alleged of being too kind to a point that he was taken for granted. Vikas said that he should have emerged a leader but he played behind everyone. KV said that he did not want to forcefully be a leader and is a peace loving person. He added that it is not necessary that everybody had to be a leader. Sree said that KV was a nice person to which Romil and Deepak laughed out loud. When Sweta asked them for the reason they said that Sree always spoke ill about him behind his back. KV said that he has learnt a very crucial lesson of keeping himself first.

The last but not the least was Romil. He had criticized everyone so much that Vikas and Jai both decided to not support him. Sweta said that Romil gave more importance to the game. Romil said that only three people mattered to him in the house and one of them was Deepak. Deepak said that Romil was the most diplomatic and fake person in the house. KV also agreed and said that despite the fact that Somi was uncomfortable talking about their relationship and had warned Romil to not talk about it he went and spoke about it each day to everyone in the house. Romil said he owed a lot to Somi and would never do anything to hurt her.

With Sweta, Vikas and Jai bid adieu to the housemates. Sree was upset that he used his celeb status in the house. Dipika pointed out the examples where he unknowingly threw that tantrum. The preview gave a glimpse of how housemates got emotional seeing their three months journey in the house

Bigg Boss 16: Ankit Gupta and Priyanka Chahar Choudhary have a spat as housemates get roasted by Shekhar Suman