It’s indeed a Good Newwzz for all the 'Virushka' fans out there as the duo announced their pregnancy in an adorable post earlier today. Married in December 2017, actress Anushka Sharma and the captain of the Indian Cricket Team, Virat Kohli have always been the one the IT couple for everyone out there. Be it standing strong beside each other or a subtle Instagram PDA, they have never failed to give us #CoupleGoals.

Elated soon-to-be parents Anushka and Virat took it to their social media space and set the internet ablaze with their pregnancy announcement. While the fangirl inside us was overwhelmed with joy, the inner-fashionista couldn’t help but notice Nush’s chic dress that could serve as a maternity style inspo.

Recommended Read: And then, we were three: Anushka Sharma and Virat Kohli expecting their first child in January 2021

Anushka was seen wearing a breezy number from label Nicholas that featured puffy dramatic sleeves and a frilled hemline. The black polka dress hugged her baby bump at the right places and a dainty necklace served as a perfect accessory. 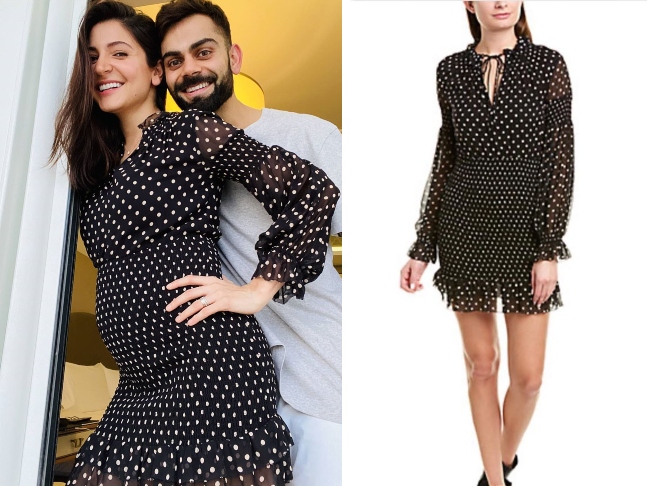 Being an advocate for all things minimalistic, Sharma opted for a fresh face and side-parted open tresses. Husband Virat, who joined her in the picture was seen wearing a simple grey tee and white pants.

Congratulations to the two on becoming three!