Not many knew about the unfair practice of gender testing in sports before filmmaker Akarsh Khurana made Rashmi Rocket on the subject with Taapsee Pannu as the flag bearer. Besides her, it co-stars Priyanshu Painyuli, Abhishek Bannerjee, Supriya Pathak and Supriya Pilgaonkar. The film is about a Gujarati village girl who aspires to represent India at the world athletics. The sprinter, who is an inspiration back home, soon realizes the exploitation female athletes face in the name of gender testing under an age-old system in our country.

The 2 hours 9 minutes long film begins with Ramnik Bhai (Manoj Joshi) motivating his daughter Rashmi Veera (Taapsee Pannu) to participate in all possible races to showcase her talent. Rashmi is introduced as a talented runner since childhood. After her father passes away in an accident, Rashmi’s mother Bhanuben (Supriya Pathak) takes over and makes sure her daughter represents her state Gujarat in the Asian Games 2014. Before her training, Rashmi meets Major Gagan Thakur (Priyanshu Painyuli) and falls in love with him because ‘bachpan se hi usse Fauji boyfriend chahiye tha’. Gagan is there to support Rashmi in every phase of her prep. 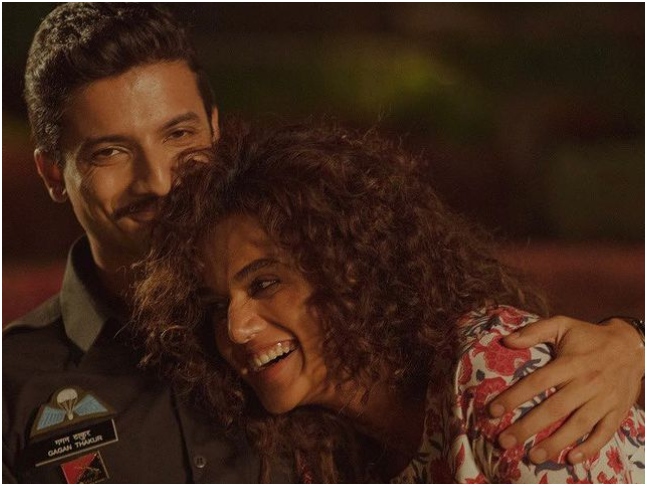 Rashmi then starts training hard and wins accolades for the country. However, her success is short-lived when she’s called for a gender verification test that leaves her shattered. Accused of being a fraud and banned from the national team, she is left heartbroken. Then enters the main hero of her life –  Lawyer Eeshit Mehta (Abhishek Banerjee) who coaxes Rashmi to file a human rights violation case and fight for justice. After much hesitation, Rashmi takes up the challenge and decides to fight for every girl who has been banned because of the unfair practice. The film then takes an inspiring turn and sheds light on Rashmi’s fight against the athletics association to regain her respect and a personal battle to uphold her identity and get back to the race of life.

The first half of the film is unnecessarily dramatized, something that not many would expect from a Taapsee Pannu film. While the love angle could have been completely skipped, it does bring in a sweet storyline in a delicate story like this. However, the second half is the true winner. With Abhishek Banerjee’s entry, the film picks up pace. Credit goes to casting director Vaibhav Vishant for choosing actors who perfectly fit their characters. Taapsee has over time carved a niche for herself and is known for high-content, issue-driven cinema and Rashmi Rocket is another film in her kitty. What’s striking is the way the actress has gotten into the skin of her character, with a near-perfect athletic body, mannerism and on-field action. She underwent an amazing physical transformation to play a sprinter and that’s well shown in almost all scenes. The temporary tanning on her face, however, looks extremely unnatural in some shots.

Another actor who steals the show is Abhishek Banerjee. With his lingo and look of a lawyer, the actor suits his role in the best way possible. Giving equal support to both Taapsee and Abhishek is Priyanshu – who with his impressive acting and sweet look makes a huge impact. The supporting cast of Supriya Pathak, Manoj Joshi, Supriya Pilgaonkar and Varun Badola give the film their all and make it what it is. Hats off to director Akarsh Khurana for highlighting the subject of gender testing in sports. Kudos to writers Kanika Dhillon and Aniruddha Guha for their inspiring work. Neha Parti Matiyani’s cinematography is impactful and creates the necessary tension, both on and off-field. Ajay Sharma and Shweta Venkat Mathew’s editing could have been crispier in the first half but the duo compensate after the interval. Amit Trivedi’s music puts life into the film. Watch Rashmi Rocket for its inspiring storyline and Taapsee’s powerful performance!