Read on for more details: 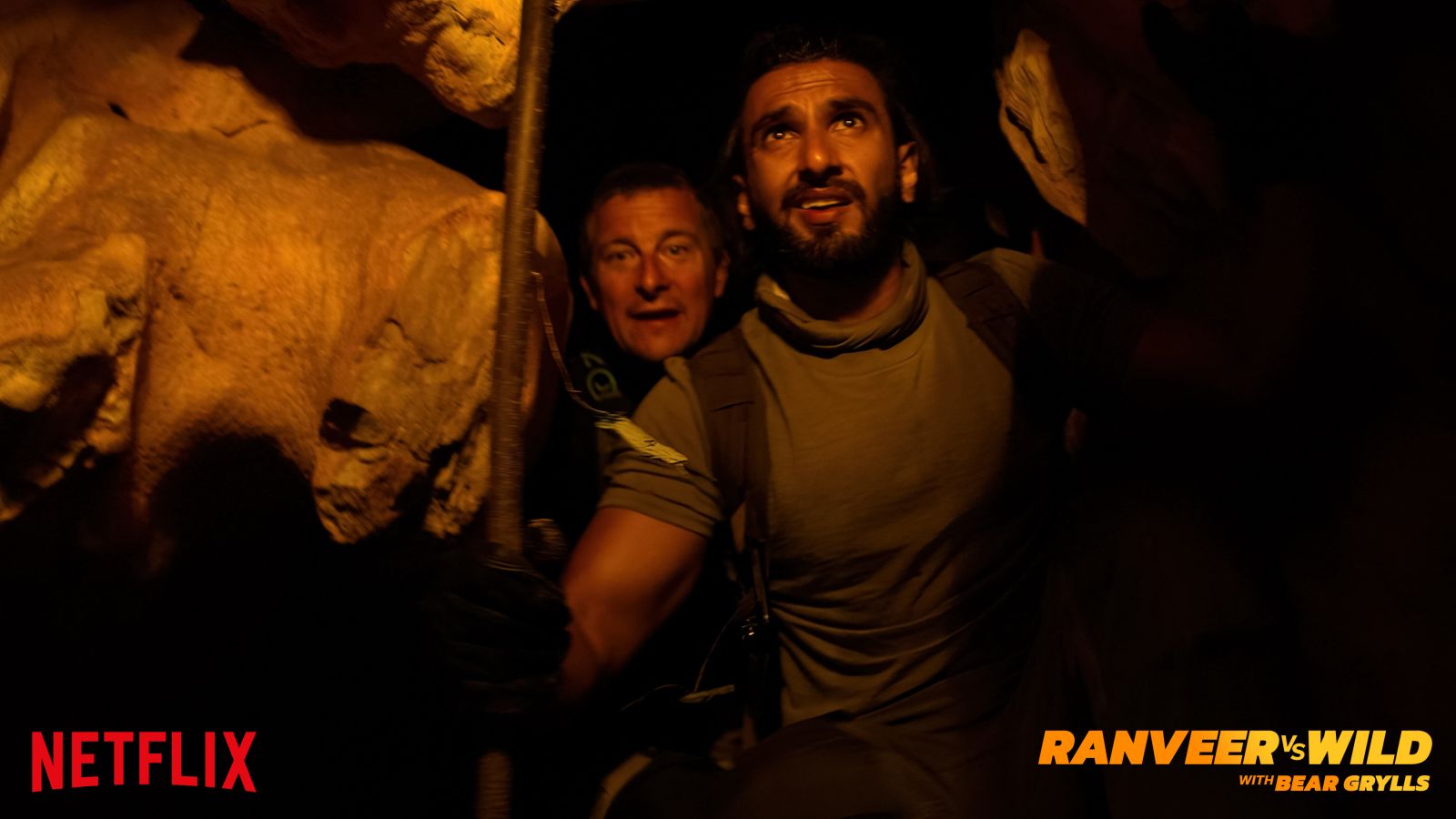 Looking at the success of the streaming non-fiction show Ranveer vs Wild with Bear Grylls, it seems the producers have given a go ahead to two more seasons of the same. The show, which dropped on Netflix last month, received positive response from the audience as it saw Ranveer in pursuit of a special flower for his lady love. It even sparked a meme fest as a clip from the show of Ranveer landing pecks on Bear's cheeks went viral.

A trade source informs that the shoot is expected to commence in September, "Ranveer is going off on a big adventure and this time it's going to be bigger and better. It seems like Ranveer is going to shoot two back to back seasons of Ranveer vs Wild with Bear Grylls this September. The first season became the talk of the town and is being hailed as a brilliant interactive show which made all the right headlines, thanks to Ranveer. He will turn on his charismatic energy again for the next two seasons that will blow people's minds in terms of scale and action.”

Ranveer will be seen putting his body on the line to do some death defying stunts in international locations. The source further says, "Ranveer will invest his time and energy to make the next two seasons of 'Ranveer vs Wild with Bear Grylls' truly phenomenal. Ranveer is one of biggest disruptors that the Indian entertainment industry has ever witnessed and now his eyes are set to disrupt the digital space with 'Ranveer vs Wild with Bear Grylls'. He wants the thrill to go up with each season and he will put his body on the line to pull off super risky stunts to deliver a power-packed entertaining show for audiences."

Oscar Issac starrer Moon Knight became a runaway hit with its first season and ended at a cliffhanger prompting Marc Spector/Stephen Grant’s (Oscar Isaac) to return with a second season. And now, the actor appeared on a TikTok from Mohammed Diab in which they heavily imply that a second season is in the works at Disney+. The TikTok features the pair wondering whether Moon Knight will get a second season to which Issac responds with "Why else would we be in Cairo?" The series also stars May Calamawy as Layla El-Faouly aka the Scarlet Scarab.

They're getting a crash course in football club ownership. From Rob McElhenney and Ryan Reynolds comes FX’s Welcome to Wrexham, an Original documentary series, coming soon on #DisneyPlusHotstar. pic.twitter.com/uZuK6M6k2U

Today, Disney+ Hotstar revealed the key art for the highly anticipated football docuseries Welcome to Wrexham, from Executive Producers Rob McElhenney and Ryan Reynolds. The Original series is coming soon to Disney+ Hotstar in India and will premiere with back-to-back half-hour episodes. Rob McElhenney and Ryan Reynolds navigate running the third oldest professional football club in the world. Welcome to Wrexham is a docuseries tracking the dreams and worries of Wrexham, a working-class town in North Wales, UK, as two Hollywood stars take ownership of the town’s historic yet struggling football club.

In 2020, Rob and Ryan teamed up to purchase the 5th tier Red Dragons in the hopes of turning the club into an underdog story the whole world could root for. The worry? Rob and Ryan have no experience in football or working with each other. From Hollywood to Wales, from the pitch to the locker room, the front office to the pub, Welcome to Wrexham will track Rob and Ryan’s crash course in football club ownership and the inextricably connected fates of a team and a town counting on two actors to bring some serious hope and change to a community that could use it.

Disney+ Hotstar released an exciting new trailer and key art for Andor, an original, 12-episode series from Lucasfilm. The series, which takes place prior to the events of Rogue One: A Star Wars Story, debuts exclusively on Disney+ Hotstar on its new date, Wednesday, September 21, with a three-episode premiere.

The Andor series explores a new perspective from theStar Warsgalaxy, focusing on Cassian Andor’s journey to discover the difference he can make. The series brings forward the tale of the burgeoning rebellion against the Empire and how people and planets became involved. It’s an era filled with danger, deception and intrigue where Cassian will embark on the path that is destined to turn him into a rebel hero.

Stranger Things writers have confirmed that they have started working on the final season of the hit Netflix series. According to 'Variety', the official Twitter account for the show's writers' room, @StrangerWriters, announced the news. In a tweet captioned "Day 1", the account posted a picture of a whiteboard emblazoned with the logo for the final season. Season 4 of Matt and Ross Duffer's nostalgic sci-fi series ended on a major cliffhanger, with the season's main villain Vecna (Jamie Campbell Bower) temporarily defeated, but succeeding in his scheme to merge the dark otherworld of the Upside Down with the sleepy Indiana town of Hawkins. The final season will presumably see the large ensemble cast fighting to protect the general populace and attempting to finally destroy the Upside Down.