Director duo Raj & DK, Raj Nidimoru and Krishna DK created a winner with Manoj Bajpayee starrer series The Family Man that earned them several fans as well. Now, with the Amazon Prime Video announcing its slate for the next two years, the director duo will be back on the streaming platform with not one but two series- Shahid Kapoor’s digital debut series Farzi and Manoj’s The Family Man 3. However, when they teased fans with a picture featuring Manoj and Vijay Sethupathi, the fans of The Family Man bombarded them with requests to cast the latter in The Family Man 3. Sethupathi features in Farzi along with Shahid and Raashi Khanna.

In the picture, Manoj is dressed in a white shirt and blue-striped blazer and pants whereas Sethupathi, who stood next to Manoj wore a printed yellow and blue shirt. Krishna wore a brown jacket over a printed blue shirt while Raj opted for a light blue shirt under a dark brown jacket. They captioned the image, “When MB and VS meet… there’s more to it than that meets the eye,” along with winking face emoji.

Fans were quick to respond to the image and the caption and one user wrote, “"Family Man season 3." "Manoj Bajpayee in Farzi?" asked another fan. Another user wrote, “In Family Man S3 I think MB vs VS..." "The Family Man season 3 with Vijay Sethupathi," wrote another fan. A fan also said, "That 'more' feels lethal!!!! Talent over-over-over leaded." "Vijay Sethupathi in Family Man 3 lesss gooo," commented another person. "Damnnn, is it a crossover??!!" asked a fan. "@rajanddk @bajpayee.manoj and @actorvijaysethupathi this is enough for a masterpiece," reacted a fan. 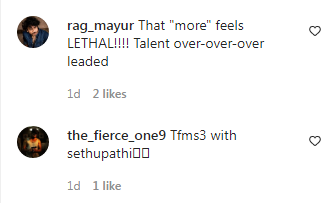 Koffee With Karan 7: Vicky Kaushal recalls events from his close-knit