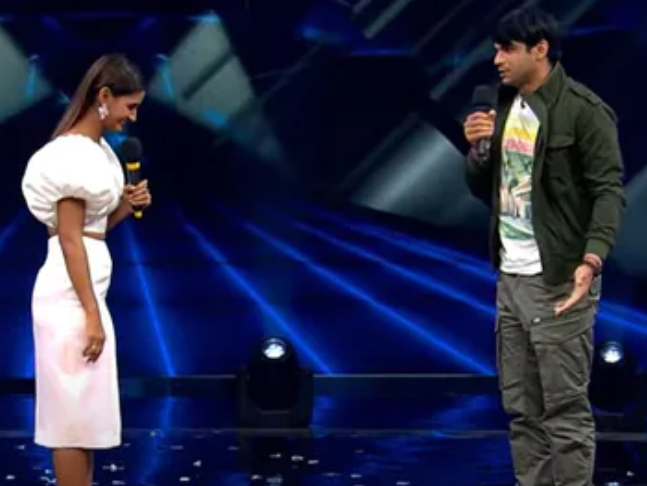 Olympic gold medalist and javelin thrower Neeraj Chopra will be seen as a special guest on the upcoming episode of dance reality show Dance+6. The promo of the episode was shared online wherein we could see the young sportsman burning the dance floor as he grooves to Ishq Tera Tadpave and proceeds to ‘propose’ to captain Shakti Mohan with hilarious speech that elicits some jealousy from host Raghav Juyal.

Raghav trying to impress Shakti and get her to say ‘yes’ to his overtures is a long running gag on the show and in the promo we see him trying his luck once more after watching one of the performances on Ishq Kameena. He tells her, “Shaks, main bhi tumhare saath ishq kameena karna chahta hoon (I also want to experience a bad romance with you).” The two then dance to Hawayein. However, Shakti asks Neeraj to show Raghav how a proposal has to be done.

Neeraj in his proposal to Shakti says, “Mere life mein toh sabse zaroori javelin hai. Mujhe baaki kuch...na itna achcha khana banana aata hai, na main time de sakta (The most important thing in my life is the javelin. Neither can I cook very well nor can I give you a lot of time),” which gets Raghav all riled up against the athlete. Raghav, pretending to be heartbroken, tells Neeraj, “Bhai aapne galat jagah javelin phenka hai (Brother, you have thrown your javelin in the wrong place).”

The promo also shows a special performance dedicated to Neeraj for his sporting achievement and Remo D’Souza says, “Ek gold hai jisse jevar bante hai, lekin iss gold se India ka tevar banta hai (There is gold which you can turn into jewellery, and then there is your gold medal, because of which India holds its head up high).”