Ever since its launch on Amazon Prime Video, LOL: Hasse Toh Phasse has been having audiences in splits, owing to its unique format and contestants, who are some of the best names in comedy. Having all contestants trapped inside a house has seen viewers not only fascinated but they have also compared it to the reality show Bigg Boss. It goes without saying that when someone talks about a very-popular show, they can’t not talk about the famous jodi #Sidnaaz (Sidharth Shukla and Shehnaaz Gill). Along with being highly entertaining, the duo has shown that they have a funny side as they recently engaged in some light-hearted banter on Twitter with their friends, Sunil Grover and Gaurav Gera, two of the contestants on LOL: Hasse Toh Phasse.

The banter started with Sidharth Shukla challenging our LOL participants that had he been given this task, he would have certainly won, to which Sunil Grover responds by saying that it’s not easy at all and maybe he should give it a shot. The conversation moved ahead with Gaurav Gera jumping in and tagging Shehnaaz Gill to join the challenge. Shehnaaz tweeted promptly, agreeing to join the LOL Challenge. 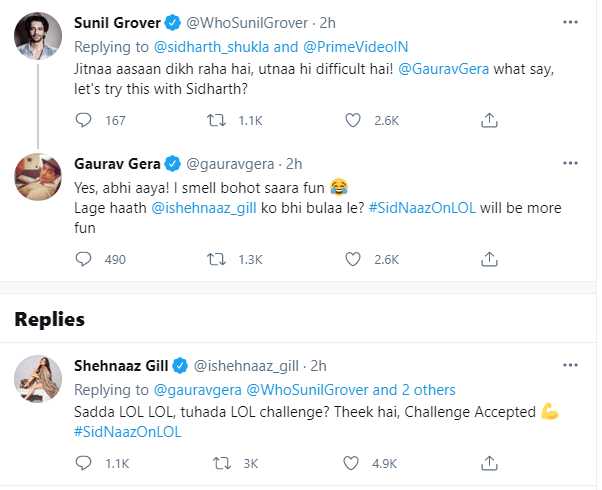 Surely this is going to get more interesting going ahead. Watching #Sidnaaz join the LOL-Hasse Toh Phasse Challenge, what more could fans possibly ask for?

LOL-Hasse Toh Phasse which is streaming on Amazon Prime Video, sees 10 talented comedians compete against each other for six hours, with two main objectives. The first one is to make the others present in the house laugh, while the second one is that they do not laugh or even smile themselves. The last contestant who remains straight-faced is the winner and takes home a grand prize. The show features India’s finest comedy entertainers Aadar Malik, Aakash Gupta, Aditi Mittal, Ankita Shrivastava, Cyrus Broacha, Gaurav Gera, Kusha Kapila, Mallika Dua, Sunil Grover and Suresh Menon make the incredible line-up of contestants who are under the constant watch of the hosts Arshad Warsi and Boman Irani.