Anushka Sharma produced Paatal Lok starring Jaideep Ahlawat, Ishwak Singh, Abhishek Banerjee and Neeraj Kabi in the lead roles landed in troubled waters after the Gorkha community raised strong objection at a sexist slur in the second episode. In the wake of this controversy, Anushka was served a legal notice by Lawyers Guild for making a seemingly demeaning and insulting gesture towards the Nepali community. In the latest development, Sikkim Lok Sabha MP Indra Hang Subba has addressed a letter to the Union Information and Broadcasting Minister Prakash Javadekar to take necessary action against Paatal Lok. Condemn the 'irresponsible and insensitive act', he extended support to the online petition filed against the neo-noir show.

"This is regarding sexist slur hurled against the Nepali speaking community in the second episode of the original series Paatal Lok which is being streamed in Amazon Prime Video. Nepali is one of the 22 languages listed in the 8th Schedule of the Indian constitution with 10.5 million people speaking the language as mother tongue. Hence the derogatory and offensive label made in the particular scene of the series has not only hurt the sentiments of the community but has also set an example of racist stereotyping of the people from the community especially at this time where the people from the northeast region have already endured racial assaults owing to the Covid-19 pandemic. I strongly condemn the irresponsible and insensitive act and would like to extend my unconditional support to the appeal made by the community through the online petition which has stressed on Amazon muting the slur, blurring the subtitles and uploading an edited version of the video along with an apology from the makers of the series and a disclaimer," Indra Hang Subba stated in the letter. 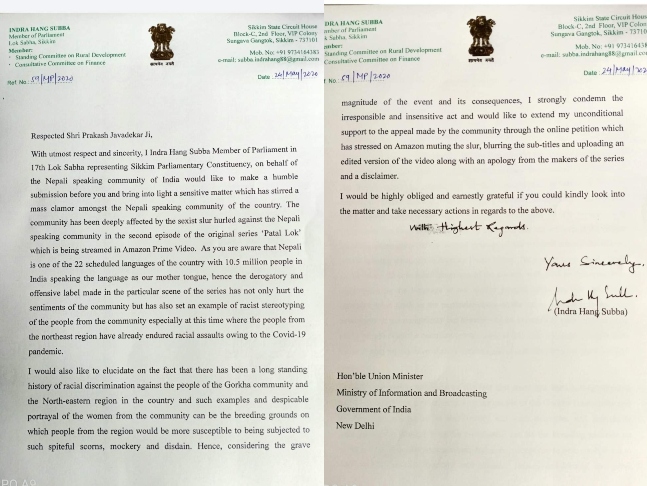 A week ago, members of the Bhartiya Gorkha Yuva Parisangh initiated an online petition pointing out at the racist slur in the second episode appearing at 3.41 minute. The group addressed the petition to the digital platform Amazon Prime Video, Anushka and Mr. Javadekar. They demanded that the slur is muted, the subtitle is blurred and an apology in the form of a disclaimer is added. They strongly voiced out their disappointment regarding the racist behaviour towards the North-Eastern community and the term used to insult the character named Mary Lyngdoh, which is a common surname for the Khasi community from Meghalaya.

Anushka, Amazon and Mr. Javadekar are yet to issue their statement regarding this.