'She has got Sridevi's talent,' says Surekha Sikri on working with Janhvi Kapoor in Netflix' 'Ghost Stories'

Karan Johar, Zoya Akhtar, Anurag Kashyap and Dibakar Banerjee, after delivering the success Netflix anthology Lust Stories, are back at collaborating with each other for yet another one titled Ghost Stories. Ever since the show was announced earlier this year, the audience was left delighted to get spooked and thrilled with an amalgamation of intriguing tales. And after much wait, the makers shared the first teaser of the anthology on social media platforms today. While the spook factor kept us hooked on till then end, what caught our attention was the presence of National Award winner Surekha Sikri in Zoya's tale. Surekhaji, who was missing from the big screens post Badhaai Ho, left us delighted with her glimpse. The veteran actress will be sharing the screen space with the lovely Janhvi Kapoor, who will be leading Zoya's story. Talking about her role in the anthology and her co-star Janhvi, Surekhaji told that she will be playing a patient who is being taken care of in her own residence by a nurse, that is Janhvi. Calling her an expressive actor, Surekhaji went on to say the Dhadak star has inherited her mother, late Sridevi's talent.

"My role is that of a patient who is being taken care of in her own apartment by a nurse, played by Janhvi Kapoor.  Janhvi is a very expressive actor. I like the way she speaks her dialogues. She can make a wonderful actress. She has got her mother's talent," Surekhaji added. 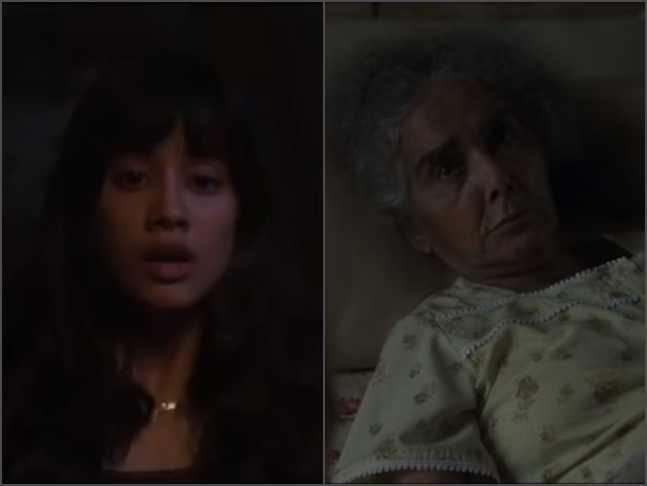 Speaking of the cast of Ghost Stories, apart from Janhvi and Surekhaji, the anthology stars Mrunal Thakur, Sobhita Dhulipala, Avinash Tiwary, Kusha Kapila, Vijay Varma, Gulshan Devaiah and others in the leading roles. The stories, directed by the filmmakers, will be thematically connected to each other and culminate in the end. Ghost Stories will premiere on Netflix on the midnight of January 1, 2020.

The Forgotten Army Review: Kabir Khan and Sunny Kaushal pack in a Repu