Two years after it's first Indian series, Amazon Prime dropped the official trailer of Inside Edge Season 2 today. While season 1 revolved around the Mumbai Mavericks team - a part of PPL aka Powerplay T20 League (a fictional Indian Premier League kind of T20 cricket tournament), the next edition of the PPL will see a volatile Vayu Raghavan (Tanuj Virwani) leading the Mumbai Mavericks to face their biggest adversary yet, the Haryana Hurricanes, who are led by a reinvented Arvind Vashistha (Angad Bedi).

The first season saw Prashant Kanojia (Siddhant Chaturvedi) killing Devendra Mishra (Amit Sial) and Zarina Malik (Richa Chadha) smashing Vikrant Dhawan's (Vivek Oberoi) head. This time, Vikrant's Bhaisahab, who always communicated to him over the phone makes a powerful appearance. Amir Bashir as Bhaisahab is eager to change the face of cricket, transforming it into a global sport. Zarina, who aspires to be like Bhaisahab, allies with him. 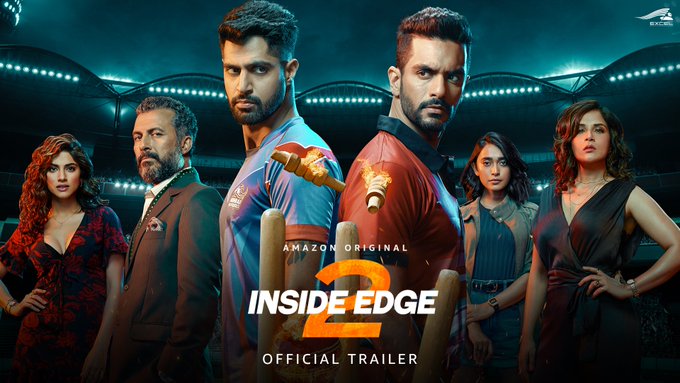 Written and directed by Karan Anshuman, Inside Edge season 2 will see Arvind and Vayu, who once shared a great camaraderie, pitted against each other as captains of two different teams. In the latest additions, Sapna Pabbi will play Vayu's love interest while Elli Avram will be seen opposite Siddhant Chaturvedi, the boy who is now popularly known as MC Sher from Gully Boy.

Recommended Read: 'Witness the game beyond the game' with 'Inside Edge 2' starring Vivek Oberoi and Richa Chadha; motion poster out now

The trailer suggests Vikrant Dhawan is behind the mess. Towards the end, a female voice asks him, "Are you watching." To which he replies, "Yes. It's all happening, just the way I planned it." A glimpse of Vikrant's scarred face is partially shown to the viewers.

Building on the success of its International Emmy nomination last year, Inside Edge is set in a landscape of sports, secrets, and scandals where selfishness is a virtue and sex, money, and power are mere means to an end, A story that pulls no punches, minces no words and takes no prisoners, Inside Edge Season 2 mirrors passion, courage, and love.