Allu Arjun’s Pushpa: The Rise has gripped everyone and the mania is not only limited to India. Australian cricketer David Warner, his wife Candice and his three daughters Ivy Mae Warner, Indi Rae Warner and Isla Rose Warner are also hooked to the songs from Allu Arjun and Rashmika Mandanna’s film and the Saami Saami song.

Recently, David took to Instagram to share a video of his three daughters grooving to the Saami Saami song from Pushpa. He captioned it, “Girls wanted to try Saami Saami song before mum and dad #pushpa @candywarner1.”

Allu Arjun reacted to the video and praised the girls as he wrote, “Sooo cuteee." Responding to the actor, Warner replied, “@alluarjunonline they love the song soo much." 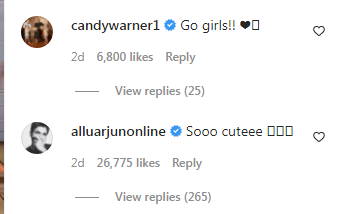 David also applauded Allu Arjun’s acting skills and tried his hand at Pushpa’s memorable dialogues and hook steps of its popular songs. The cricketer posted a fun video featuring himself in a few iconic scenes from Pushpa: The Rise and wrote, “Wish I was @alluarjunonline makes acting look soo easy #pushpa #india (sic).”

Pushpa: The Rise hit the cinemas last December and has received a roaring response from fans. Scenes, dialogues and the songs have become a rage with moviebuffs. People can’t get enough of songs like Saami Saami, Srivalli and O Antava. They are everywhere on social media and from celebrities to influencers, everyone has been grooving to them.