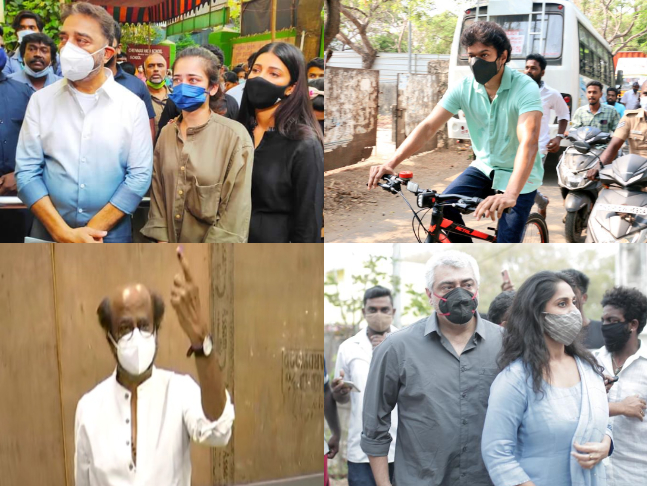 Voting for the assembly elections in Tamil Nadu started today. The high-stakes state election saw a bevy of top Tamil film celebs descend on their designated polling stations to exercise their adult suffrage. In their own respective way, some of them made a stand while others urged voters to cast their vote while some campaigned and showed their solidarity to different political parties and leaders.

Most celebs showed up early morning to cast their vote and did not exercise their celebrity status to jump the line. Suriya, his father Sivakumar and his younger brother Karthi stood in line to cast their vote.

Great Family Everyone should vote. That’s your rights. #Suriya pic.twitter.com/ebZWfeqLnC

RECOMMENDED READ: Salman Khan to step into the shoes of Thalapathy Vijay in Hindi remake of Master?

Ajith Kumar, who was at the polling station with his wife Shalini got irked by some fans who tried to get a selfie with the actor who snapped back at them in a rare angry mood.

Thalapathy Vijay came to the polling station riding a bicycle. He was accompanied by his entourage. Whether he was making a stand against the rising petrol prices or not that was not clear and he refrained from releasing any statement.

It's not easy to breath wearing mask, driving cycle under the extreme summer heat. But he did it in style

Its not just a ride. Its a Statement. .

Kamal Haasan also came to cast in his vote. Haasan, who is the chief ministerial candidate of Makkal Needhi Maiam, was accompanied by his daughter Shruti Haasan and Akshara Haasan.

Rajnikanth, also cast in his vote and so did Vikram, who came in sporting dark sunglasses and face mask. Director Lokesh Kanagaraj voted in Chennai and took to social media to urge followers to cast their ballot. He also apprised them that he has tested negative for COVID-19.

6 crore ppl voting today in TN but the headlines are about one man...@rajinikanth #Rajinikanth #Annaatthe pic.twitter.com/zQiLrtWgfM

Recovered from covid, tested negative! Thank you for all your wishes and prayers
Please vote pic.twitter.com/cDWnmjFmCE