The grandson of late filmmaker Raj Kapoor, Armaan Jain tied the knot with his sweetheart Anissa Malhotra in a lavish ceremony held on Monday in Mumbai. The couple, who is said to have dated each other for nearly 7.5 years, took the plunge in front of family and close friends. With the biggest of names in Bollywood marking their presence, the wedding was indeed a glamorous one. The Jains and Malhotras, post the wedding threw a reception party on Tuesday.

In attendance at the reception was Sonam Kapoor Ahuja. 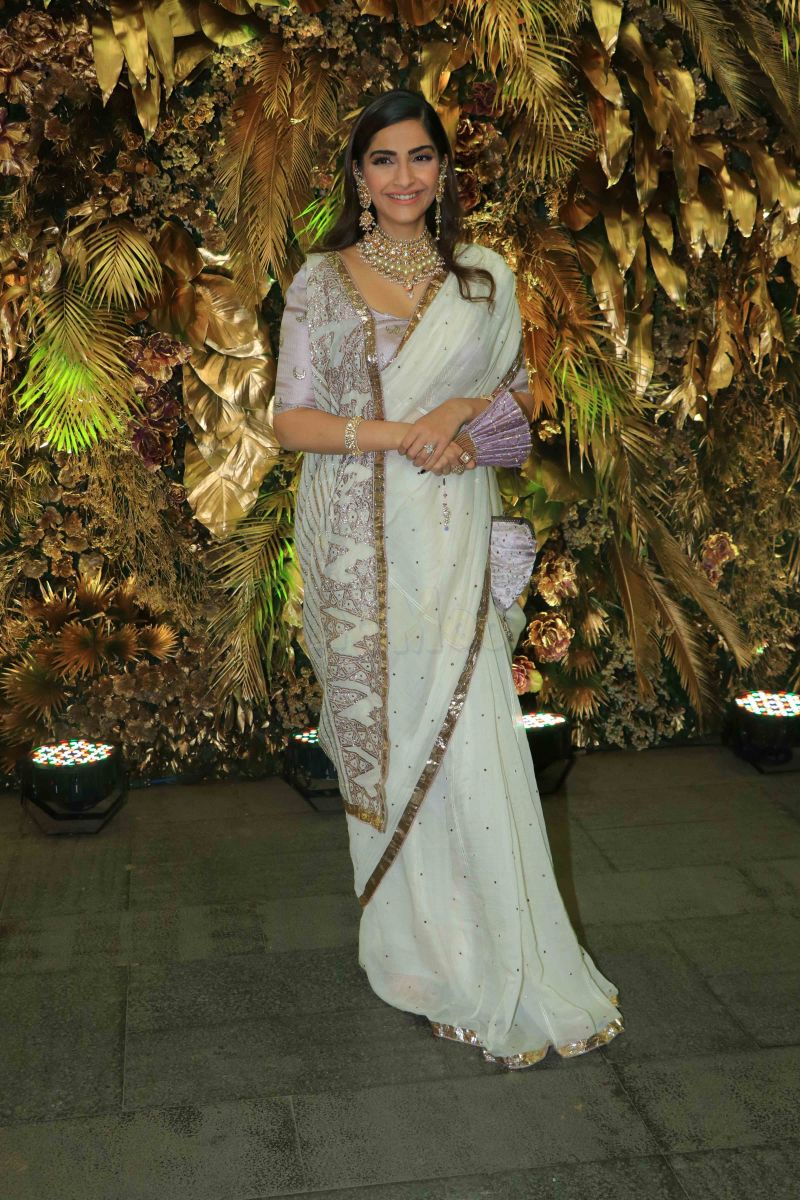 The actress who shuffles between Delhi and London with her husband Anand Ahuja is currently in her hometown and graced the evening with their presence. 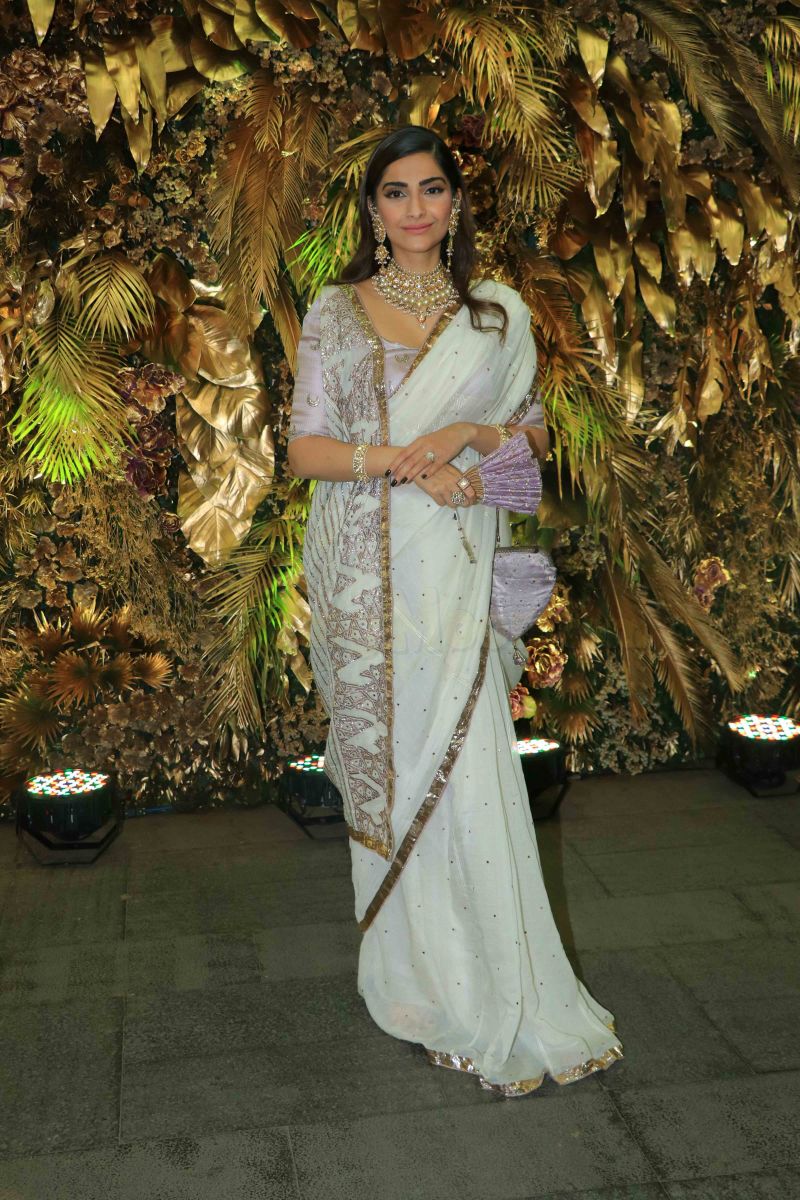 Sonam, for the reception, opted for a white saree and teamed it with a pastel lavender coloured blouse. Adding to the look, she carried a Japanese fan with her, giving it a vintage touch.

Sonam's father, Anil Kapoor was also at the reception. 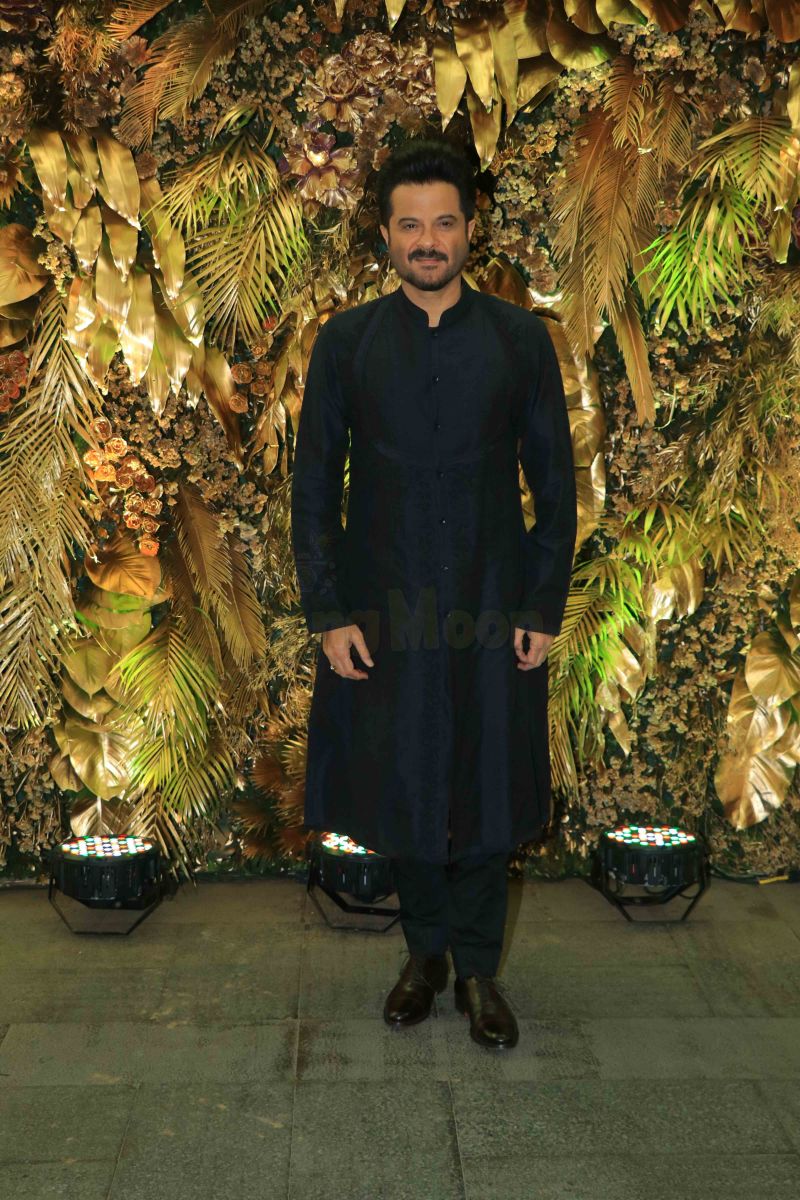 The actor who is gearing up for the release of his upcoming film Malang, looked handsome. 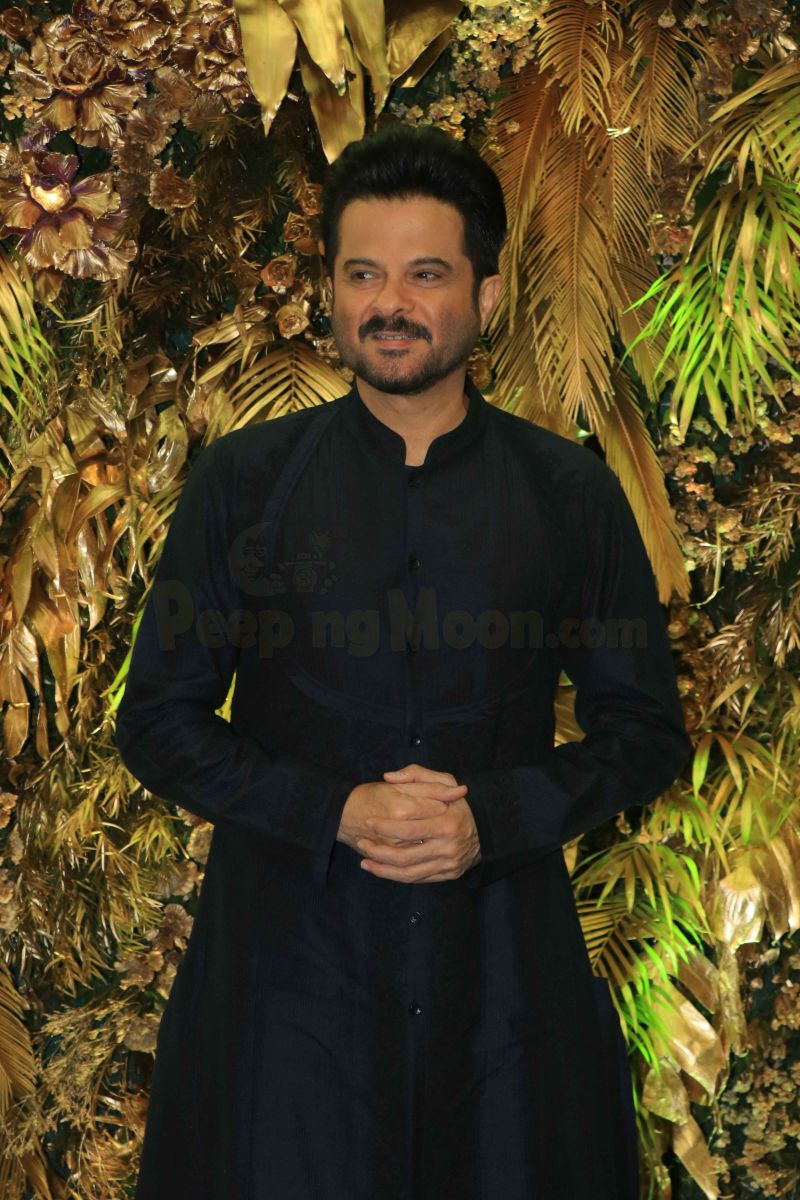 Dressed in black, Anil posed for the cameras with a happy smile.

Arjun Kapoor was accompanied by his girlfriend Malaika Arora. 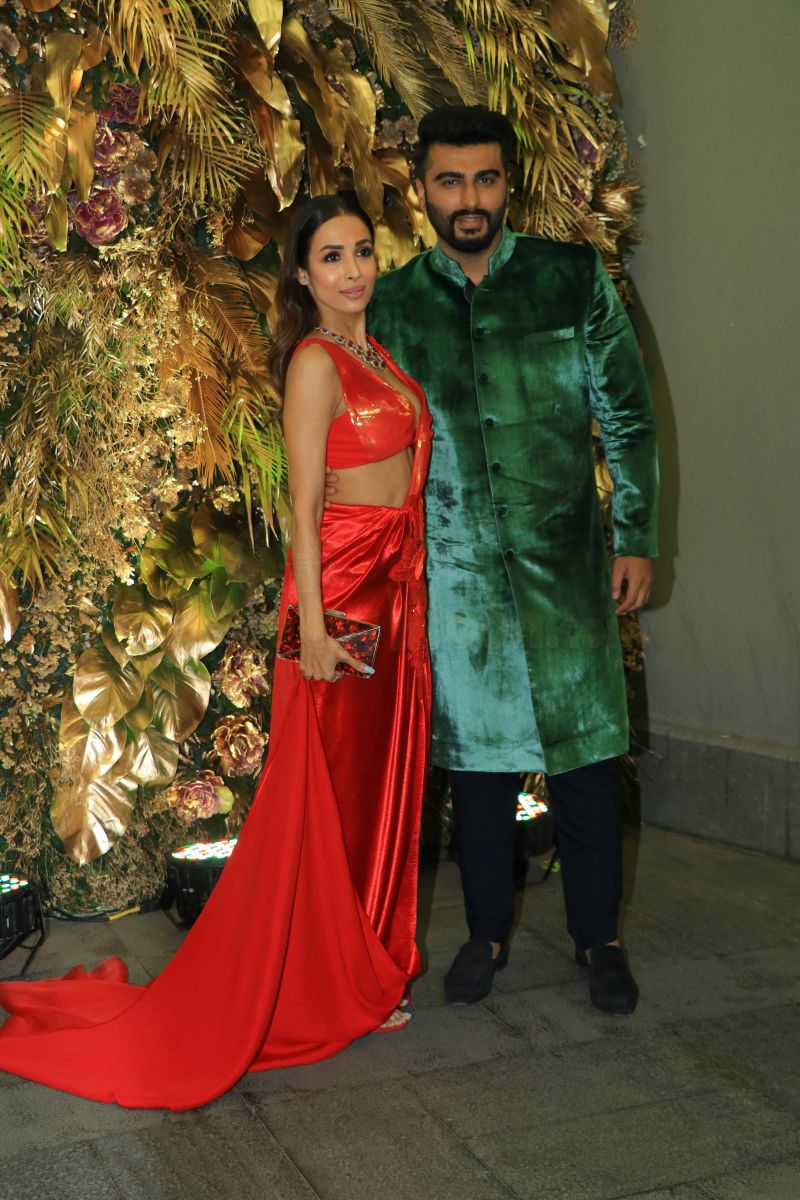 Arjun and Malaika, who made their relationship public on the former's birthday last year, looked stunning as they posed for the cameras together. 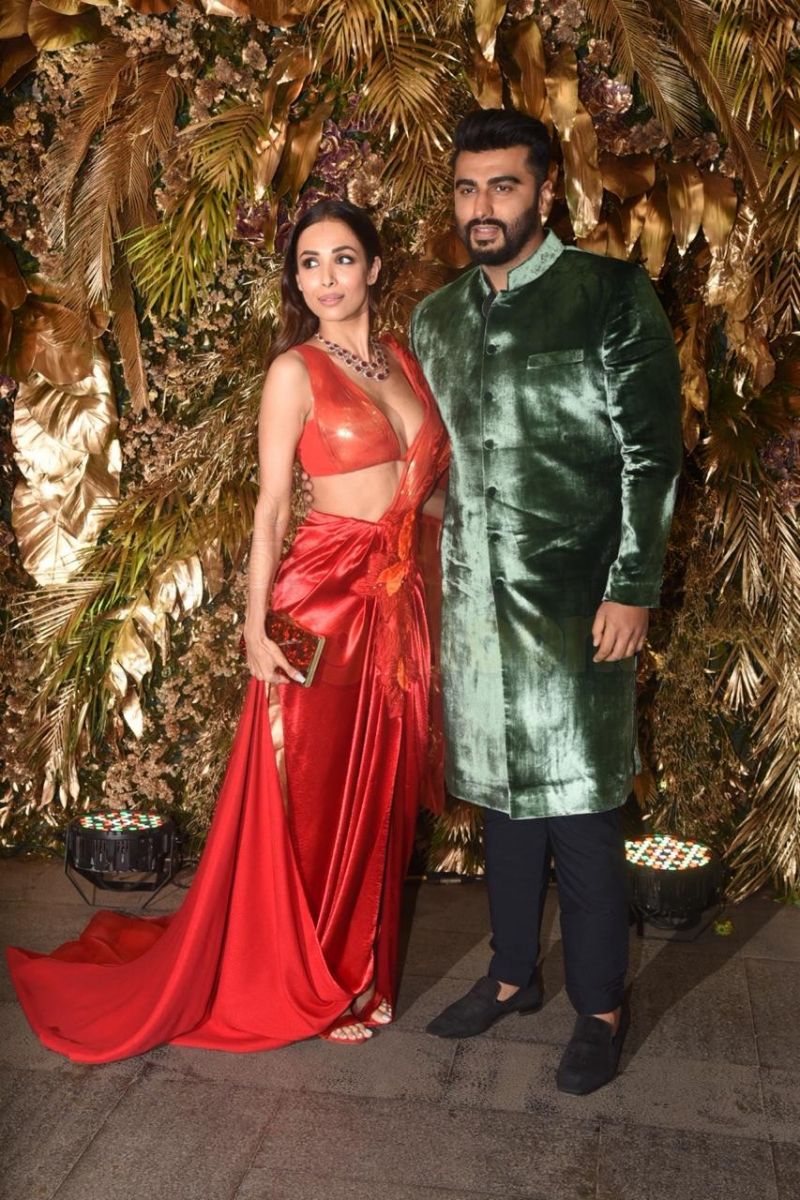 As per reports, Malaika and Arjun will soon tie the knot. 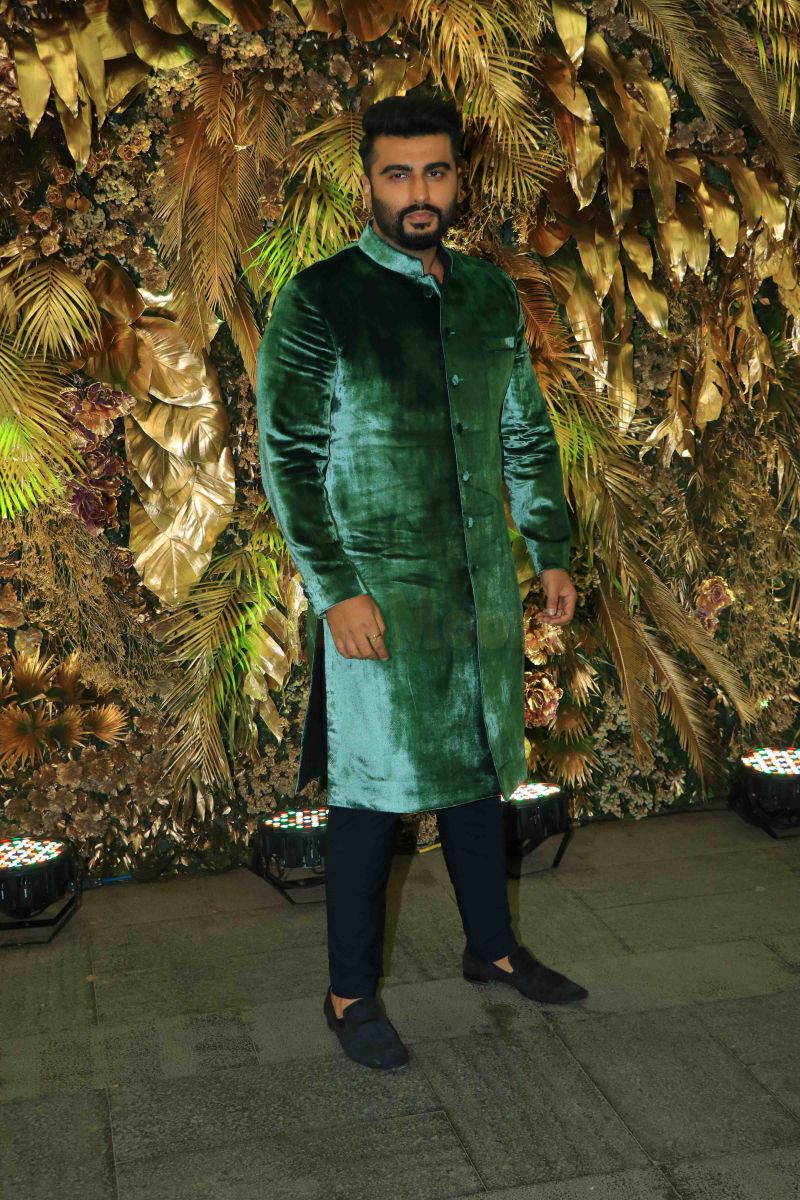 For the reception, Arjun opted for a kurta and teamed it with black pyjama. 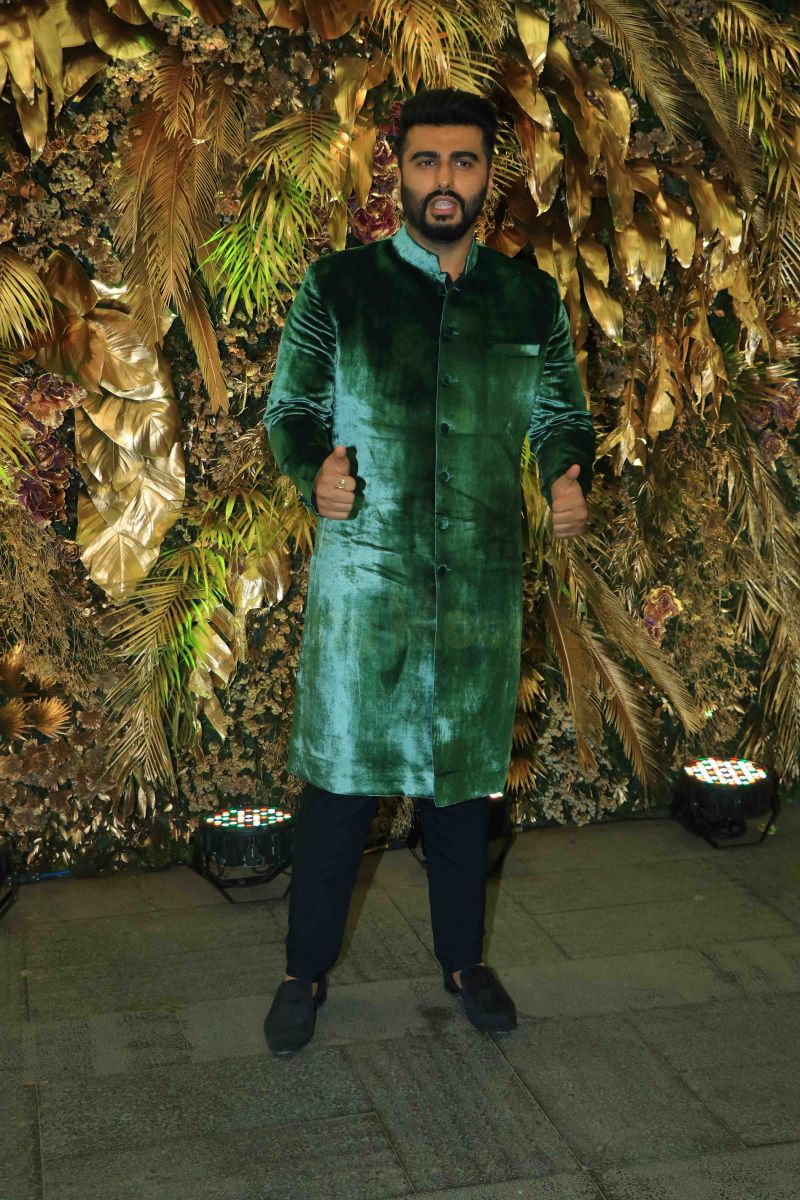 Posing for the cameras, the actor was all smiles. 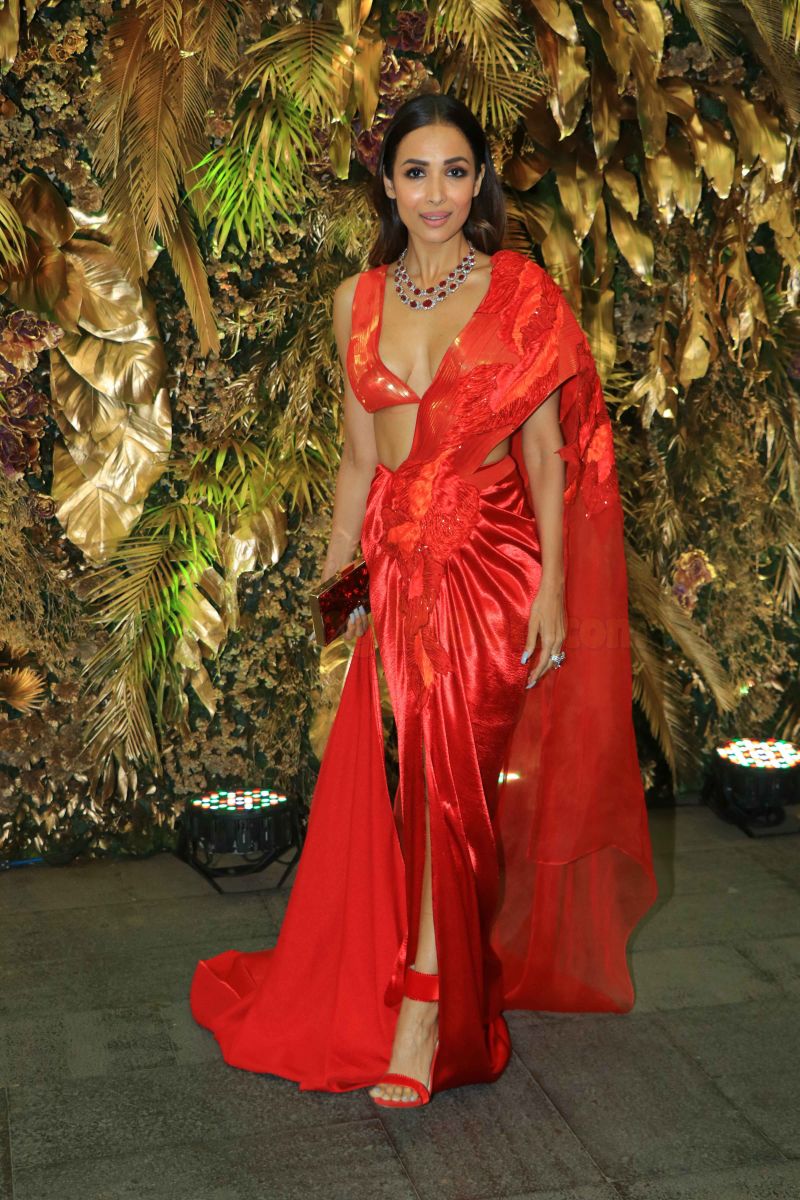 Malaika painted a sizzling picture in a bright red outfit. 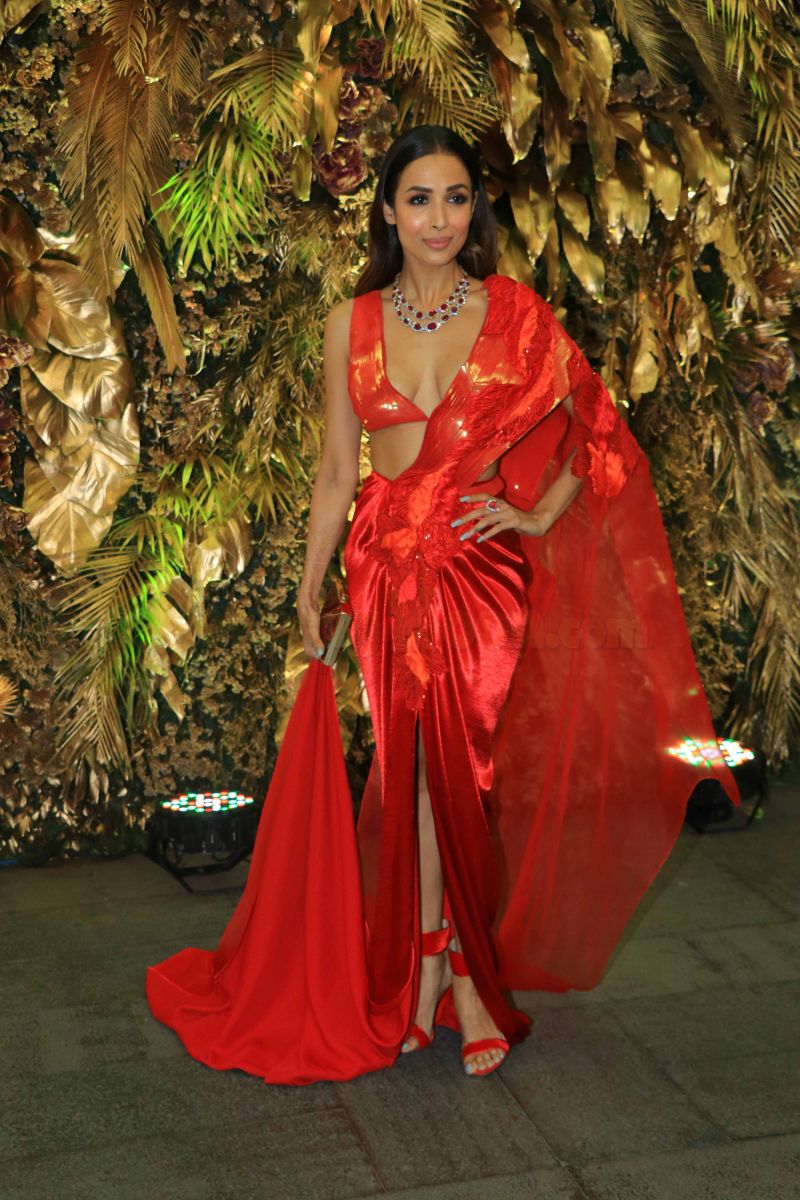 The actress did her hair into soft waves and sported minimal glam. Flaunting her perfectly toned abs, Malaika soared up the temperatures. 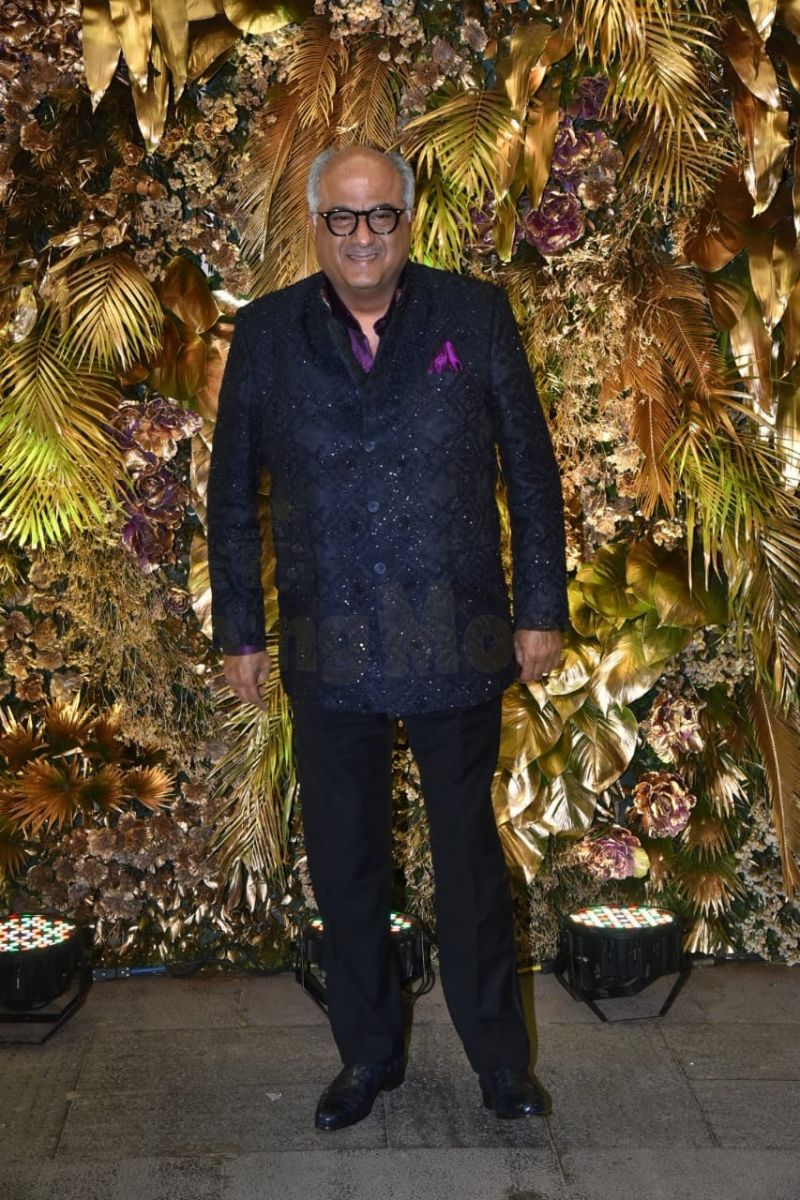 The producer, for the evening, opted for semi-formal Indian wear.

Arjun's sister Anshula Kapoor joined him at the venue. 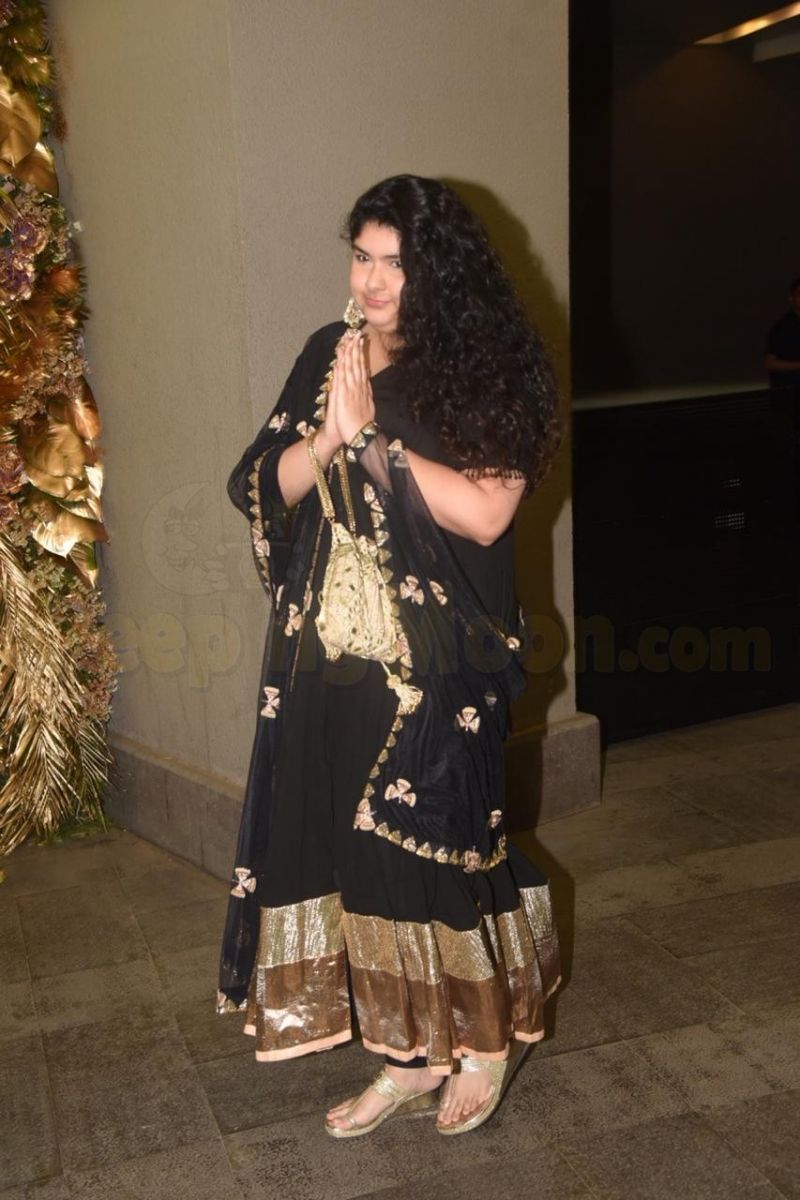 For the reception, Anshula wore black ethnic wear and kept her look classy and simple.

Varun Dhawan joined the celebration with his girlfriend Natasha Dalal. 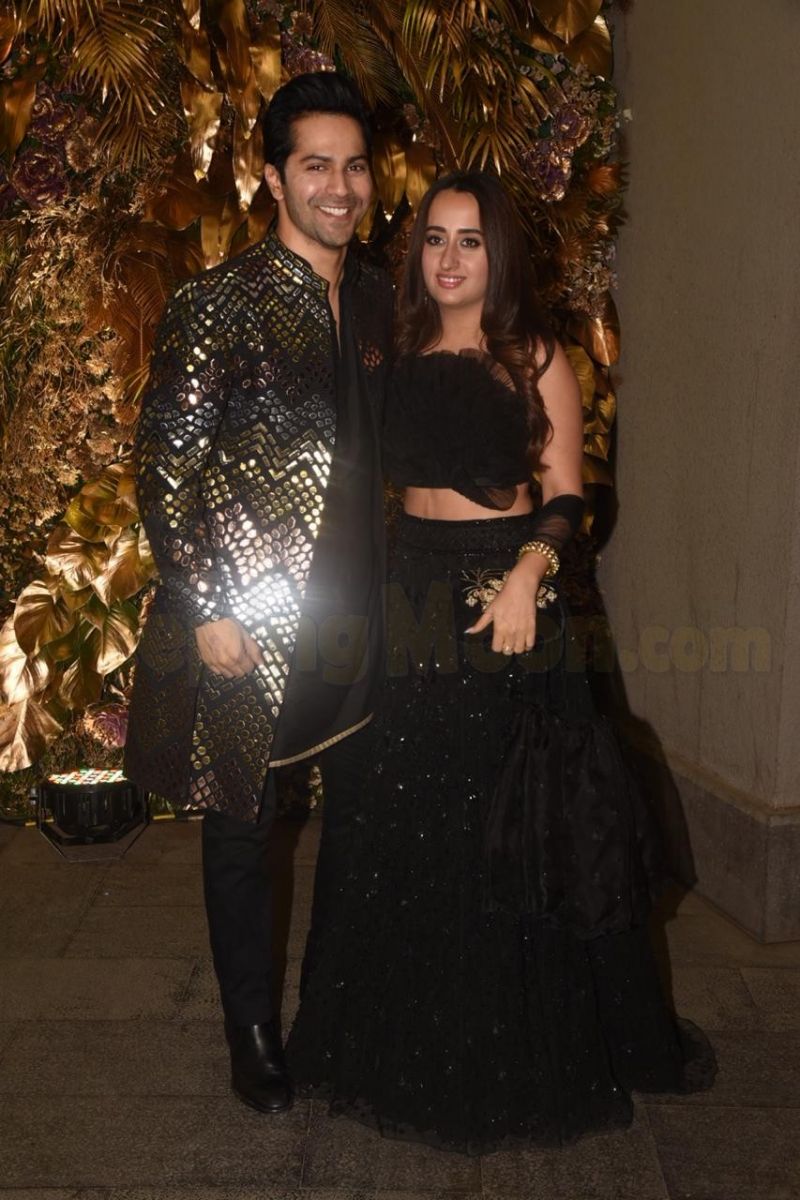 The couple, who is rumoured to tie the knot soon, twinned in black. Natasha looked chic in a black lehenga while Varun was handsome in golden embellished black kurta-jacket. 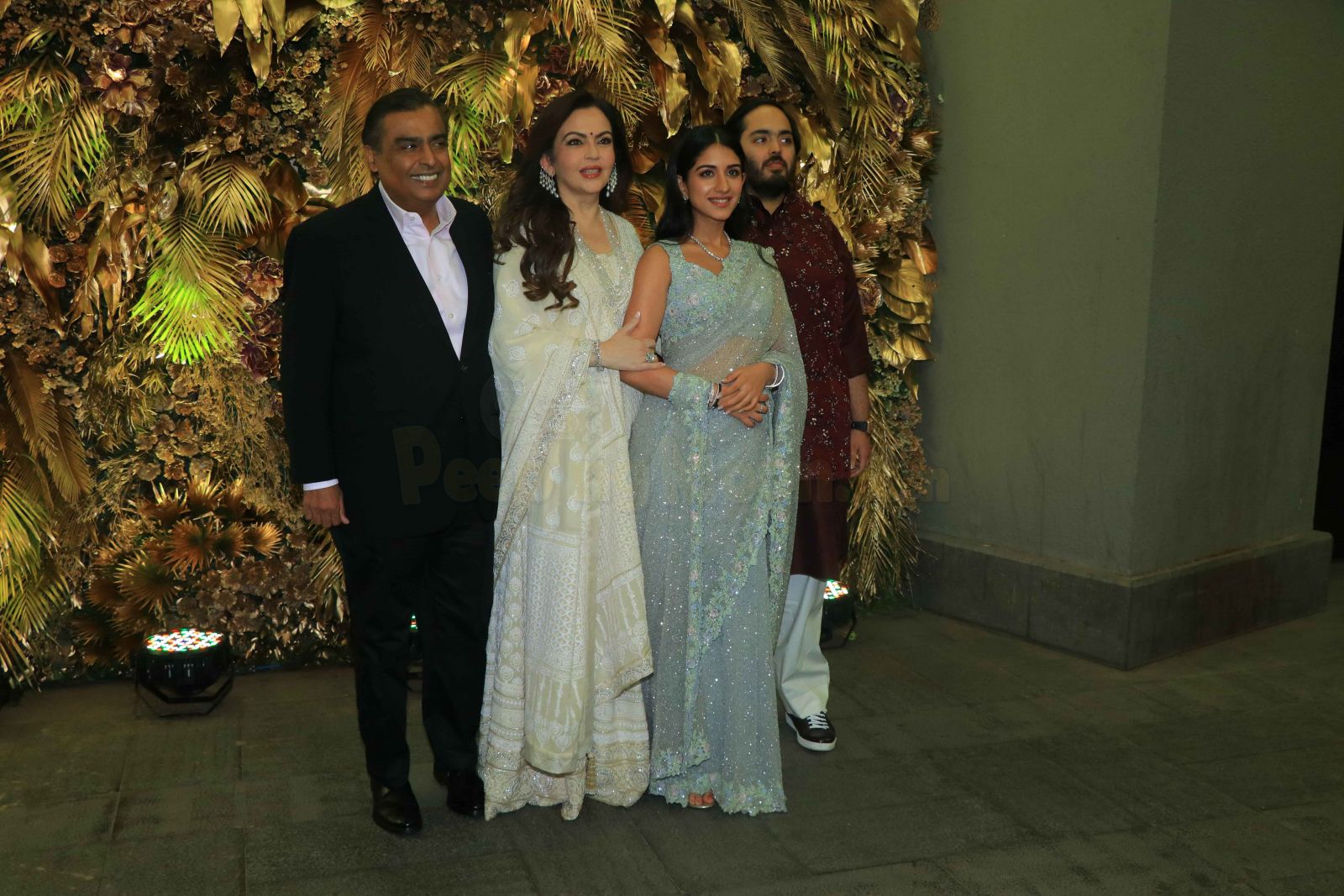 Nita, for the event, wore a white outfit while Radhika was gorgeous in a saree. Mukesh opted for a suit while Anant went in Indian wear.

Shloka Mehta and Akash Ambani too joined their family at the reception. 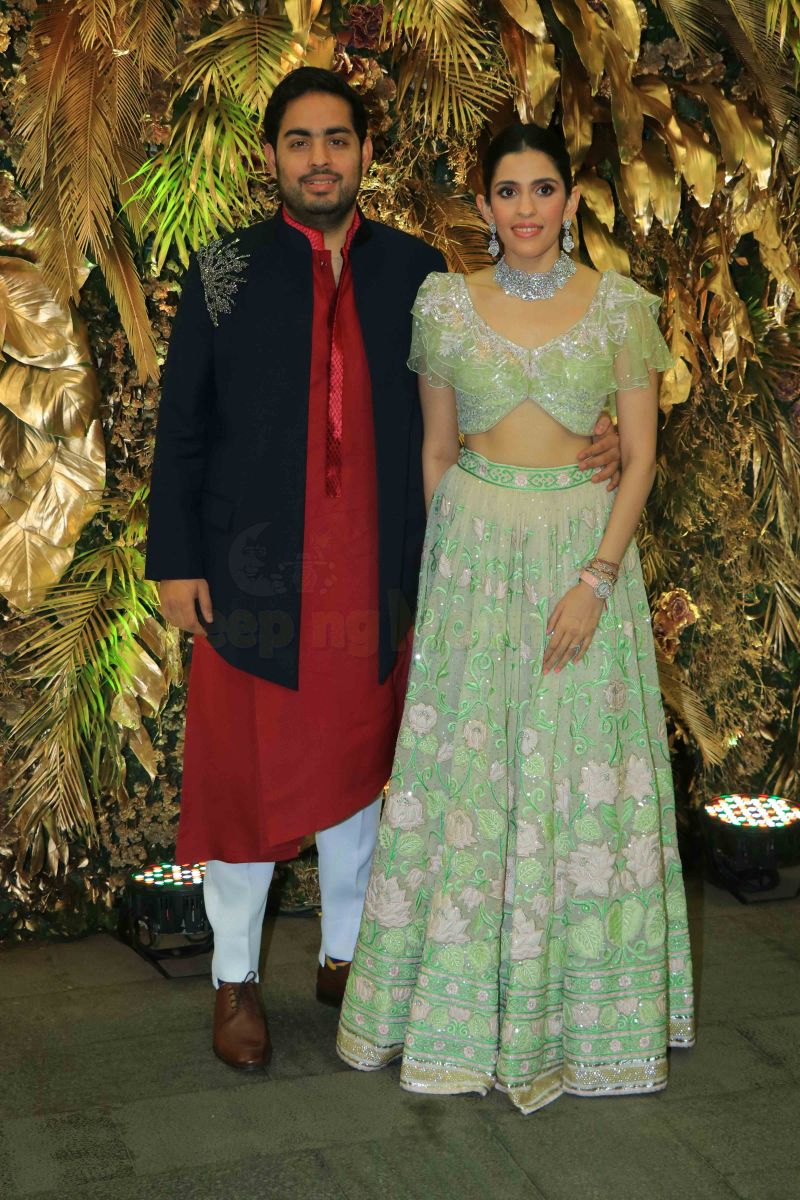 The couple looked stunning together as they posed for the cameras.

Janhvi Kapoor, Ananya Panday and Shanaya Kapoor glam up for a dinner d