Hollywood and Bollywood celebrities are rallying behind Simone Biles after she decided to withdraw from a competition of gymnastics at the ongoing Tokyo Olympics 2020 to care for her mental health. Simone at a press conference following the event said, “I felt like it would be a little better to take a back seat, and work on my mindfulness. I didn’t want the team to risk a medal because of my screw up.” Simone also spoke about her mental health and said, “We also have to focus on ourselves, because at the end of the day we’re human, too. So, we have to protect our mind and our body, rather than just go out there and do what the world wants us to do. Physically, I feel good. I’m in shape. Emotionally, it varies on the time and moment. Coming to the Olympics and being head star isn’t an easy feat.”

Following Simone’s dropping out of Olympic events, British commentator Piers Morgan decided to criticize the 24-year-old icon’s and wrote a couple of scathing tweets. However, he received truckloads of brickbats from netizens as well as Hollywood celebs that came to clap back at the former CNN host's vitriol while they showered praise on Simone for standing up for herself and called her brave and a true sign of leadership.

Athletes are now deemed more courageous, inspiring & heroic if they lose or quit then if they win or tough it out, which is ridiculous.
I blame Twitter’s virtue-signallers for fuelling this culture of celebrating weakness. The real world doesn’t think like that.

So, to sum up today’s big Simone Biles debate, snowflake Twitter is 100% adamant that walking out on teammates at work is brave, strong, inspiring and iconic - and anyone who does it should be celebrated as one of the world’s great heroes….
Good to know. pic.twitter.com/HclTrBbfY3

hey Piers, you couldn't even begin to conceive of what it could possibly feel like to be an athlete at that level with that amount of pressure. sit down. you're impulse to stir the pot is not only routine but terribly unbecoming and boring.

I assure you that Simone Biles helped more people who are suffering from depression and anxiety in one day than Tucker Carlson, Clay Travis, Matt Walsh, and Piers Morgan have in their lifetimes.

Again, please let @piersmorgan (who is so “heroic and brave” that he blocked me) know that I said he’s a gutless degenerate of a misogynistic hypocrite and to go fuck himself ‘cuz clearly no one else will. Thanks! https://t.co/GbKkQr1w13

To update you. He is comparing him walking off set to Simone pulling out of the Olympics. He said he was stressed so how is it not the same thing. You’re lucky you’re blocked.

If @piersmorgan successfully attempts one cartwheel on a live broadcast, I will pretend to consider his thoughts on Simone Biles.

It’s amazing that women get called “emotional” when I have never seen more men throwing tantrums about Simone Biles.

Not surprised to see this from the likes of @piersmorgan A person (I use that term lightly) that sits on his brains and criticizes people for a living. @Simone_Biles is a hero. She stood up for herself in a very difficult position. https://t.co/djmKA4uqe9

Brianna Keilar dragging the shit out of Piers Morgan this morning is EVERYTHING! pic.twitter.com/tHYce9D8NB

Am I good enough? Yes, I am. The mantra I practice daily. @Simone_Biles, we are proud of you and we are rooting for you. Congratulations on the the silver medal, Team @USA!

Someone said it best. @Simone_Biles already won. She is a class act. Withdrew from team competion after vault... stayed and cheered on her teammates... got them chalk for their hands.. encouraged.. hugged them. She already won. Congrats on the silver medal! @TeamUSA @USAGym

The idea that some believe that showing your vulnerabilities publicly is somehow ‘soft’ is just ridiculous. I’m so thankful that loved ones close to me helped me to get out of that way of thinking from my upbringing b/c it made me a better man #SimoneBiles

I can't imagine the pressure Simone has been feeling. Sending her SO much love. It easy to forget she's still human. WE LOVE YOU.

Larry Nassar sexually assaulted many many gymnasts including Simone Biles .that trauma lives deep inside all survivors as ptsd and can be triggered under stress she is a hero and will always be

.@Simone_Biles, you're solid gold in my book.

Yes. This is what a champion looks like. So proud of #SimoneBiles and the entire gymnastics team. How lucky we are to have you all as our Team USA. https://t.co/4TrcUXuQpm

The GOAT @Simone_Biles having to sit out--because a man is not held accountable to do the same-is shameful. Biles still cheering on her teammates, even while taking care of herself, is one of the many graces that make her a true champion, forever & always. We love u Simone. https://t.co/nrfaJhoaja

Gratitude and support are what @Simone_Biles deserves. Still the GOAT and we are all just lucky to be able to see her in action. And congrats and tks to the tough as nails #TeamUSA @sunisalee_ , @ChilesJordan, @grace_mccallum2 for being role models and champs

The wonderful Simone Biles pulls out of an Olympic event to protect her well being and I can’t even bring myself to leave Twitter. God I’m so fucked.

Thank you for everything you do.

Simone Biles is still the most amazing athlete ever

Everyone judging @Simone_Biles doesnt know their foot from their asshole when it comes to being in her position.Shes on the Olympic team while you’re on Twitter.Whatever is going on cannot be grasped from outside.She’s doing the absolute best she can given the situation she’s in.

Sending nothing but love and positivity to the @Simone_Biles

The GOAT @Simone_Biles having to sit out--because a man is not held accountable to do the same-is shameful. Biles still cheering on her teammates, even while taking care of herself, is one of the many graces that make her a true champion, forever & always. We love u Simone. https://t.co/nrfaJhoaja

Your health and peace matters. You’re reminding Black women that we can take the space we need for ourselves.

People go back to their lives after the game is over but these athletes struggling w/ mental health issues don’t get to switch channels. The issues don’t magically disappear. The pressure to be on & perfect all the time is immense. Sending love to @Simone_Biles & others! https://t.co/R54RxL917V

Nothing but respect for @Simone_Biles today. Champion level leadership. #Olympics

Seems to me @Simone_Biles is just showing a new way to win - by prioritizing being a person that YOU are proud of, and by making your life and the lives of the people around you as good as possible. It’s a whole life, not a series of competitions with filler in between.

You are incredible #SimoneBiles . I wish I'd had the strength and bravery in my 20s to prioritize my mental health the way you and @naomiosaka have done. You have set an incredible precedent for all the young girls who look up to you, and to this gal in her 30s. Thank you . pic.twitter.com/iM41bdvA8L

Bollywood celebs also rallied behind Simone for her decision to drop out. Priyanka Chopra Jonas, Deepika Padukone, Varun Dhawan, Alia Bhatt and several others hailed Simone’s decision and took to social media to send out messages for the athlete and for people grappling with mental health issues. Check out the posts below. 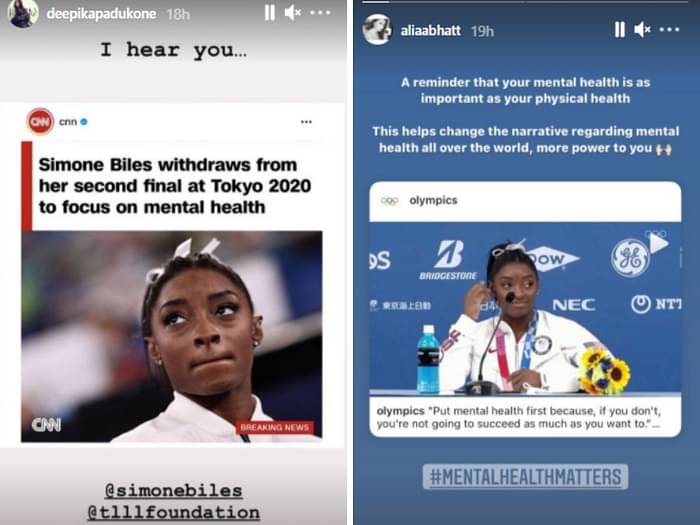 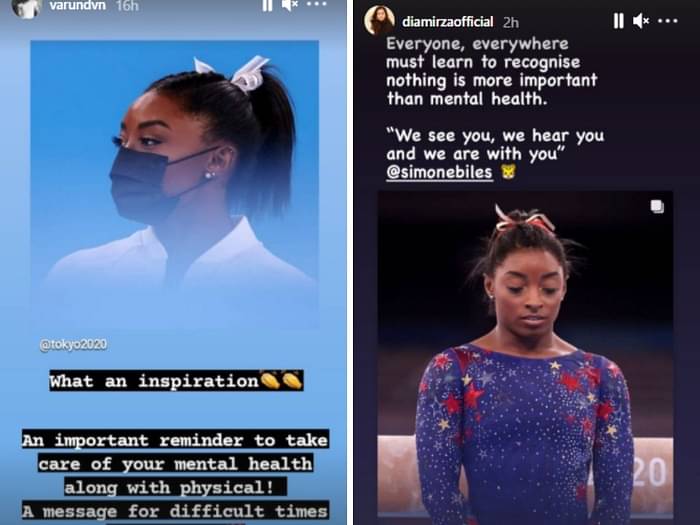