Ellen DeGeneres ends her talk show after 19 years, says 'not quitting because of toxic workplace charges'

After 19 years, Ellen DeGeneres has decided to pull the plug on her hit talk show The Ellen DeGeneres Show. The daytime television variety comedy talk show starting rolling in 2003 and ever since, the comedienne-host has anchored 18 seasons. The show will go off air after its 19th season in 2022. In a video released in 2019, Ellen had revealed that she has extended her contract till 2022 by saying, "Sometimes in a relationship, you need to take a break. But I don’t. You’re stuck with me. I just signed for three more years."

“When you’re a creative person, you constantly need to be challenged — and as great as this show is, and as fun as it is, it’s just not a challenge anymore,” DeGeneres told a Hollywood news website, discussing the move publicly for the first time.

When asked the reason behind ending her show, the comedienne said, "I was going to stop after season 16. That was going to be my last season, and they wanted to sign for four more years and I said I’d sign maybe for one. They were saying there was no way to sign for one. “We can’t do that with the affiliates and the stations need more of a commitment.” So, we [settled] on three more years, and I knew that would be my last. That’s been the plan all along. And everybody kept saying, even when I signed, “You know, that’s going to be 19, don’t you want to just go to 20? It’s a good number.” So is 19. (Laughs.)" 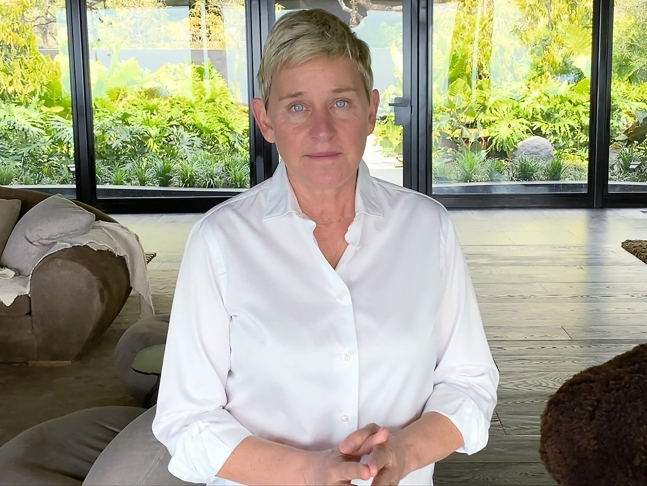 When asked about the serious toxic workplace charges against her last year, Ellen confidently said that it's not the reason why she is quitting. "It almost impacted the show. It was very hurtful to me. I mean, very. But if I was quitting the show because of that, I wouldn’t have come back this season. So, it’s not why I’m stopping, but it was hard because I was sitting at home, it was summer, and I see a story that people have to chew gum before they talk to me and I’m like, “OK, this is hilarious.” Then I see another story of some other ridiculous thing and then it just didn’t stop. And I wasn’t working, so I had no platform, and I didn’t want to address it on [Twitter] and I thought. “If I just don’t address it, it’s going to go away,” because it was all so stupid."

She added, "I became a comedian because I wanted to make people feel good. It started when I was 13 years old when my parents got divorced, and I wanted to make my mother happy. My whole being is about making people happy. And with the talk show, all I cared about was spreading kindness and compassion, and everything I stand for was being attacked. So, it destroyed me, honestly. I’d be lying if I said it didn’t. And it makes me really sad that there’s so much joy out there from negativity. It’s a culture now where there are just mean people, and it’s so foreign to me that people get joy out of that. Then, on the heels of it, there are allegations of a toxic workplace and, unfortunately, I learned that through the press. And at first I didn’t believe it because I know how happy everybody is here and how every guest talks about, “Man, you have a great place here. Of all the talk shows I’ve done, everyone here is so happy.” That’s all I’ve ever heard."