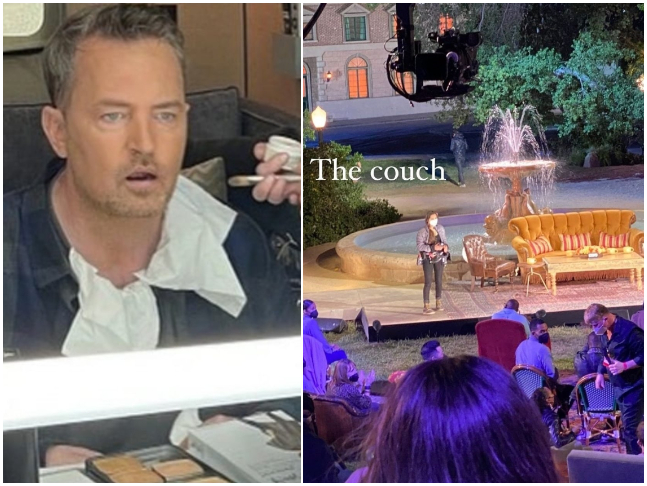 Here is some great news for the fans of American sitcom FRIENDS. The fans who have been waiting long enough for the reunion have reasons to rejoice as the filming has begun, going by the pictures that are going viral on internet. Inside pictures from the shoot have been shared online by Andrea Bendewald, who is one of Jennifer Aniston's oldest friends. She shared a picture of sipping coffee on the sets of the Central Perk, which is situated at Warner Bros. studio.

In the now-deleted picture, Andrea also shared a glimpse of the famous orange couch from the show. However, the lead star cast of Aniston, David Schwimmer, Matthew Perry, Courteney Cox, Lisa Kudrow, and Matt LeBlanc were not seen.

RECOMMENDED READ: FRIENDS creators reveal Matthew Perry convinced Julia Roberts for a cameo on the sitcom with a paper on quantum physics

| More Pictures of the #FriendsReunion set !!
- it's actually happening pic.twitter.com/O86docBSR1

Other than Andrea, Matthew also shared a deleted behind-the-scenes picture from the sets but fans managed to grab a screenshot. Matthew captioned the photo, “Seconds before eating a makeup brush. Not to mention reuniting with my Friends."

#MatthewPerry on Instagram: "seconds before eating a makeup brush. Not to mention reuniting with my Friends."#FriendsReunion pic.twitter.com/SDuzabFJpa

The FRIENDS is one of the most popular sitcoms ever and ran from 1994 to 2004. The Friends Reunion was scheduled to film last summer but due to Covid-19 pandemic was delayed. Recently, Schwimmer who plays Ross, appeared on The Graham Norton Show and said that the actors were appearing as themselves and not reprising their roles from the show. He said, “We're not in character ... we're all ourselves, the real people. But there is one section, I don't want to give away -- where we all read something." The special reunion episode is scheduled to premiere later this year.