Here’s some good news for the LGBTQ+ community as they’ve just gained a new superhero. Marvel revealed this week that superhero character Peter Quill, known as Star-Lord and played on-screen by Chris Pratt is bisexual. The big reveal happened in a new comic book released on December 9 titled Guardians of Galaxy No. 9. Reportedly, it includes a story I Shall Make You a Star-Lord that describes Star-Lord’s background and sexual orientation.

In the story, Peter Quill during his time on the (mythical) planet Morinus, where he finds himself after sacrificing his life to defeat the New Olympians, is befriended by two humanoids named Aradia (woman) and Mors (man) to experience their ‘togetherness’. However, initially, he rejects their advances and tells them he had to get back home to his partner Gamora (played by Zoe Saldana), but after twelve years together he starts a relationship with both. 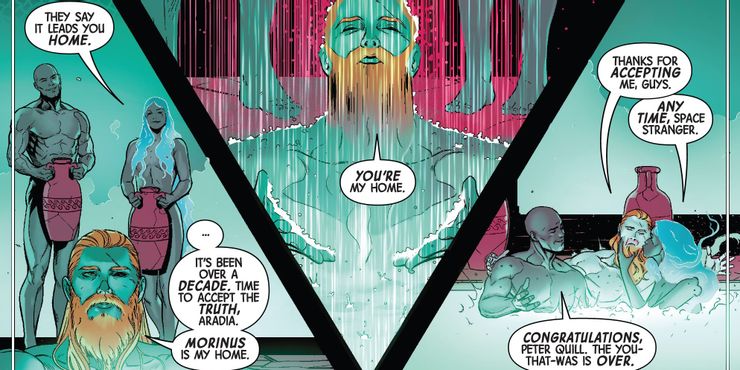 During one scene written by Al Ewing, in the House of Death and Rebirth, Peter takes a bath in a special temple alongside both Aradia and Mors. They close in for a hug and Peter tells them, “It's been over a decade. Time to accept the truth; you're my home.” To this Mors says, “Congratulations, Peter Quill. The you-that-was is over.” Peter adds, “Thanks for accepting me, guys.” The trio’s love reportedly lasted for more than 100 years, before Peter returns to his original timeline to help the Guardians defeat the King in Black.

Since the comic released, fans have been wondering what will this mean for the Marvel Cinematic Universe’s take on Star Lord’s sexuality within future films. So far in MCU, Peter has always been with Gamora but that does not mean he cannot be bisexual, it’s just that the films haven’t explored that aspect yet. It’s unclear whether the character’s sexuality will be addressed in the upcoming Marvel films Guardians of the Galaxy Vol.3 and Thor: Love and Thunder.