Justin Bieber along with wife Hailey Baldwin, joined Kendall Jenner for an Instagram Live. However, the pop singer’s ‘tone-deaf’ comments resulted in a huge backlash on the internet after he spoke about being ‘blessed’ with a life of luxury during the COVID-19 lockdown.

The three celebrities seem to have not understood the grim situation everyone around the world is living in. During the session, Justin said, “Obviously you know we've worked hard for where we're at so it's like we can’t feel bad, you know, the things we have." However, he told his wife and her best friend that he felt bad for those who weren't in such a privileged position. He said, “But I think, just us taking that time to acknowledge that there are people who are really crippling is important.” Kendall agreed, nodding her head and saying, “So blessed. I think about it all the time.”

Absolute worms for brains... unless you're Lady Gaga or Leslie Jordan, if you're a celebrity, PLEASE LOG OFF pic.twitter.com/sgms7SsMcJ

However, fans watching the live video were unimpressed. One user tweeted, “So grocery workers and farmers don’t work hard! This is the reason I’m no longer a believer. I grew up and saw the man child Justin Bieber is... ever since he got marry he got worms for brains,” while another wrote, “Celebrities really are the weakest link. They don't even realize how selfish and unconcerned they are.” Another wrote, “Thank god they’re “acknowledging” us. SO GRATEFUL. Suddenly my debts are wiped clear and im no longer unemployed.” Another wrote explaining the gravity of the situation, “Lost my job at the factory, but so blessed to be reminded of this blessing.” 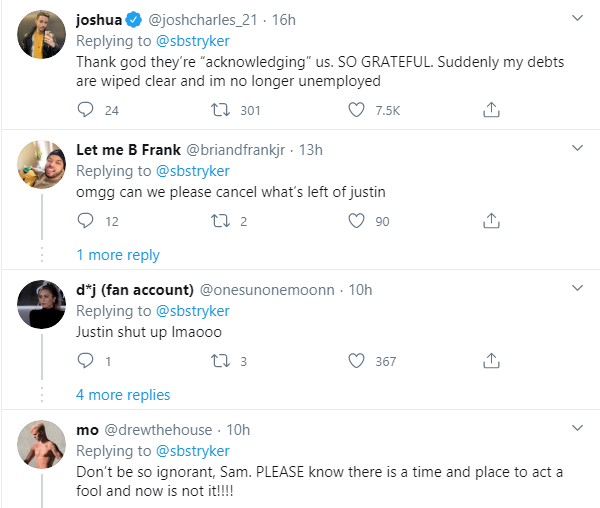 Another user wrote, “Kendall’s silence when Justin said we worked hard for where we’re at cuz she knows she didn’t and was just born into fame and money LMAO.” Others were not so polite as one user wrote, “Ohhhh my god i’ve never wanted someone to shut the f*** up more @justinbieber @KendallJenner and the other one you SUCK w your privileged-disconnected-from-reality asses.”