Advertisement
HomeFeaturedBirthday Special: With a lot of ‘Dum Laga Ke Haisha’, Bhumi Pednekar has proved that she indeed is a ‘Sonchiriya’ waiting for her ‘Takht’

Bhumi Pednekar is that rare star, who has made a name for herself as an actress par excellence, in the today's league of actors. She has emerged as the go to choice of filmmakers when they want to cast someone for an author backed role in female-centric films. Bhumi, who turns 31 years old today, has one of the most enviable line-up of films in her kitty, something that will put her male counterparts to shame. However, what the actress has earned through sheer hard work now is not something she got on a silver platter.

Starting as a casting assistant, Bhumi made a splashing debut in Dum Laga Ke Haisha in 2015 which earned her accolades as well as the Filmfare Award for Best Female Debut. Irony, she was soon written off by many since she had to put on a lot of weight for her role in the film and industrywallahs were sceptical whether she will be able to lose weight and fit into the stereotype of a Hindi film heroine. However, two years later, Bhumi proved everyone wrong with her svelte figure in her next outing in Toilet: Ek Prem Katha. Playing a headstrong woman in a rural setting, she managed to hold her own opposite ace performers like Akshay Kumar, Anupam Kher and Sudhir Pandey. The film based on the problem of open defecation in the country was a sleeper hit and became one of the highest-grossing Indian films of all time.

In 2017, Bhumi teamed up once again with Ayushmann Khurrana for Shubh Mangal Saavdhan, a film on erectile dysfunction. She effortlessly played the honest-to-goodness young woman in search of love but was just shy of being typecast in such a role. However, Bhumi did not let the naysayers and the critics gain an upper hand and followed it up with an exemplary performance in Lust Stories. She managed to shine bright in the anthology of stories playing a maid who is having an affair with her employer.

However, her prominence and superiority over her peers came to fore in a film that was critically acclaimed for its starcast’s performance. Playing a young housewife on the run in rural Chambal, Bhumi starred alongside Sushant Singh Rajput, Manoj Bajpayee, Ranvir Shorey and Ashutosh Rana in Abhishek Chaubey’s crime drama Sonchiriya. In preparation for her role she underwent training to fire a gun and learn mannerisms and gait of her character. Bhumi’s career span has been one on the climb ever since she made her debut. Continuing to play her forte of headstrong small-town women, she starred in Bala and Pati, Patni Aur Woh. She walked away with a lot of applause for the latter film as many critics noted that she brings a semblance and intelligence to the seemingly frivolous film. 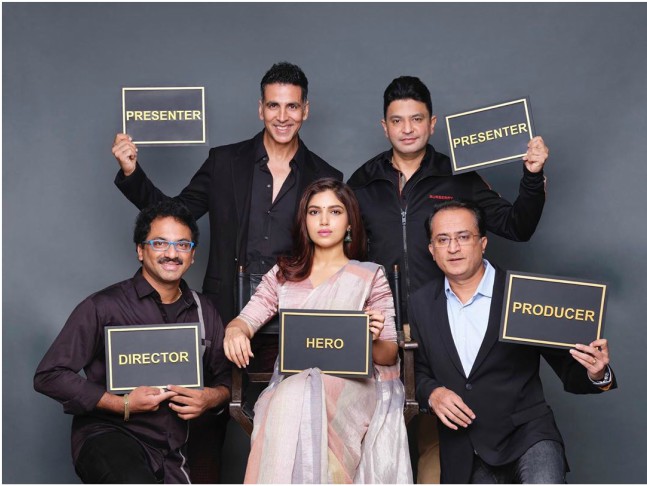 Our birthday star has some of the most enviable line-up of films. Her upcoming film Dolly Kitty Aur Woh Chamakte Sitare is up for release on OTT where she will share screen space with Konkana Sen Sharma. She will also portray an Indian Administrative Service officer in Durgavati, a remake of the Telugu horror film Bhaagamathie that is presented by none-other-than Akshay. She also will be playing a pivotal role in Karan Johar’s Mughal historical drama Takht and is scheduled to team up with Rajkummar Rao in Badhaai Do, the sequel to the 2018 comedy Badhaai Ho.

Going by Bhumi’s quantum of work and the lucrative films, we’re sure the future belongs to her and the world will definitely kiss her feet. All hail, Bhumi Pednekar!