Dharma Productions' recently released film Jug Jugg Jeeyo is high on entertainment and its box-office collection is proof. Along with that, the family entertainer is home to the most talented and good-looking stars. Right from the graceful Neetu Kapoor, the ever-young Anil Kapoor, to the gorgeous Kiara Advani and the energetic Varun Dhawan, Raj Mehta's directorial is grand and beautiful visually and strong content-wise.

While Jug Jugg Jeeyo is being watched on loop in theatres, people are taking down notes when it comes to fashion. The style files of Jug Jugg Jeeyo's star cast are top-notch. As the film crosses Rs.100 crores globally, here's decoding some of the best looks of the star cast. 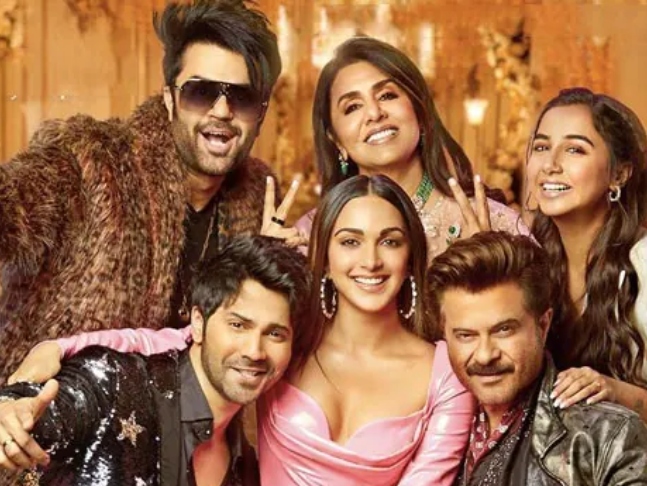 Neetu Kapoor returned to the big screen with Jug Jugg Jeeyo. She essayed the role of Geeta, a headstrong matriarch of the family, who learns about her husband's extra-marital affair and gracefully tackles the situation with her mind and heart. Her characteristics were reflected in her style file. In Jug Jugg Jeeyo, Geeta's daughter Ginny is getting married, hence the actress' outfits were vibrant, colourful and elegant.

In one of the sequences in Jug Jugg Jeeyo, the veteran actress wore a yellow sharara set paired with a dupatta. The outfit was adorned with sequins, zari and mirrorwork. Styled by Eka Lakhani, Neetu opted for jewellery designed by Anmol Jewellers. 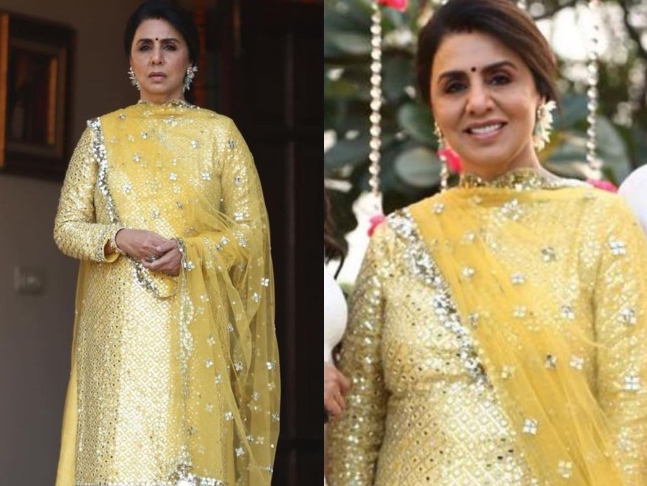 For the Mata Ki Chowki sequence in Jug Jugg Jeeyo, Neetu wore a green, pink and golden salwar kameez. She was styled by Eka Lakhani. The actress' look was rounded off with a simple mangalsutra and earrings. 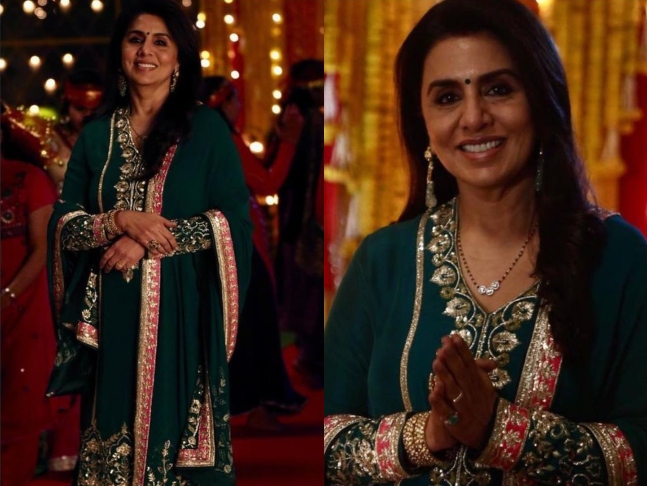 For her on-screen re-marriage with Anil Kapoor, Neetu was seen in a red and golden Sabyasachi outfit. She completed her look with a choker, earrings and a maangtika from Sabyasachi's jewellery collection. 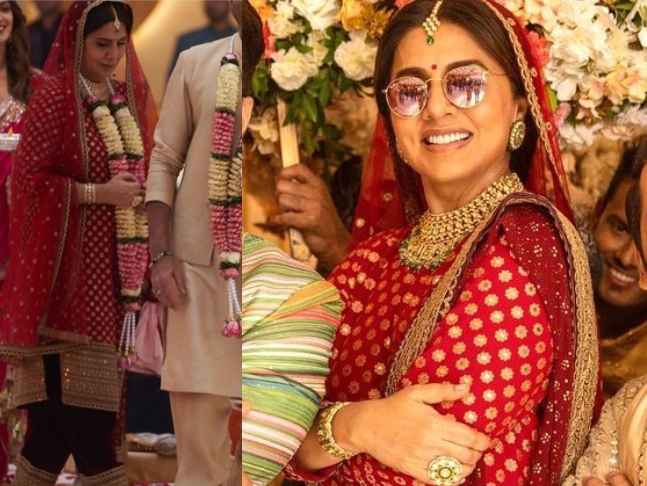 Kiara Advani's Naina represented every Indian modern girl. Her style was classy, desi and fun. While Kiara nailed every look of Naina, her Indian outfits are certainly a hit among young bridesmaids.

Kiara added a pop of colour with an Akanksha Gajria Patiala suit. Styled by Eka Lakhani, the actress went easy on accessories. This is definitely a bookmark-worthy outfit for your next casual outing. 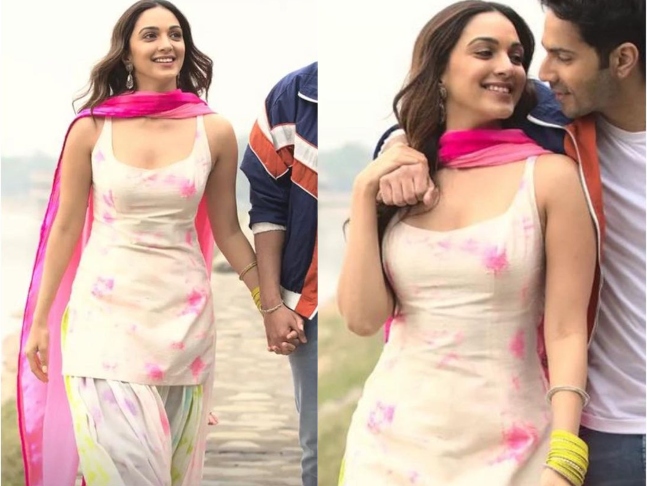 The actress looked stunning in designer Sawan Gandhi's multicolour Parsi and mirror work lehenga from the collection Sunehri. She completed her look with a necklace and bangles. 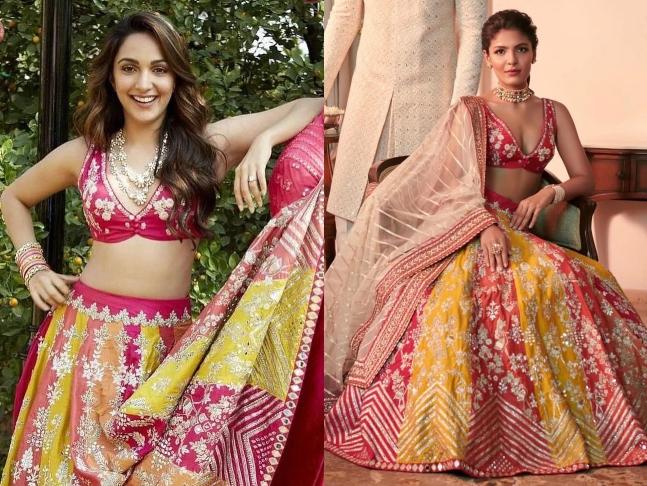 For one of the on-screen wedding festivities, Kiara wore a white lehenga with an embroidered bustier blouse and an organza dupatta by Amrita Thakur. She rounded off her look with earrings from Anmol Jewellers. Prajakta Koli played the bride-to-be Ginny in Jug Jugg Jeeyo. Like every millennial bride, her style was refreshing and easy to replicate. It was all about vibrant colours, delicate prints and trendy cuts.

Prajakta was seen in an ivory one-shoulder blouse which was paired with a lehenga adorned with mirrorwork. This was by Abhinav Mishra. She accessorised it with a choker and earrings designed by Anmol Jewellers. 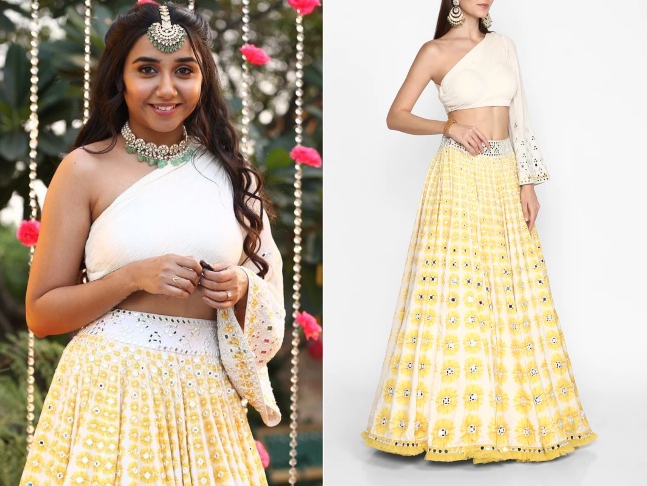 For one of the key sequences, Prajakta wore a purple chand boota crop top and skirt set designed by Vvani by Vani Vats. She completed her look with jewellery from Karan Johar's brand Tyaani Fine Jewellery. 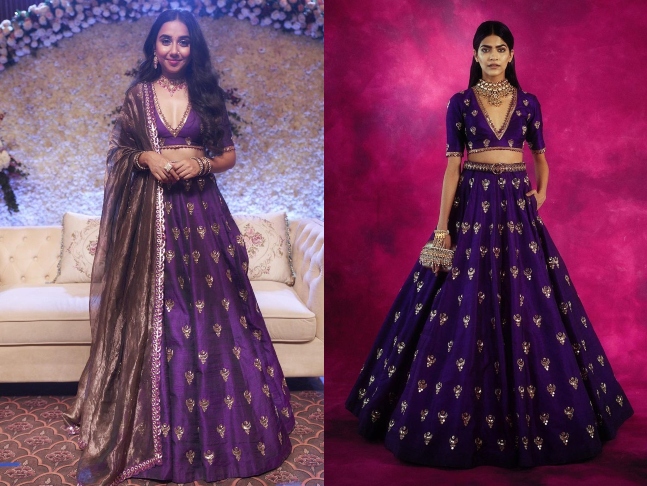 Anil Kapoor played the role of Bheem in Jug Jugg Jeeyo. After cheating on his wife Geeta, he decides to get back to her and that's when the senior Saini couple plans to re-marry. For this sequence, Eka Lakhani chose a Sabyasachi kurta-pyjama set for the veteran actor. 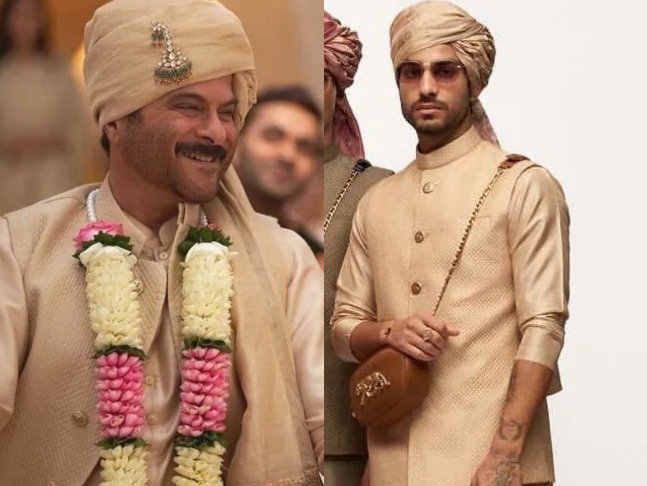 Varun Dhawan played the role of Kukoo Saini in Jug Jugg Jeeyo. He was the bride's brother. For one of the sequences, Varun wore a hot pink kurta adorned with mirror and Resham work from designer Abhinav Mishra's shelf. 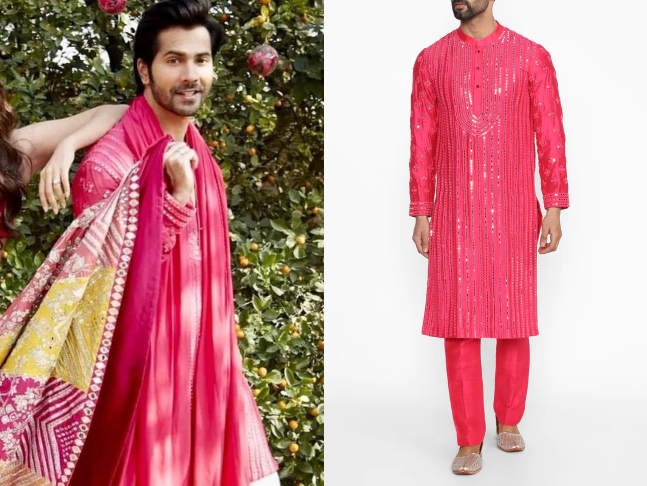 Heavily inspired by Karan Johar, Maniesh Paul's looks as Gurpreet in Jug Jugg Jeeyo were the most interesting ones.

Which is your favourite look?