Torchbearer of all things glamorous since the late ‘80s, 'Dhak Dhak' Queen Madhuri Dixit Nene turns a year older today but continues to age like a fine wine. Known for her voluminous curls, bold sartorial choices, and that perfect smile, this beaut was indeed a style icon and country’s female superstar besides the Khans, Kapoors, and the Bachchans.

In a career spanning over three decades, Madhuri has mesmerized with her acting chops and style statement in over 70 films. The recipient of Filmfare awards and Padma Shri has been one of the highest-paid actresses of her era and appeared in Forbes India’s Celebrity list 7 times. Although her debut film Abodh (1984) failed to be a commercial success, she rose to fame with Tezaab (1988). Later, she became an overnight success and bagged leading roles in box-office hits like Ram Lakhan, Khalnayak, Kishen Kanhaiya, Saajan, Dil, Dil Toh Pagal Hai, Hum Aapke Hai Koun…!, Devdas, amongst many others. Post her sabbatical from B-town she made a comeback with Aaja Nachle (2008) and continued to spread her charisma in the next decade with Dedh Ishqiya, Bucket List, and latest to the list, Kalank. 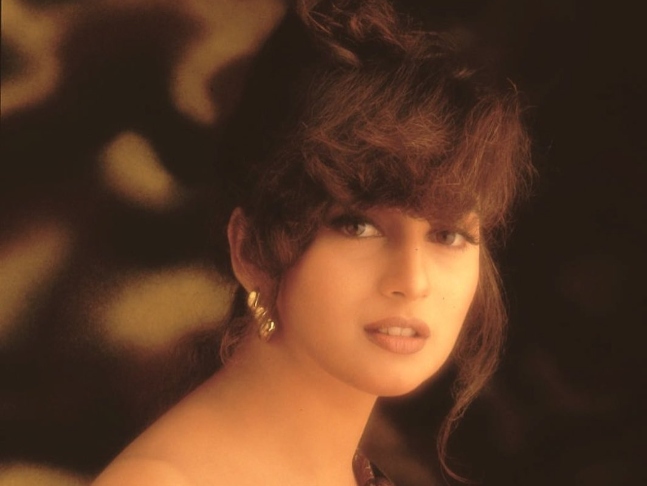 Right from the ’90s, Madhuri has been setting fashion trends that no one could outdo. Making her dense, voluminous curls and her fresh glow her signature style, Madhuri set the benchmark of beauty in her era. Over the years, this diva kept reinventing herself both, films and fashion-wise.

As our charismatic queen turns 53 today, here’s a sneak peek at her style evolution over the years… Be it late ‘80s or modern ‘20s one cannot stop himself from chanting ‘Mohini, Mohini’ whenever this diva appeared in a blingy off-shouldered blouse and multi-hued skirt singing 'Ek Do Teen'. This iconic look became so famous that years later it Jacqueline Fernandez sported its revamped version in its 2.0 version in Baaghi 2.0 Pastels, voluminous frills, structured shoulders, and her patent curls were flaunted quite prominently by this diva. 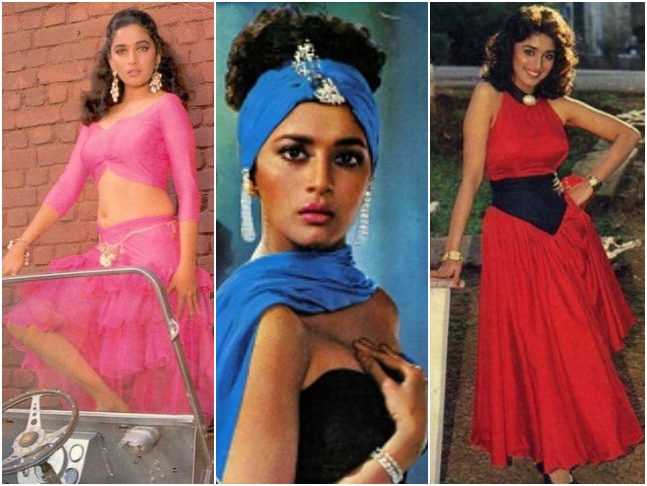 Dil saw Madhuri in quite an upscale avatar. Figure-skimming dresses, halter necks, and hot pink hues…ooh, la la! Her dresses were quite a hit just like this film. 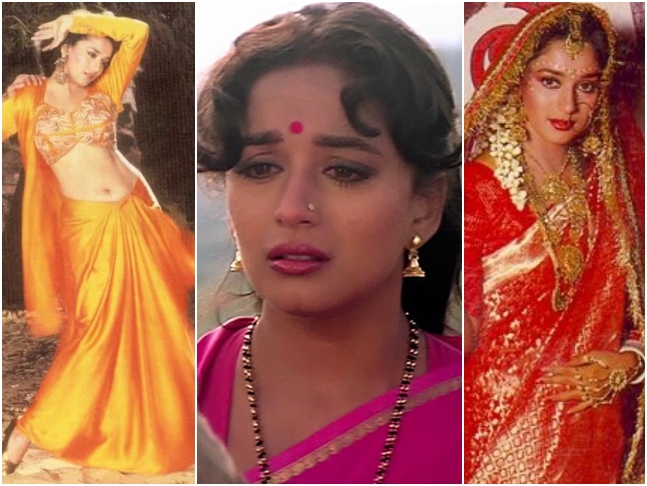 With Beta, Dixit scored another iconic look in her kitty. Her golden drape with embellished choli from the 'Dhak Dhak' still has a massive fan following! Other than that, this film saw Madhuri sporting some really dreamy saree and lehenga choli looks in the film. Center-parted fringes teamed with her luscious pleated mane was her go-to look. 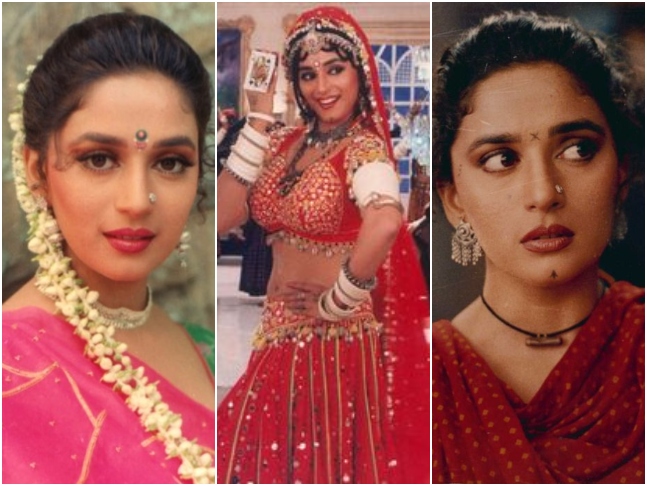 Madhuri really made cholis look sexy in Khalnayak. While her iconic song 'Choli Ke Peeche Kya Hai' saw her in full ethnic glory, some of her minimal looks in the films were a stand out as well. We also saw her sporting big bindis much to our delight. 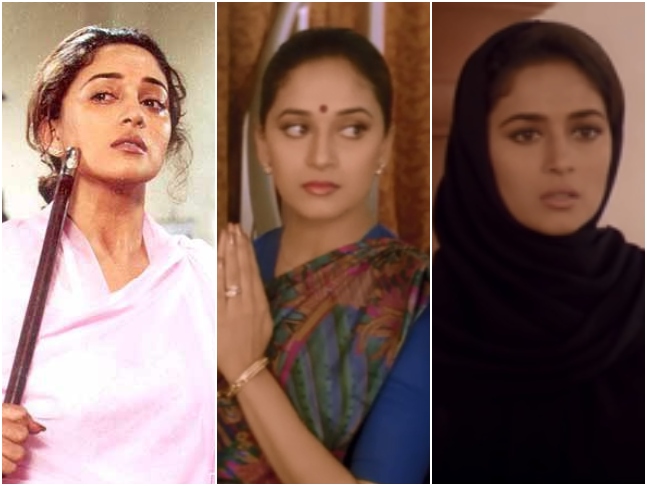 With Anjaam, Madhuri showed us the best of both worlds. Flaunting crips and neat looks in the first half, she rocked a complete de-glam look in the second one. 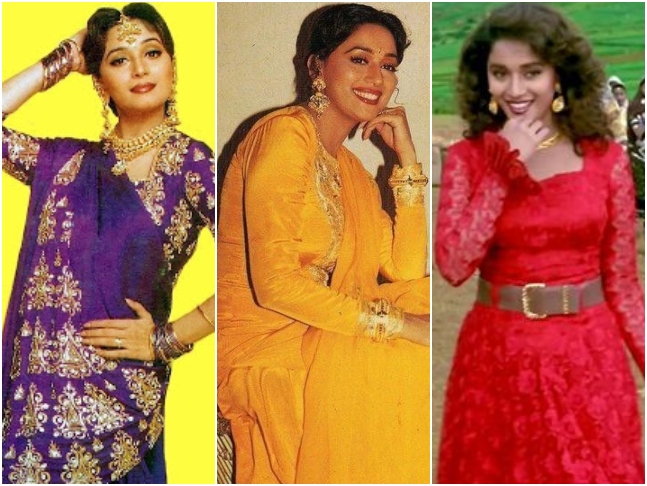 While Anjaam saw her in a de-glam avatar, this film saw Madhuri at her fashionable best *uhhu, uhhu*. Embracing her dense curls with bold lips, she put on a show in popping monotones, lacy dresses, and serene ethnics. 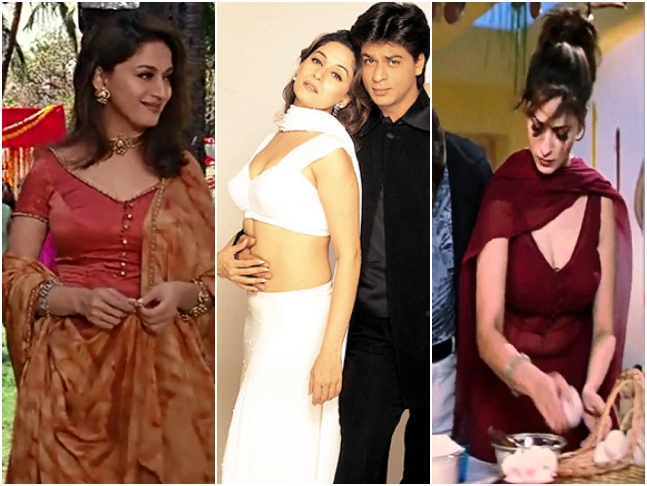 With this film, she styled her signature curls into easy waves. Thanks to Madhuri, monotone shararas and three-piece liner dresses were suddenly a huge hit. Not to forget those sexy athleisure looks… 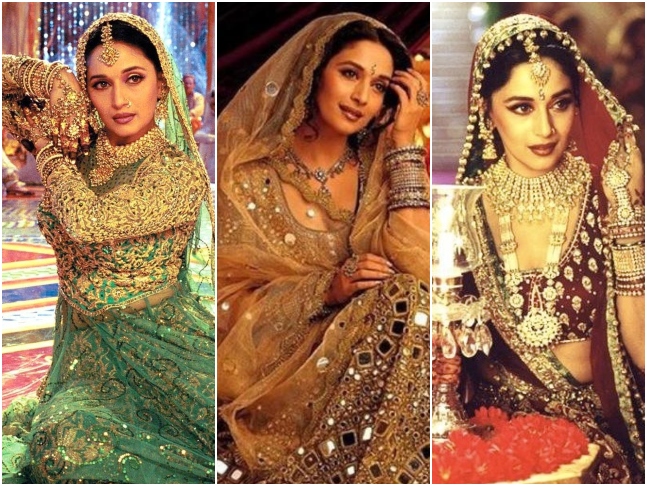 As 'Chandramukhi', Madhuri exuded the regal charm and paid aid an ode to courtesans looking breathtaking as ever. Intricate AJSK anarkalis, lavish lehengas, heavily encrusted jewels, everything looked mesmerizing on this beaut. 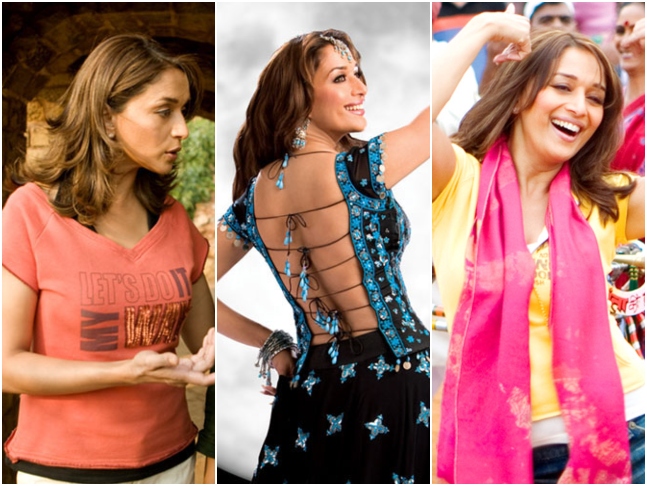 After a long sabbatical, Dixit picked up from where she left off with her comeback film Aaja Nachle. Playing her age, she stuck to sophisticated NRI looks throughout the film in denim, monotone t-shirts, and white shirts. Ditching her signature curls, we saw her sporting feathered tresses in this film. 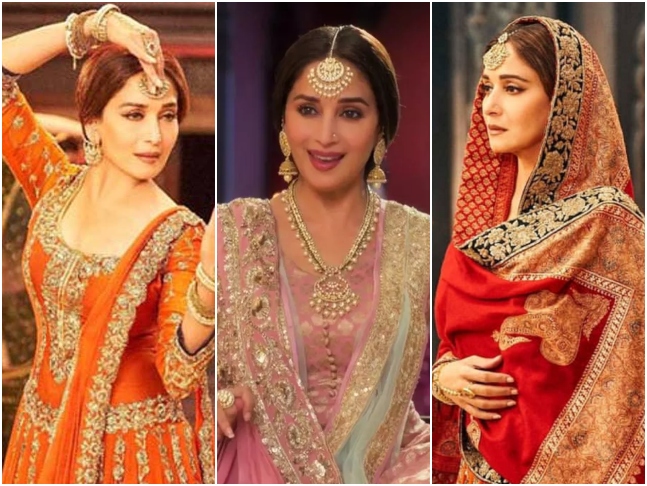 In her recent magnum opus Kalank, Madhuri brought a next-level regality to her courtesan look from Devdas. Bright hues, intricate Manish Malhotra ensembles, and statement chandbaalis and hath-phools, she justified the role of Bahaar Begum with utmost finesse.

Ditching the models for marionettes, Moschino 'puppets' his Spring 202