Filmmaker Anurag Basu is all set to enthrall the audience with yet-another slice-of-life relationship drama that arrives in theatres in February next year. The master storyteller has got an ensemble cast comprising Abhishek Bachchan, Rajkummar Rao, Aditya Roy Kapur, Sanya Malhotra, Fatima Sana Shaikh and Pankaj Tripathi for his dark comic anthology which centers on unavoidable jeopardize of life and has four different stories set in a quintessential Indian metro.

Now, Peepingmoon.com has learned that Rohit Saraf who is playing Farhan Akhtar and Priyanka Chopra's son in Shonali Bose's The Sky Is Pink has joined the cast of Anurag's next multi-starrer, tentatively titled as Ludo. He will be seen in a principal role in one of the stories, alongside a young actress whose identity has been kept under wraps. Rohit who was last seen as one of Rani Mukherji's students in Hichki and also featured as Alia Bhatt's brother in Dear Zindagi is believed to have already finished his portions of Basu's film during its Mumbai schedule in May.

An action-comedy with interesting stories at its core, Anurag Basu's next offering is said to be high on drama and emotions backed by Pritam's melodious composition. Although the character and roles of the actors haven't been revealed yet, the film, our sources say, will see them exploring something they haven't played before. The principal shooting has already been completed and only a patchwork is left after which the film will go into post-production. 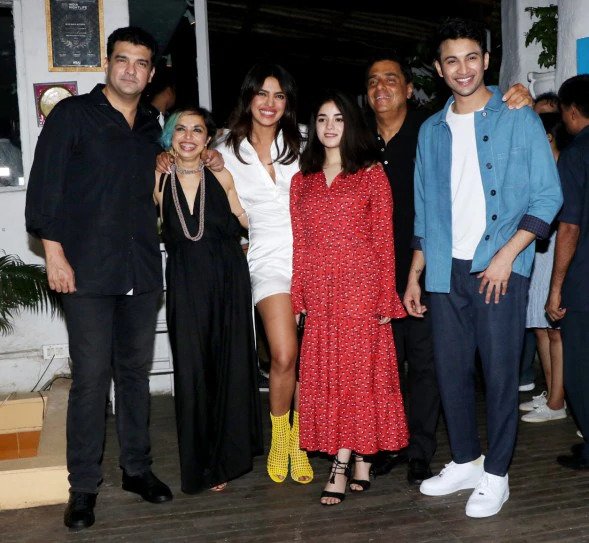 The Sky is Pink with Rohit Saraf (extreme Right)

It was speculated that this film could be the sequel to Basu's 2007 hit, Life In A... Metro, however, the rumour was soon put to the rest calling it an entirely different project. "The genre is different. 'Life...' had drama, love story and it revolved around multiple stories about relationships. This is not that. This film has a bit of crime and black humour in it. The only common thing is all four stories are intersecting and affecting each other. I don't want to confuse the audience and call it as a sequel to 'Life..'," Basu said recently.

Exclusive: Varun Dhawan to collaborate with Raaj Shaandilyaa for a com