Shilpa Shetty's husband and businessman Raj Kundra is under judicial custody in an alleged pornography case since July 19. The actress, who is gearing up to make a comeback with Hungama 2, which will release today, is sailing through a tough phase. Now, days after Raj's arrest, Shilpa shared her first Instagram stories. The actress shared a picture of a page from a book.

A quote by James Thurber read, "Do not look back in anger; or forward in fear but around in awareness." The quote added, "We look back in anger at the people who’ve hurt us, the frustrations we’ve felt, the bad luck we’ve endured. We look forward in fear at the possibility that we might lose our job, contract a disease, or suffer the death of a loved one. The place we need to be is right here, right now—not looking anxiously at what has been or what might be, but fully aware of what is. I take a deep breath, knowing that I’m lucky to be alive. I have survived challenges in the past and will survive challenges in the future. Nothing need distract me from living my life today." 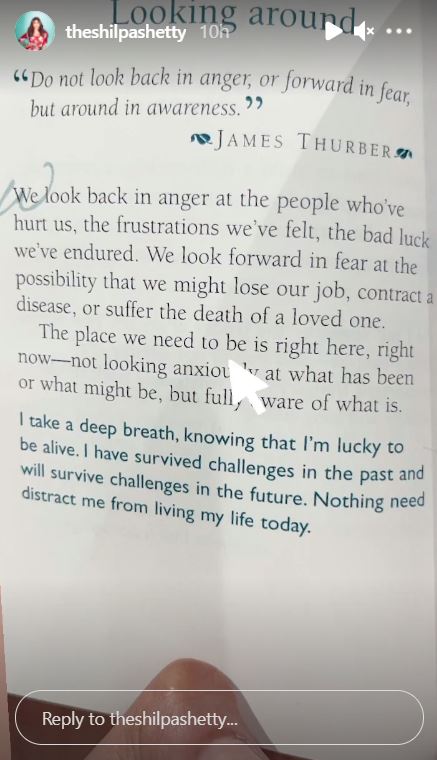 Recommended Read: Raj Kundra's arrest won't affect Hungama 2's release, it's sad that Shilpa Shetty's name is being dragged when she has nothing to do with it: Producer Ratan Jain

Reportedly, at least 11 people have been arrested by the Mumbai police in the case. Raj and the IT head of his company, Ryan Thorpe, are in judicial custody till July 23.

Speaking of Hungama 2, the producer of the film told that Raj's arrest won't affect its release. In an interview, he said, "Why should any of this interfere with the release of Hungama 2? It’s her husband, not Shilpa who has been booked. She is one of the artists in the film and has completed all her work including the promotions. Even the investigative agency said that they have not been able to any find any active role of Shilpa so I don’t see why it should hamper our film. It is sad that people are dragging her name when she has nothing to do with it."