Advertisement
HomeBOLLYWOODENTERTAINMENT NEWSDilip Kumar was a legend in his lifetime, and will remain a legend in the future too: Congress President Sonia Gandhi offers condolence to Saira Banu

Dilip Kumar was a legend in his lifetime, and will remain a legend in the future too: Congress President Sonia Gandhi offers condolence to Saira Banu

Bollywood's Tragedy King and legendary actor Dilip Kumar left for his heavenly abode on July 7. With his passing away, the Golden Era of Indian cinema came to an end. Born as Mohammad Yusuf Khan, Dilip Sahab was married to actress Saira Banu for 54 years. After the demise of Dilip Sahab, the president of the Indian National Congress, Sonia Gandhi, wrote a letter to Saira Banu and offered her condolence.

In the letter, Mrs Gandhi wrote, "With the passing away of your beloved husband Shri Dilip Kumar, the Golden Age of Indian Cinema has finally come to an end, Shri Dilip Kumar was a legend in his lifetime, and will remain a legend in the future too, as generations of film lovers will continue to watch him with admiration in films that his superb acting skills turned into evergreen classics." 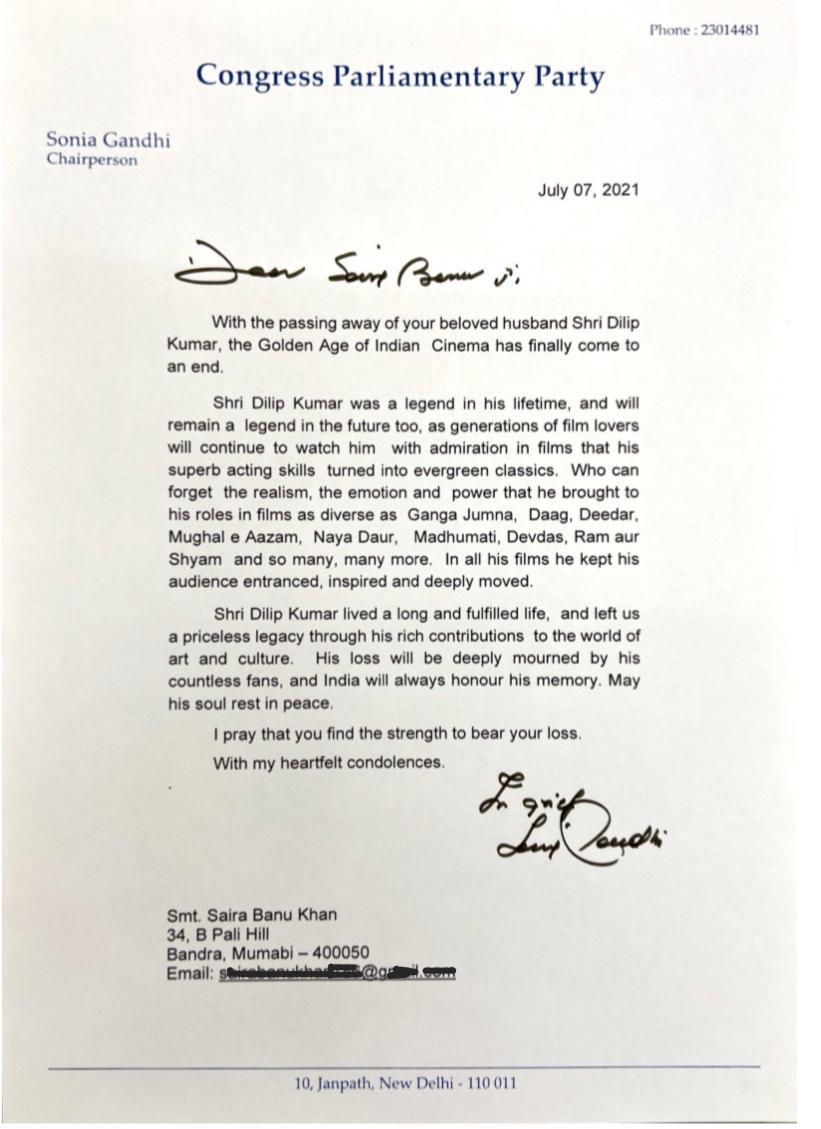 She further added, "Who can forget the realism, the emotion and power that he brought to his roles in films as diverse as Ganga Jumna, Daag, Deedar, Mughal e Aazam, Naya Daur, Madhumati, Devdas, Ram aur Shyam and so many, many more. In all his films he kept his audience entranced, inspired and deeply moved."

Mrs Gandhi said that Dilip Sahab has left behind a priceless legacy through his rich contributions to the world of art and culture. She stated that his loss will be mourned by his countless fans and India will always honour his memory. She concluded saying, "I pray that you find the strength to bear your loss. With my heartfelt condolences."