Actress Alia Bhatt, who recently started her own production house titled Eternal Sunshine Productions, kickstarted preparations for her upcoming film Darlings. The Raazi actress shared a picture of what looks like the script of the film on her Instagram story. Her companion for the script-reading session was a cup of black coffee.

"Prep," she wrote along with the picture. Darlings will mark Alia's debut as a producer. Besides producing the film, the 28-year-old actress will also be starring in it. The film will be co-produced by Shah Rukh Khan's production house Red Chillies Entertainment. The film will also star Shefali Shah, Roshan Mathew and Alia's Gully Boy co-star Vijay Varma. 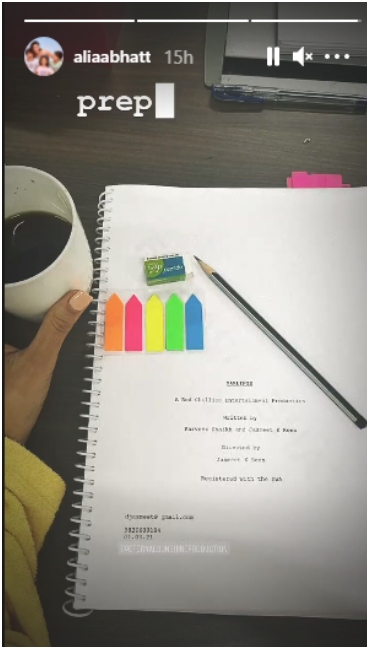 Recommended Read: Vijay Varma reveals that he bagged Darlings through Alia Bhatt, says ‘got introduced to the project through her’

Talking about the film, Alia had earlier said, "I am really excited to be part of Darlings; it's a powerful story with a lot of humour and doses of dark comedy. I am thrilled to have Darlings as my first film as a producer, that too in collaboration with my favourite, Shah Rukh Khan and Red Chillies."