South African cricketer AB de Villiers’ wife Danielle de Villiers has made the hearts of Anushka Sharma and Virat Kohli’s fans aflutter with her recent AMA session. Danielle took to her social media to share a stunning photo of Anushka along with her daughter Vamika.

Danielle recently hosted an AMA session (Ask Me Anything) on her Instagram profile. During the session a fan asked her if she hangs out with Anushka when the two countries are playing against each other. The fan asked her, “Do you and Anushka Sharma hang out?” 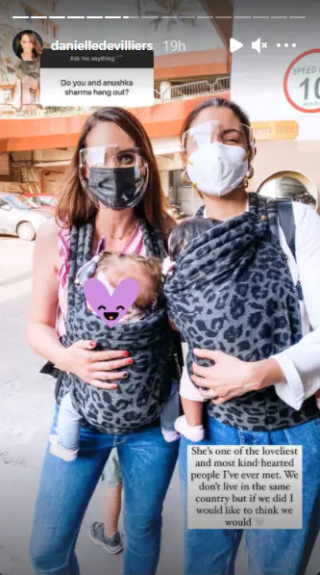 Sharing a picture with Anushka and Vamika, Danielle heaped praises on the actress and wrote, “She's one of the loveliest and most kind-hearted people I've ever met. We don't live in the same country but if we did I would like to think we would.”

In the picture both Danielle and Anushka can be seen cradling their children in baby carriers. Interestingly both the ladies have the same baby carrier.