Anushka Sharma and Virat Kohli welcomed their baby girl on Janaury 11. PeepingMoon.com sources first confirmed the actress delivered her daughter in Mumbai's Breach Candy hospital on January 11, 2021, at 3:49 pm and was named Anvi. However, the couple is yet to make an official announcement. Virat had announced the arrival of his little one as he posted a note on Instagram. With a heart emoticon, Virat wrote, "We are thrilled to share with you that we've been blessed with a baby girl this afternoon. We thank you all for your love, prayers, and good wishes. Anushka and the baby are both healthy and we are feeling beyond blessed to start this new chapter of our lives. We hope that you can respect our privacy at this time. Love, Virat."

Now, the Indian Cricket Team Captain has changed his bio on Twitter and called himself a 'proud father'. "A proud husband and father," wrote Virat on Twitter almost a week after the couple welcomed their daughter. 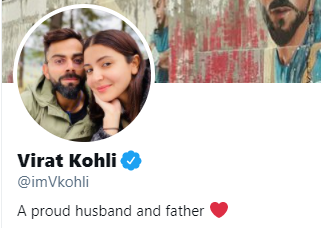 Recommended Read: Anushka Sharma-Virat Kohli send gift hampers to media on the birth of their daughter, request them to not carry content featuring her

The couple had announced Anushka's pregnancy back in August with an adorable post with the caption "And then, we were three! Arriving Jan 2021". After the arrival of their baby girl, Anushka and Virat sent customized hampers for the paparazzi fraternity, requesting them to not click their daughter as they wanted to keep her away from the public eye for now.

Earlier, talking about how the new parents would want to deal with social media when it comes to their first child, Anushka had said, “We’ve thought about it a lot. We definitely do not want to raise a child in the public eye — we don’t plan on engaging our child in social media. I think it’s a decision your child should be able to take. No kid should be made to be more special than the other. It’s hard enough for adults to deal with it. It’s going to be difficult, but we intend to follow through.”