Priya's Mask, the new animation film featuring voices of Bollywood actresses Vidya Balan and Mrunal Thakur along with Rosanna Arquette of Hollywood, is available for viewing online. The film sees an Indian female superhero spreading awareness about the Covid-19 pandemic. The film is based on the Indian female comicbook superhero Priya. The fourth edition of the comicbook series, titled Priya's Mask, has Priya as the central character dealing with the pandemic.

"We are simply over the moon to shout out from the rooftops that Sahas and mine latest adventure is finally here. Wohooooooo. PRIYA'S MASK is a nod to the courage and sacrifices of women healthcare workers the world over," read a post shared on Wednesday on the unverified account of Power of Priya.

Mrunal, too, took to Instagram Stories to announce the film has arrived. "There it is," she wrote along with a screengrab of the film that has her lending voice to Priya. 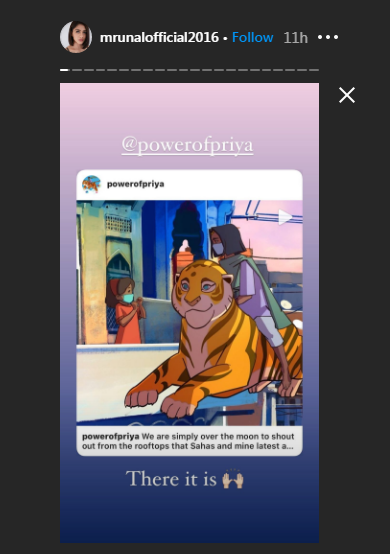 "I have always aspired to be that superwoman who spreads awareness around social issues and it couldn't be more exciting than to be a part of an animation character who is the voice of reason. I want to tell children of frontline workers that even though their parents aren't wearing capes, they are heroes in their own ways. They too are saving lives and taking care of the nation," said Mrunal. 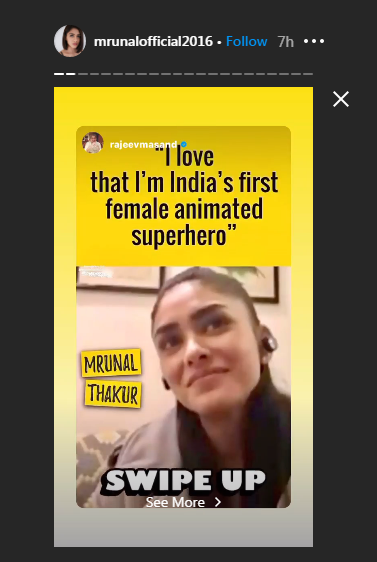 Her character is escorted by the flying tiger Sahas, voiced by Vidya. Set against the backdrop of Jodhpur, the story also features the eight-year-old Meena, voiced by Sairah Kabir, and her working mother who nurses Covid-19 infected patients.

The series was created by documentary filmmaker and technologist Ram Devineni. Priya's Mask is written by Shubhra Prakash, and has illustrations and animation by Syd Fini, Hamid Bahrami and Neda Kazemifar. The project was funded through a grant from the North India Office of US Embassy, New Delhi, in coordination with the Regional English Language Office, as part of US-India cooperation to combat the pandemic.

It also presents an alliance between two female comicbook superheroes from neighboring countries, with Priya collaborating with the Pakistani female superhero, Burka Avenger, in their fight against the deadly virus.