Shah Rukh Khan and Gauri Khan's firstborn Aryan Khan turned 23 today. The handsome lad is currently studying films in the US. On his birthday, his sister Suhana Khan showered love on him. Suhana, making her brother's day special, shared a wish on her Instagram stories. 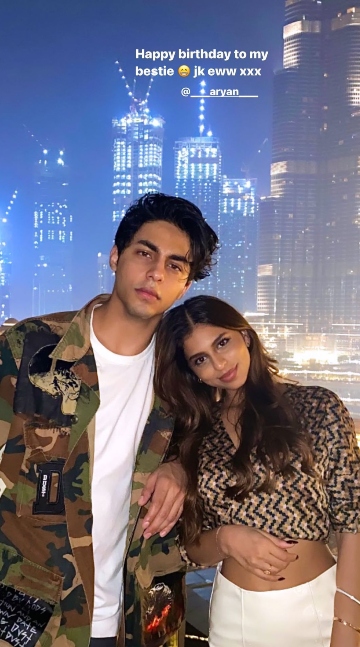 Rumours of Aryan's Bollywood debut is nothing new. During an interview previously, Shah Rukh spoke about Aryan's aspirations and told, "My son doesn’t want to act and I don’t think he can. But in India, it is like ‘if you are a movie star’s son, then you might become a movie star.’ He looks nice, he is tall but I don’t think he has what it takes perhaps and he realised it himself. But he is a good writer. I think wanting to become an actor has to come from within. I think I realised it from him when he said that. He came and said, ‘I don’t think I want to act’. And his issue was very practical and honest. He told, ‘Every time I’ll be compared to you. So if do well, it will not be because of the skills I got, it will be ‘Oh obviously, he is his son so he will do well'. If I don’t do well, it’ll always be, ‘My God, look at him what his father did and look at him, what is he doing’’. So he said ‘I don’t want to be in that position."