No Filter Neha 5: 'Don’t want to stop you from getting rozi-roti,' says Saif Ali Khan to paparazzi on son Taimur's 'star kid' status

Building their podcast properties further, South Asia’s largest music and audio streaming service JioSaavn is launching the fifth season of No Filter Neha. Co-created with Neha Dhupia’s ‘Big Girl Productions’, this #WorkFromHome edition of the chat show is aimed at bringing forth raw, uncensored stories from celebrities across fields. The show opened with an exciting episode with Saif Ali Khan on August 25, 2020.

When Saif was asked if he is a homebody, he said, "It’s become that. The excitement of having a young new entrant in our lives, I just wanted to try and get home before he goes to sleep. But I have become, at least in Bombay, a complete homebody" Recommended Read: Neha Dhupia returns with a work-from-home edition of 'No Filter Neha 5'; Saif Ali Khan to be her first guest

When asked if Imtiaz Ali offered him Rockstar, he said, "I was offered, Imtiaz wanted to make Rockstar but we made Love Aaj Kal instead. And then he made it with Ranbir. His first offer to me was this film called Rockstar"

Saif thinks wife Kareena Kapoor Khan is Mrs. Gram. He said, "Just because I’m not on social media doesn’t mean I don’t know what it is, for God’s sake. I actually was on it (Instagram) and I deleted it because I was finding it, again, I was getting irritated by toxic remarks and it’s taking too much of time and its making me frown and I don’t want to get annoyed so literally, Ignorance is bliss. It’s like why would you want to listen to all that. My wife, on the other hand, I think she’s Miss Instagram, Mrs. Gram." 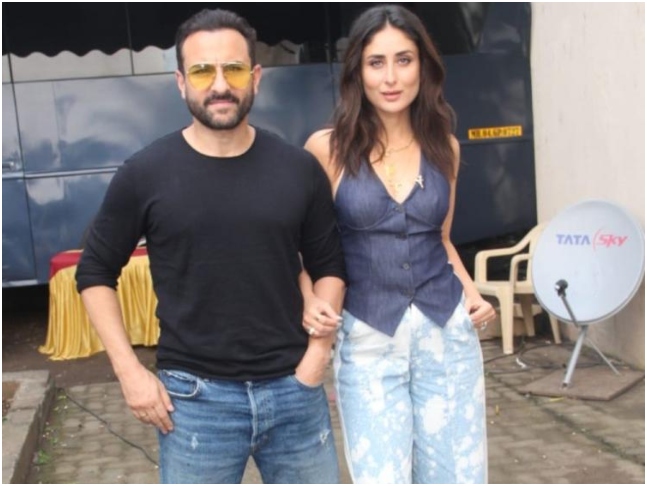 Saif also opens up about son Taimur Ali Khan and the paparazzi. He said, "Ya, I think he’s realised that there will be cameras in certain places. He has never enjoyed being photographed particularly, even by us at home. But he understands,I mean, he smiles and waves and he likes camera flashes but it’s just something he’s always seen so he doesn’t think about it. It’s funny, like this house that we live in, is really cluttered. It has things lying around, paintings and books and things and lot of people said you’ll have to clear this up, you know, lots of glasses on a low shelf. My mother and a few other people said, it’s all gotta move when the kid’s running around. And we didn’t get around to moving it ever and he’s just made his way around it, he’s never broken a thing. I’m just saying what you grow up with you just become used to. I mean, it makes me a little tense, he gets that vibe and then when they would chase him to school, you worry, I mean, there’s too much attention sometimes. It’s sad, you know, people don’t let you be like a normal kid in Bombay. This star kid is a tag that just falls on you, whether you like it or not and in fact, the answer is you don’t want it but what can you do. So, they are serving a purpose, someone says don’t stop them, they’re doing their job, they are also getting paid, you know it’s a lockdown situation so in India, there’s that complicated thing and an American would be like – hey, can you please not stalk my house. But here I’m like I understand you’re getting paid and I don’t want to stop you getting rozi-roti. So, it’s like that, you don’t know how to react. I think when you resist it, it becomes a situation, when you hide from them, or run around with your hat pulled low, but if you just give them that picture, just give a smile and just move on. So, the important thing is to tell Taimur – you must be polite and it’s no big deal and I think he’s learnt that"

Saif also reveals the name of his autobiography on No Filter Neha! "I think I’ll call my autobiography – I’ll be good from tomorrow. I have said that so often, it’s usually diet based or alcohol-based. And I’d have chapter heading also, like probably ‘shouldn’t have had the whiskey’"