Due to the COVID-19 pandemic, the entertainment industry was on a standstill as theatres were closed for a long period of time all over the world. But with several countries slowly opening up, UAE was next in line. The country removed its lockdown in May end and opened the theatres on May 27. The theatres attracted the audience towards it by re-releasing popular Hollywood and Bollywood films. Encouraged by the positive response to the re-release of Baaghi 3, several filmmakers are considering a second round of big-screen outing for their offerings.

On June 11, Akshay Kumar, Kareena Kapoor Khan, Diljit Dosanjh and Kiara Advani starrer Good Newwz, which was declared a super hit at the domestic box office on its release last year, will hit the screens again. Akshay hopes that the comedy will spread cheer amid the current crisis. "Dubai has always given so much love to my films. The re-release of Good Newwz is special, especially during such times. I hope it manages to entertain the audience once again," said Akshay. 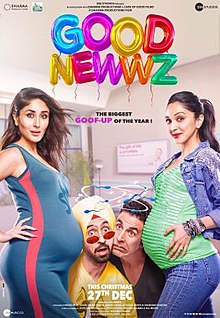 Not only Raj Mehta's, Good Newwz but Ayushmann Khurrana's and Nushrat Bharucha's 2019 comedy, Dream Girl, too is part of the line-up. Vibha Chopra, global syndication & international film distribution head, Zee Entertainment, said that they deliberately chose laugh riots. She explained, "The world has been going through a tough time. The re-release of Good Newwz and Dream Girl is an opportunity for the audiences to take a break from the chaotic scenario and experience the joy of watching films on the big screen, keeping health and safety at the forefront."