The war against Deepika Padukone's Chhapaak is far from over. After taking pledges of boycott and extending support to its competition, several people appear to have attacked Chhapaak’s IMDb rating as well.

The film’s page on the popular review aggregator website is getting ‘review bombed’ from multiple accounts. Out of 6,900 total votes recorded so far, 4,000 went to the lowest ‘1’ rating. This has taken the film’s IMDb rating down to 4.4 stars. On comparison, Ajay Devgn’s Tanhaji: The Unsung Warrior’s rating has been recorded as 8.8 stars with 5,800 votes recorded over the weekend. As many as 4,300 fans gave the film ‘10’ star ratings on the website. Both the film released on January 10, 2020. 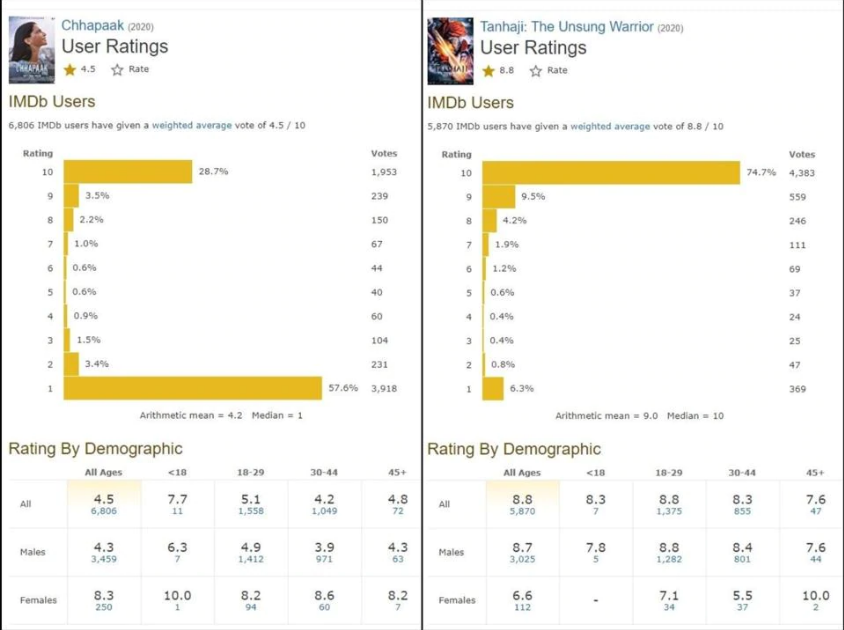 Recommended Read: 'We have to be able to separate between the personal and professional,' says 'Chhapaak' director Meghna Gulzar on Deepika Padukone's JNU visit

After Deepika extended her support to the JNU students by visiting the campus last week she started receiving flak and appreciation in equal from all quarters. Hence many Twitteratis are suspecting if the Chhapaak’s ratings are not low only because of unhappy cinephiles but there is something more to it. Netizens think that this foul play is by several "#Bhakts" who are giving low votes to Deepika's film without even watching it.

One of the users wrote, "Bhakts at it again. #Chhapaak is 4.3 on IMDB. Compare this to Tanhaji which is 9.0 currently. What else can you expect from such lowlifes?" Another said, "Quick quiz: What percentage of people have rated #Chhapaak on IMDB without watching it?"

Bhakts at it again. #Chhapaak is 4.3 on IMDB. Compare this to Tanhaji which is 9.0 currently. What else can you expect from such lowlifes? pic.twitter.com/A85p2ByccA

Quick quiz: What percentage of people have rated #Chhapaak on IMDB without watching it? pic.twitter.com/9YvartwMj5

On Rotten Tomatoes, which does not allow IMDb style review bombing, the picture is much different. Chhappak has recorded 83% audience score with 35 votes while Tanhaji has recorded a 90% score with 150 votes.

It's every citizen's responsibility to take care of our precious plane

Filmmakers in our country are literally de-valued, this industry is of