Stuntman Mansoor Khan first met Bollywood actor Hrithik Roshan in 2012. Now after eight years, Mansoor easily aces the actor's physical stature, film after film, regardless of the transformation each one requires. "Hrithik sir too says that my body is suited [to be a stunt double for him], but adds that I should ensure I do not acquire a paunch," Mansoor told a leading daily.

When asked how he preps to pull off the sequences in cinema that are attached to Hrithik's name, Mansoor added, "I run a lot, train in gymnastics and martial arts, and may also add in a session of gym training, in the evening. Lifting weights can affect stuntmen in that their flexibility can be compromised. So I must work on that as well. Also, there's something that we refer to as filmy fight, which is distinctly different from judo and karate, which are defence mechanisms. There is a specific training required to pull off fights where a stuntman is not meant to touch a co-artiste when throwing in a kick or punch, but must still look like they've beaten them with an impact. There's a lot of time invested in that too." 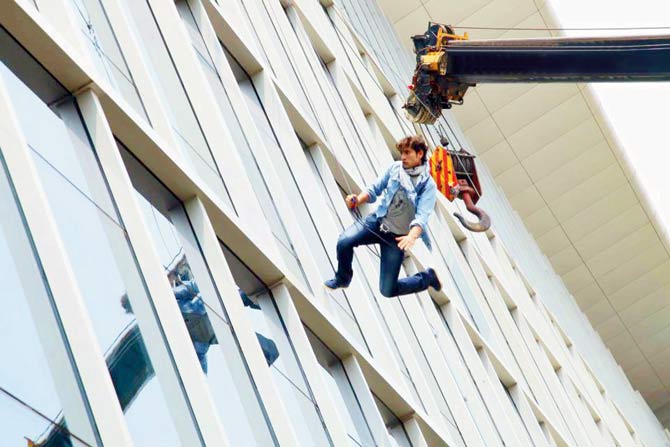 Meanwhile, another stuntman Javed Gauri, who rose to fame as the finalist of stunt-based reality show MTV Stuntmania, a decade ago, has done body doubles for Salman Khan Aamir Khan, Tiger Shroff, Prabhas, Sidharth Malhotra, Vidyut Jammwal and others. When asked how he transforms his body to suit the actors, he said, "We are usually given a 30-day intimation if we're appointed for a film, and must acquire the physique of the actor within that period. It's easy to bring about a basic transformation within 20 days, if one is dedicated. When I had to double for Salman for Bharat, I had to gain weight, and indulged in a high-fat diet. But when working for a film featuring a young actor like Sidharth for Marjaavaan, I had to increase my running and training component to shed weight, and also watch my diet."

Javed signed off by saying that he makes sure to keep his body light and agile to pull off stunts on the bike.