Janhvi Kapoor, soon after making a spectacular debut in Bollywood with Karan Johar's Dhadak, co-starring Ishaan Khatter in 2018, has been keeping extremely busy with back-to-back films. With interesting projects in her kitty, the 22-year-old actress is navigating across the country for shoot purposes. And owing to this, Janhvi couldn't make up to the NYC to celebrate her father Boney Kapoor and younger sister Khushi Kapoor's birthday, that fall in the first half of November. The actress' producer father Boney, in order to be with his younger daughter Khushi, who is currently in the Big Apple for further studies, jetted off before her birthday on November 5, while Janhvi had to stay back for her upcoming film Dostana 2's shoot.

Recently pictures from Boney's and Khushi's outing on the streets of NYC went viral on social media platforms. In those images, we can see Khushi flashing a content smile with her father by her side. Planting a kiss on Boney's cheek, the 19-year-old can't stop smiling. Upon coming across these sweet pictures of her father and sister, Janhvi, who is undoubtedly missing out on some family moments, shared one of the several images on her Instagram stories and said she is missing them. 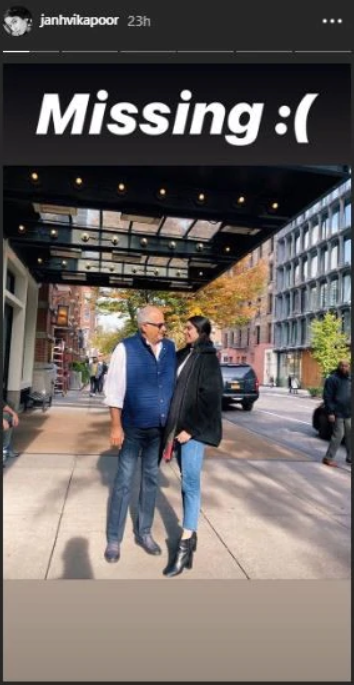 Speaking of Janhvi, she is currently shooting with Kartik Aaryan and Lakshya in Chandigarh for Collin D'Cunha's directorial debut Dostana 2. Apart from this, she will be seen in Gunjan Saxena: The Kargil Girl, RoohiAfza and Takht.