The wildfires in Brazil’s Amazon rainforest have hit a record figure this year and become an international crisis with world leaders and several celebrities coming out to talk about it and express their concern over the alarming situation. The Amazon rainforest is a vital carbon store that slows down the pace of global warming and is home to about three million species of plants and animals and one million indigenous people. Brazil’s space research centre INPE has detected 72,843 fires till now. This number shows an 83% increase than 2018. INPE claimed that since Thursday, satellite images have spotted 9,507 new forest fires in the country, majorly in the Amazon basin.

In the wake of the fires #PrayforAmazonas hashtag has been trending worldwide and now several of our Bollywood celebrities including Alia Bhatt, Ayushmann Khurrana, Arjun Kapoor, Dia Mirza, Disha Patani, Anushka Sharma, Malaika Arora, Hrithik Roshan and others have also raised their concerns over the forest fires. Check out their social media posts below.

The 'lungs of our planet' are burning! The #AmazonRainforest is home to about 3 Mn species of plants & animals and 1 Mn indigenous people. It plays an important role in keeping the planet's carbon dioxide levels in check. We won't exist without it! #SaveTheAmazon #PrayforAmazonas https://t.co/9rKfTYXolL

RECOMMENDED READ: Anushka Sharma and Virat Kohli look adorable as they soak in some sun on their beach holiday

It’s scary how bad the fire at the Amazon Rainforest is!! I can’t even begin to imagine the impact this will have on the world environment. It is truly saddening. #PrayforAmazonas

The Lungs of our planet Earth have been burning for weeks! #PrayforAmazonia https://t.co/eiduqZt257

The Amazon rainforest is burning at a record rate and for a frighteningly long time, marking a devastating hit on the world's efforts to combat climate change. (1/2)

Let’s take a moment to remember that our environment is important and that it affects you and me directly or indirectly. Let us do our bit to protect the environment for ourselves and our future generations.(2/2) 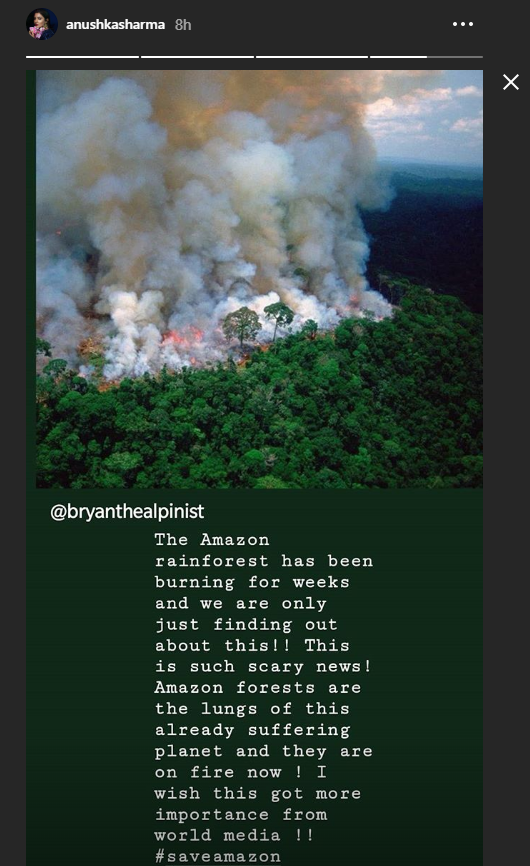 Terrifying to think that the Amazon is the largest rain forest on the planet, creating 20% of the earth’s oxygen, basically the lungs of the world, has been on fire and burning for the last 16 days running, with literally NO media coverage whatsoever! Why?

Deniers of #ClimateChange we are being gutted by the fires caused by your denial! The Amazon forest, the lungs of our planet has been on fire for the last 16 days and more than 72000 fires have occurred already this year. When will world media give this more attention? #ClimateChangeIsReal #ActOnClimate #amazonia #amazonas #PrayForAmazonia @unenvironment @unitednations @unsdgadvocates

Many world leaders are blaming Brazil’s President Jair Bolsonaro's policies for the fires. However, he has accused them of meddling in Brazil’s internal matters for political gain and suggested that non-governmental organizations (NGOs) started the fires.