Massive flood has hit the eastern part of our county and several people have been reported to have lost their lives. Almost 45 lakh people are displaced in Assam. Raising awareness about the distressed situations of the flora, fauna and people alike, Bollywood superstar Akshay Kumar donated Rs 1 crore each to CM Relief Fund and Kaziranga National Park. Akshay shared the information of his donation and even appealed everyone to contribute by tweeting, "Absolutely heartbreaking to know about the devastation by floods in Assam. All affected, humans or animals,deserve support in this hour of crisis.I’d like to donate 1cr each to the CM Relief Fund & for Kaziranga Park rescue." 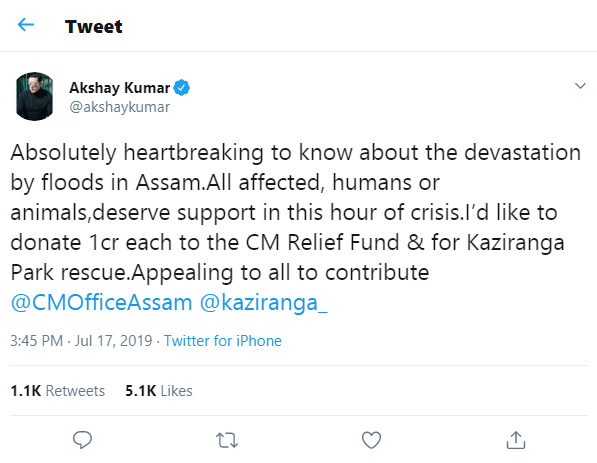 Talking about it, Akshay said in an interview that God has given him enough money, so he gives away without thinking twice. Recalling images coming from the flood-hit areas of Assam, Akshay pointed out, “One of the images that really affected me was of a mother holding her baby on her shoulders and wading through the flood waters. There was no expression of sadness or stress on her face. And that’s a dangerous sign. What all she must have gone through that she forgot all her sorrows. When I come across such photos, I am like, ‘it can happen to my wife or my daughter.’ Aisi photos bahut choobhtin hai. That’s why I did what I did."

RECOMMENDED READ: ‘Don’t just tweet about your feelings, do something about it’, says Akshay Kumar motivating others to contribute towards the Assam floods

Not just that, the animals plight in the Kaziranga National Park moved him too. "I also saw some images of animals like rhinoceros, who were drowning, dying and screaming. We should all come together during such times regardless of whether you can donate Rs 2 or 5 lakhs. That’s how a country is made. And humanity is all about that. I admit that God has given me a lot of money, so I give away without thinking twice. Kahaan leke jaane hai paise," added Akshay. While Akshay was praised by all quarters after his generous donation, the actor signed off by saying that "India is a large-hearted nation. We just need a little push."

On the work front, Akshay has Housefull 4, Good News, Sooryavanshi, Laxmmi Bomb and Bachchan Pandey, in the pipeline.