It's legendary actress Sridevi's 56th birth anniversary today (August 13) and as expected, wishes have been pouring in from all over the world. Sridevi passed away last year on February 24, 2018, in Dubai due to accidental drowning and her sudden death left a void in the hearts and mind of everyone, especially her husband Boney Kapoor and daughters, Janhvi Kapoor and Khushi Kapoor.

Today, on her birth anniversary, Janhvi remembered her mom Sridevi in the most simple and sweetest way. Sharing a beautiful photo of Sridevi clicked during English Vinglish days, Janhvi wrote, "Happy birthday Mumma, I love you" Check it out here:

Happy birthday Mumma, I love you

As soon as she posted the picture, several celebrities including Priyanka Chopra Jonas, Manish Malhotra, Rhea Kapoor to Dia Mirza and Masaba Gupta, showered love on her post. 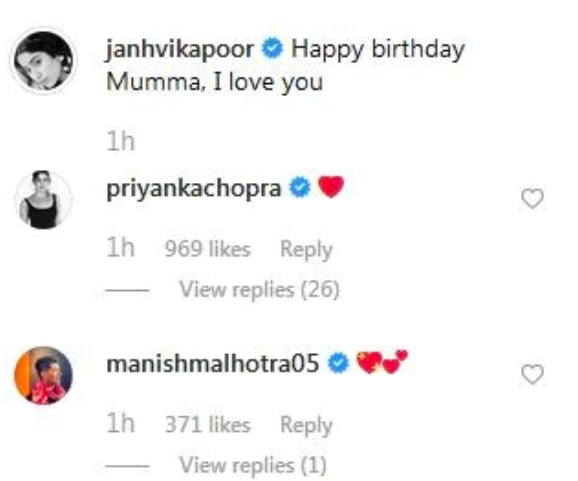 It's been a year and a half since Sridevi left for heavenly abode. Talking about her mother's untimely demise, Janhvi had earlier said in an interview, "I think, I was still in that state of shock, to be very honest. I think I am still in shock. None of it has been processed. Like, I have no memory of three or four months."

On the work front, Janhvi will next be seen in Kargil Girl, RoohiAfza and Takht.