Sushma Swaraj passes away at 67: Anushka Sharma, Parineeti Chopra, Ayushmann Khurrana and others mourn her demise

Former External Affairs Minister and a BJP stalwart Sushma Swaraj passed away at the age of 67 in Delhi’s All India Institute of Medical Sciences (AIIMS) on Tuesday, August 6. She reportedly suffered a massive cardiac arrest and was admitted in the late evening. She had a kidney transplant in 2016 and had opted out of contesting Lok Sabha Elections earlier this year citing health reasons. She had also taken a backseat from active politics due to ill health.

A glorious chapter in Indian politics comes to an end. India grieves the demise of a remarkable leader who devoted her life to public service and bettering lives of the poor. Sushma Swaraj Ji was one of her kind, who was a source of inspiration for crores of people.

Sushma Ji was a prolific orator and outstanding Parliamentarian. She was admired and revered across party lines.

She was uncompromising when it came to matters of ideology and interests of the BJP, whose growth she immensely contributed to.

I can’t forget the manner in which Sushma Ji worked tirelessly as EAM in the last 5 years. Even when her health was not good, she would do everything possible to do justice to her work and remain up to date with matters of her Ministry. The spirit and commitment was unparalleled.

Sushma Ji’s demise is a personal loss. She will be remembered fondly for everything that she’s done for India. My thoughts are with her family, supporters and admirers in this very unfortunate hour. Om Shanti.

I hail from Ambala Cantt, same as Sushma Swaraj ji. Always felt proud that a woman from our small town made it big, and made a difference. Sushma ji rest in peace. You inspired me on a personal level. #RIPSushmaSwarajJi

Deeply saddened that Sushma Swaraj has passed away.Inspite of political differences we had an extremely cordial relationship. I was 1 of her Navratans as she called us during her I and B ministership and she gave industry status to film. Articulate sharp and accessible. RIP

Deeply saddened by Sushma ji’s demise.The Music Fraternity will be indebted to her for magnificent defence of their rights in the Lok Sabha . You were an exceptional person Sushmaji. We will always remain thankful to you.

Deeply shocked and saddened to hear about Sushma Swaraj ji’s sudden demise.
A graceful and honest leader, a sensitive and selfless soul, a keen understanding of music and poetry and a dear friend. Our former external minister will be remembered fondly.

Absolutely shocked to hear about #SushmaSwaraj ji... we lost one of the finest leader of our nation ! #RIPSushmaJi

India has lost its extraordinary leader, minister and personality.. May God bless her soul #SushmaSwaraj

Saddened to hear about the sudden demise of Sushma Swaraj ji . May her soul rest in peace

#SushmaSwaraj ji, may your soul rest in peace.

In my younger years I got so much support from Shushma ji ! I still have pictures with her giving me my first award all over my office!gutted sad at d loss of a lady who taught me my first lesson... women should help women grow ! Thanku n rip shushmaji #RIPSushmaSwarajJi https://t.co/tyAHCa3vYf

A force of nature she was. Too young to go. Saddened to hear this untimely news. A nation’s loss. #SushmaSwaraj #RIPSushmaSwaraj

Extremely sad to hear of the demise of #sushmaswaraj ji. An absolute powerhouse yet seemed so warm & humble! Poised & dignified, she was a leader I admired. Thank you for all your years of service to this nation. Rest in Peace #RIPSushmaJi pic.twitter.com/cqTVfGliTP

Interestingly, only three hours before the news of her demise broke she had tweeted thanking Prime Minister Narendra Modi for the scrapping of Article 370 in Jammu and Kashmir. She had also congratulated Home Minister Amit Shah on the decisive action on Jammu and Kashmir and Ladakh. She had written, “Thank you Prime Minister. Thank you very much. I was waiting to see this day in my lifetime”, in her last tweet. 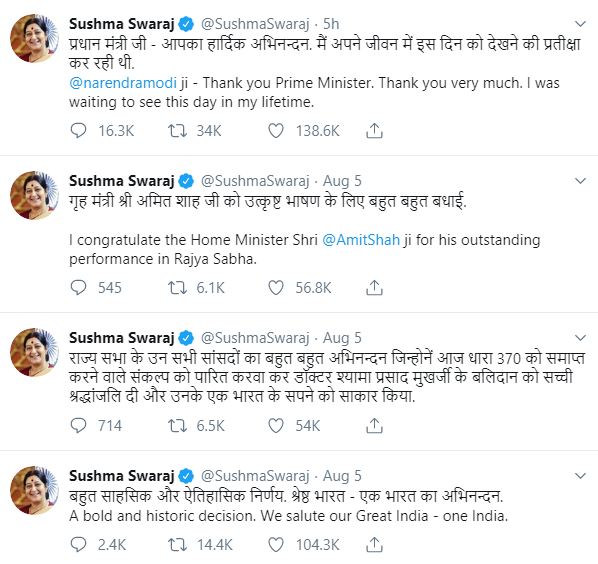 RIP Sushma Swaraj, your exemplary character was a beacon of hope for countless of Indians!