Advertisement
HomeBOLLYWOODENTERTAINMENT NEWSAce fashion designer Tarun Tahiliani comes out in support of Priyanka Chopra, shuts down trolls targeting her for wearing a saree without a blouse

Ace fashion designer Tarun Tahiliani comes out in support of Priyanka Chopra, shuts down trolls targeting her for wearing a saree without a blouse

Priyanka Chopra is a fashion icon and a diva in her own right, period. There is no denying the fact that she can carry Indian as well as western wear with aplomb and has an eye for fashion. Many years ago she stole everyone’s hearts with her desi girl look in Dostana and now she is proudly carrying the label and become the first model-actress to appear in a saree on the cover of an international magazine. The July issue of American fashion magazine InStyle features PeeCee in a backless sequined saree designed by ace fashion designer Tarun Tahiliani.

She took to Instagram to post the photos of her cover shoot and although she is looking sultry, classy and hot, there were several netizens who trolled her for not wearing a blouse with her saree and showing off her back. People criticized her look and accused her of misrepresenting the Indian culture. Check out a few comments from the netizens below: 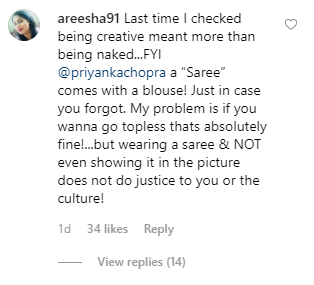 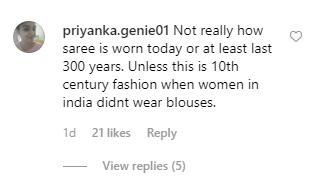 RECOMMENDED READ: Priyanka Chopra and Nick Jonas to launch a dance reality show ‘A Week To Sangeet’ taking inspiration from their own sangeet ceremony

However, Tahiliani came out in full support of Priyanka and told a leading daily, “There's nothing vulgar about it. In fact, not using a choli makes it a global statement. The transition from alluring Indian beauty to this modern goddess for a mainstream fashion cover only speaks of her (Priyanka) versatility. She is truly a modern Indian icon." He also defended her choice on social media and wrote a heartening post. Check it out below:

“Only Priyanka Chopra could bring her insouciance that she carries and take the alluring sultry persona from Bajirao Mastani across oceans and lands with the same surefooted agility on the cover of INSTYLE. Taking the saree global, proud of her identity and the versitality of the saree - a metaphor for her own versitality. The face of India globally.” — The India Modern Icon. @priyankachopra wears a fluid, hand-embroided couture saree in sequins, gota and tiny Swarovski crystals for the June 2019 cover of @instylemagazine. Photography: @robbiefimmano Styling: @juliavonboehm Makeup: @yumi_mori Hair: @harryjoshhair Nails: @pattieyankee #TarunTahiliani #PriyankaChopra #InStyle #InStyleMagazine #TTCouture #Couture #IndiaModern

He also told an entertainment magazine, “Priyanka is great in India, and is slowly making Indian fashion accessible in the US. This is what makes her a great ambassador of our culture. They selected pieces from various collections for the photoshoot. The sari is a couture piece, while the embroidered monochrome cape and the Eygypt-inspired lehenga are from our spring/summer collection. The pieces were then styled in a cool, modern way. She took classics and gave them an edge, which is very 'Priyanka'."

Speaking about donning a saree on the cover of an international magazine, Priyanka had written in Instagram, “Fashion is such an important part of global culture, often arising from centuries of tradition, and doesn’t go out of style when the seasons change. The ‘Saree’ is one of the most iconic and recognized silhouettes from India. To me, its beauty lies in its versatility, not just in drape and fabric. It embodies elegance, femininity, and power, and I love how I feel when I’m wearing one."