The Bharat Janata Party, led by Prime Minister Narendra Modi, registered a historic win in the recently concluded Lok Sabha Elections 2019. Yesterday, after his victory, filmmaker Anurag Kashyap congratulated him but also expressed concern over his daughter Aaliyah getting rape threats. Calling himself as a 'dissenter', he asked the PM how to deal with his followers, who are celebrating BJP's victory by threatening his daughter.

Sharing the image of a comment of a person on his daughter's picture, Anurag wrote, "Dear @narendramodi sir. Congratulations on your victory and thank you for the message of inclusiveness. Sir please also tell us how do we deal with these followers of yours who celebrate your victory by threatening my daughter with messages like this for me being your dissenter." 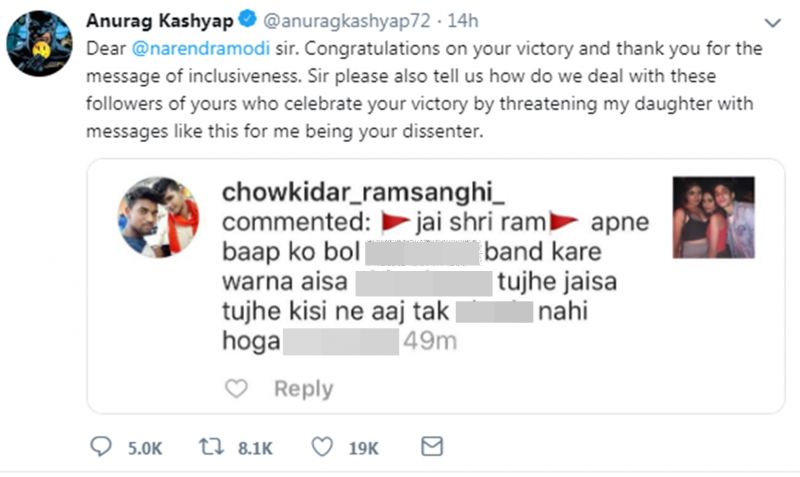 It is quite clear in the tweet that the Modi-Bhakt has threatened to violate her modesty, although the regressive words have been blurred in the picture.

However, soon after his tweet, Ashoke Pandit reacted by posting, "This twitter handle seems to be photoshopped because it doesn’t exist. Seems to be created by an #UrbanNaxal to give an opportunity to somebody to abuse #Modi when the entire World is happy."

This twitter handle seems to be photoshopped because it doesn’t exist. Seems to be created by an #UrbanNaxal to give an opportunity to somebody to abuse #Modi when the entire World is happy. https://t.co/e0kVlEhL4J

He further commented, "If it’s true dn I am of d opinion,that ds act shud not be just condemned bt tackled."

If it’s true dn I am of d opinion,that ds act shud not be just condemned bt tackled. Similar thing hd hppnd with my dgthr, I md a police complaint regarding d miscreant and didn't helplessly crib to d PM bcoz for me, my daughter's dignity and safety meant more dn my politics.

Search for it on Instagram not on twitter you moron .. this is my daughter getting a threat asshole ..

Later, Ashoke not only lashed out at him but claimed that Anurag was "sending him drunken texts" and that he was "in shock after the election results".

Mind your language Mr. Kashyap. Read my very next tweet on the thread - https://t.co/Okac8DS4gx

Let’s file a complaint with the police and get him arrested than asking the PM what to do. I am sure you know that law enforcing agencies exist in this country of ours. https://t.co/RoexaCGPcY