Atif Aslam is the king of romantic numbers and whenever he croons a song we definitely go weak in our knees. The soulful singer's next single Baarishein, produced by T-Series’ Bhushan Kumar beautifully captures the pain and turmoil of those who have fallen apart with pathos.

The song composed and written by Arko has Atif rendering the anguish of a relationship that is no longer in the happy space that it once was. The video features Sonu Ke Titu Ki Sweety actor Nushrat Bharucha alongside Atif. Atif and Nushrat recreate the happier times of their union and how eventually it slides away into a relationship gone wrong.
The video has been shot in Los Angeles by director David Zenie. 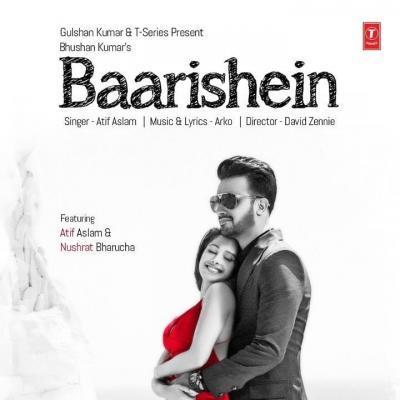 Sharing her experience Nushrat said, “I get nostalgic thinking about the rainy season. It triggers my memories of childhood, about my friendships and growing up years. So to be part of the song with such a concept worked really well for me. I kept connecting to the song and it made me nostalgic.”

Nushrat recalled another ‘chilling’ but funny experience, “After the rain sequence of the song was shot in the freezing LA weather at 2.30 am, the owner of the house refused to let Atif and me in. He told us to dry ourselves outside and then come in. I guess he did not want to spoil his palatial mansion with Italian marble and such stuff. Atif and I went mental on hearing that we would not be let in when we were completely drenched and it was freezing outside.”

“Pushing my limits was certainly an experience because shooting while you are on a US tour is not easy at all. Imagine performing almost five gigs a week coz weekends were packed and that too in different cities. Having said that, it was a lot of fun shooting in LA, doing last minute suit alterations and what not,” Atif added.