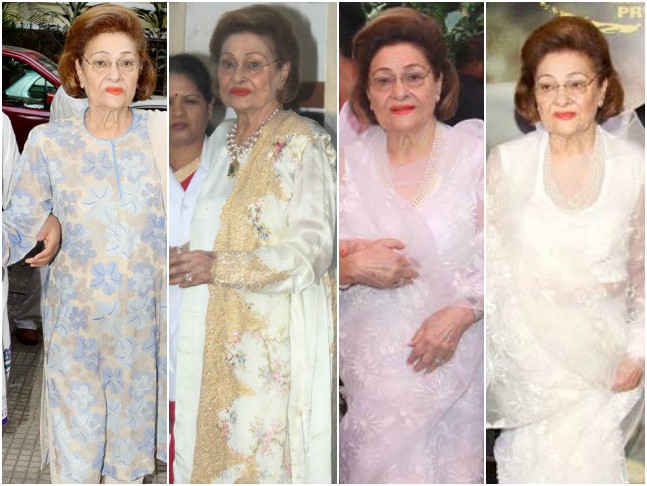 The elegant and much respected Krishna Raj Kapoor passed away this morning of a cardiac arrest, and also old age, as her elder son Randhir Kapoor heartbrokenly told the media. She was 87. And probably saddened by the fact that her second son, the actor Rishi Kapoor, had just left for the US to take care of a worrisome health issue of his own that had unexpectedly cropped up. The film industry is worried about Rishi. Its thoughts and prayers are with the actor who made a brilliant comeback to Bollywood this year with 102 Not Out and Mulk. But that perhaps was not enough. And in the quiet hours of the morning, like a doting and concerned mother, Krishna slipped away quietly. Like she was going to be with her ailing and lonely son.

Tragically, Rishi whose treatment has begun in New York, will not be here this evening when the mortal remains of Krishnaji are consigned to the flames at the Chembur crematorium that’s a short distance away from the landmark R. K. Studios that Raj Kapoor built. Nor will his sister Ritu Nanda who is similarly afflicted and in Delhi. But their mother’s spirit will give them strength. The other Kapoors will not be alone, all of Bollywood that dearly loved and respected this grand lady will be there like she was everybody’s mother.
Krishnaji was, without doubt, not just the matriarch of the Kapoor khandaan, but also the First Lady of Hindi Cinema. Her husband, the legendary Raj Kapoor, was known as the Greatest Showman of the Hindi screen. And her brothers, Rajendra Nath, Prem Nath and Narendra Nath, were all actors; her sister Uma married the actor Prem Chopra. But Krishnaji herself stayed away from the limelight and glamour. The families were already related when Raj Kapoor and she got married in May 1946. A cinema magazine, Filmindia, insensitively reported the wedding by writing, “Raj Kapoor, the talented and versatile son of Prithviraj Kapoor, ended his career of wild oats by marrying Miss Krishna Malhotra.”

There was some truth in this because Rishi, in his memoir Khullam Khulla: Rishi Kapoor Uncensored, made mention of his father’s colourful past. But those were different times. And unmindful of the scandalous rumours that followed her husband home, Krishnaji helped stabilize Raj Kapoor’s life and career, she gave him three sons (Randhir, Rishi and Rajiv) and two daughters (Ritu and Rima), she acted as a confidant and mother to Raj’s younger brothers Shammi and Shashi Kapoor, and became a rock of comfort to her grandchildren. Ranbir Kapoor, when he split with Katrina Kaif and moved out of the pad they shared, reportedly chose to stay with his grandmother while he picked his life up again. They all will miss her dearly. Last year, after Shashi Kapoor passed away, his son Kunal hosted the traditional Christmas brunch at home that brought the Kapoors together. Krishna Raj Kapoor presided over the ceremonies. This year, who is going to do it? RIP, Krishna Aunty…