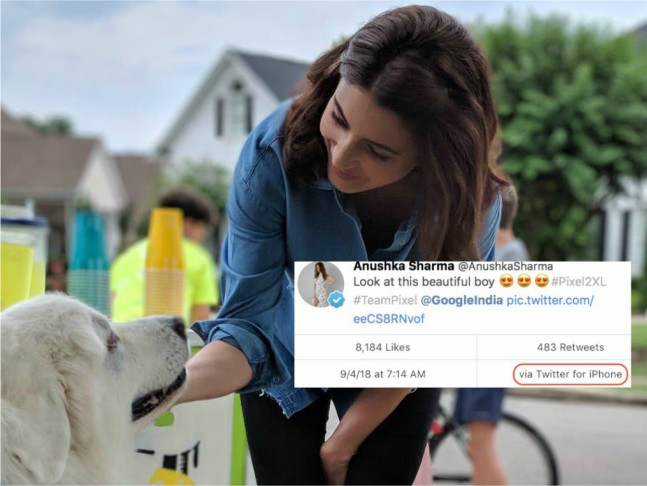 Once on the internet, always on the internet! There is truly no hiding when you are on the World Wide Web. Even the slightest of a goof-up is captured or screenshot and stored. Today is the same! Bollywood diva Anushka Sharma has been making headlines for a few days now with her upcoming film Sui Dhaaga: Made in India. But there’s more to the film. Netizens found a still of Anushka from the film’s trailer and unleashed their humour with never-ending memes. While that trend hasn’t died yet, it looks like a second round is about to begin.

Today, Anushka shared a couple of pictures of her with a dog on her Twitter and captioned it as “Look at this beautiful boy! #PIXEL2XL #TEAMPIXEL @GoogleIndia”

The pictures, as seen, have clearly been clicked on a portrait mode and probably from a Google Pixel phone. However, what caught the attention of a popular Twitter celeb and YouTube tech-creator Marques Brownlee is, Anushka tweeted the pictures using her iPhone device.

Recommended Read: Anushka in ‘Sui Dhaaga’ is a brilliant actor; but who knew she makes for a brilliant meme too!

Making sure that Anushka’s little goof-up serves a laugh to Netizens, Marques took a screenshot and shared it on his Twitter page. He wrote, “Ok I don’t even want to know how this keeps happening but it’s hilarious”

The actress quickly made fixed the situation by tweeted it again. Marques confirmed this when a fellow follower asked him how he could check it. The YouTube creator responded with “Yeah deleted and retweeted but just scroll down a bit for more Pixel ads from an iPhone lol”

Well, there could be a whole new set of memes on this little goof-up. But for all we know is if Anushka chooses to respond to the situation, it will be a crisp and sassy comeback!