Sidharth Shukla's family members request people to respect actor's consent and take their permission before releasing his projects; here's why

On Tuesday evening, Sidharth Shukla's family members issued a statement on social media requesting people to take their consent before releasing any project featuring him. Shehnaaz Gill, who shared a special bond with the late actor since Bigg Boss 13, also posted the statement on her Instagram stories.

The statement read, "We, as a family, come with a request, which we hope everyone will respect. Sidharth has moved on and no longer can he make decisions for himself, but he’s still an integral part of our lives and our memories and we are there to protect his wishes. We request everyone who wants to use Sidharth’s name and/ or face in any project, please reach out to us. Please take a moment to ask us."

Sidharth's family members wrote, "We knew Sidharth’s choices, we knew what he would have wanted and our decisions for him would be keeping all this in mind. And if there were projects that he wasn’t happy with, we are sure he wouldn’t want them released. Anything that did not release when he was with us, did not have his consent or intent for release. So please let’s keep his wishes in mind and let’s remember him with love, with respect, with fond memories, the ones he left us with…" 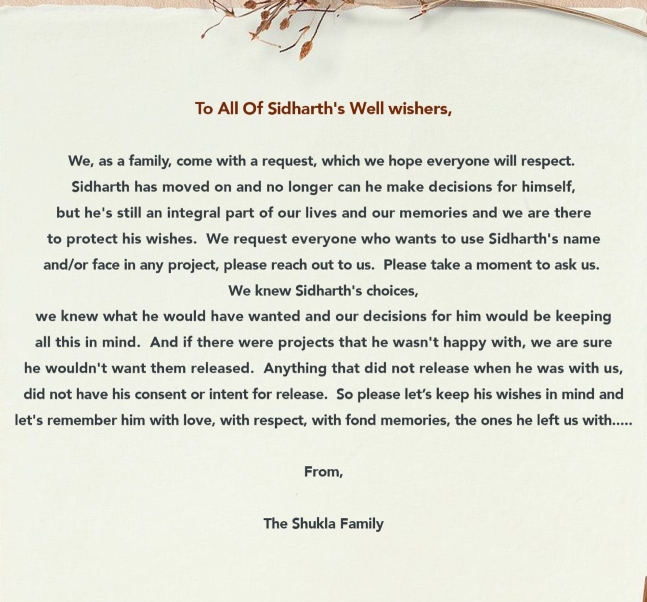 The statement left people puzzled. The reason behind the statement is apparently a song that featured Sidharth with Bigg Boss 15 fame Vishal Kotian which was shot years ago. It is believed that the Bigg Boss 13 winner wasn't happy with the end result of the song.

After his eviction from Bigg Boss 15, Vishal hinted during a media interaction that the song would release soon.

Please have the reference video regarding the below tweet as many were asking about it. It had been shooted earlier in 2k19 but as we haven't seen so it would definitely gonna be his last appearance for us #SidharthShukla https://t.co/1SZCRwUGHl pic.twitter.com/5FxA0IOCmH

It is not clear whether Vishal will go ahead with the song after the statement or withhold it.