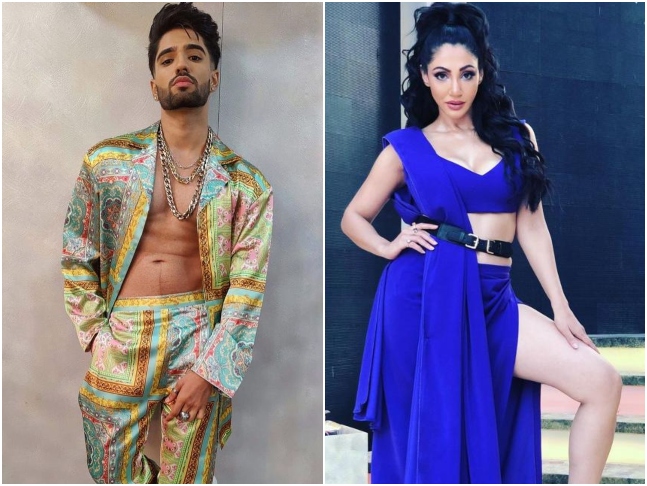 From ditching his original 'connection' Urfi Javed for Divya Agarwal to becoming the Boss Man, Zeeshan Khan is making the right amount of noise for his performance in Bigg Boss OTT. Known as TV's 'bathrobe boy', Zeeshan is one of the strongest contestants in the house. As he continues to impress all in Bigg Boss OTT, rumours are rife that he is dating Reyhna Pandit.

According to an entertainment portal's report, Zeeshan and Reyhna are dating each other for quite some time but, they are yet to make their relationship official. A source told the portal that only close friends of the rumoured couple are aware of their relationship. Since Zeeshan is locked inside the Bigg Boss OTT house, the portal got in touch with Reyhna. She dismissed the rumour and said, "No, we are not dating." Zeeshan played the role of Aryan Khanna and Reyhna was his on-screen mother Alia in Kumkum Bhagya. Before making headlines for entering Bigg Boss OTT, Zeeshan was the talk of the town for his bathrobe stint at the airport. While returning to Mumbai from Goa, the actor decided to travel in a bathrobe. The video went viral and Zeeshan found himself on the trending list.

Talking to PeepingMoon.com in an exclusive interview, Zeeshan opened up about the bathrobe incident and clarified that it was not a publicity stunt for Bigg Boss OTT. He said, "Definitely not yaar! People often say, “Isne yeh kiya toh isko yeh kaam mila,” when something good is happening to someone. When we were in Goa (for Kumkum Bhagya), we had outdoor shoots. Weather-wise what is pleasant for you is hot for me. We used to wear thick clothes so every time we were done with our shoot, I would get into a bathrobe and roam around in it. I am half-Persian (my dad is Persian). Whenever I wore a bathrobe, my co-stars said I carry the look well and exude royalty. I really enjoyed that phase. However, I got disheartened when we were returning to Mumbai thinking I wouldn't get a chance to wear a bathrobe. That's when I decided to fly in a bathrobe. I never thought the video will go viral. It reached every corner of the world. After this whole thing happened, I got offered Bigg Boss OTT. I didn’t do the bathrobe thing for the show but I did it for myself. As I said, I don’t follow the norms, I question them. I wasn’t doing anything wrong. This wasn’t a publicity stunt for Bigg Boss OTT. What you need to understand is that I did something different, you are a part of the cattle, I am a wolf."