The hype around Bigg Boss 15 is real. In just a few days, Bigg Boss OTT will premiere on Voot Select and 6 weeks later, the show will move seamlessly into the Colors channel with the launch of Bigg Boss 15. Popular celebrities from Bollywood, television and other walks of life will participate in the reality show. While the list of contestants is yet to be released, rumours are rife that Arjun Bijlani is the first confirmed participant of Bigg Boss 15. Arjun is yet to confirm the same.

A source close to the development told a leading daily that Arjun, who participated in Khatron Ke Khiladi 11, has decided to go ahead with Bigg Boss 15 too. "He is satisfied with his remuneration, plus he has made up his mind that yes he would be staying away from his family for a few more months. It wasn't easy for him to do the same in 'Khatron Ke Khiladi 11' but then as both the shows in question are big tickets to visibility and popularity, he decided to go ahead with 'Bigg Boss 15' too," the source shared.

Recommended Read: Over The Top Meets Over The Top: Karan Johar to host 'Bigg Boss OTT' on Voot, to premiere on August 8

On the other hand, Disha Parmar dismissed rumours of participating in the reality show this season. The actress tied the knot with Bigg Boss 14's first runner-up Rahul Vaidya on July 16. Disha told an entertainment portal, "This time, no. Not yet. But even if they do offer me, I don’t think I’ll be comfortable. It's a show which I don’t resonate with, I mean I don’t feel comfortable. I have been offered the show so many times, it's just that I never did it because I never felt I was right for it, and I still feel that. So I think I am going to avoid this time too." Reports surfaced that Aditya Narayan will be getting locked in the Bigg Boss 15 house. However, the actor-singer-host issued a statement on his Instagram stories and said, "Contrary to speculation, I am not going to be a contestant on the upcoming season of #BigBoss or any season for that matter. Always happy to guest feature. Would even love to host it someday. But I have neither the time nor the inclination to participate. Best wishes to @colorstv @endemolshineind & the entire team for putting up a great show every year & I am sure this year will also be just as great." 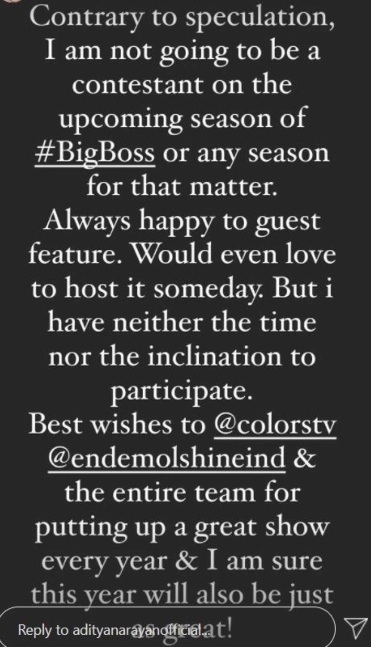 Bigg Boss OTT will not be hosted by Salman Khan. Karan Johar has stepped in as the host. The audience will get to see Salman grilling contestants in Bigg Boss 15.

Pavitra Punia and Eijaz Khan cast romantically together for the first

Shaheer Sheikh's father on ventilator due to COVID-19 infection, actor asks fans to pray for his speedy recovery

Neha Bhasin all set to judge a singing reality show on a leading TV channel? Deets inside