TV actress Preksha Mehta passed away at her residence in Indore, Madhya Pradesh. She was only 25-years-old. Preksha committed suicide and killed herself by hanging herself from the ceiling fan in her bedroom. She had worked in episodic shows like Crime Patrol, Meri Durga, and Laal Ishq. She also starred in Akshay Kumar and Sonam Kapoor starrer PadMan.

Preksha ended her life on Monday night at her residence Bajrang Nagar which comes under Hira Nagar police station by hanging herself from a ceiling fan. She was found hanging by her father today morning when he went to wake her up in the morning. Her father found her at around 6:30 am and rushed her to the hospital but she was declared brought dead. The actress had moved to her hometown from Mumbai before lockdown and was under stress due to work. She had also mentioned work-related issues due to lockdown on her Facebook page and Instagram stories a few days back. 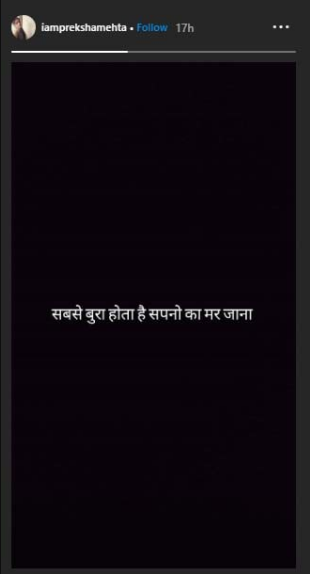 An online portal reported that the Hira Nagar police station in-charge, Rajeev Bhadoriya has said that she left no suicide note behind her. The portal quoted him, “Preksha was a TV actor and was in the city since the lockdown. We are investigating the case further to know the reason of her suicide.”

Preksha had moved to Mumbai two years back and was allegedly under depression after the lockdown and worried about not getting work.