Rithvik Dhanjabi and Asha Negi have been dating each other for almost six years now, however, the two have been in the news off lately for their alleged breakup. They have been sharing cryptic posts onsocial media raising speculations that all is not well between the two. However, amidst all this negativity, Rithvik has taken to social media to wish Asha for the season 2 of her upcoming web series Baarish season 2 that also stars Sharman Joshi. A poster of the series was unveiled today along with the teaser announcement that will release tomorrow.

Rithvik wished Asha for her upcoming web series and wrote, “Get ready to be drenched in love!!”Now Rithvik’s post has left us wondering whether the two have actually broken up and gone separate ways and this is just a gesture on Rithvik’s part or whether the rumours are just baseless. Nevertheless, things are definitely murky. 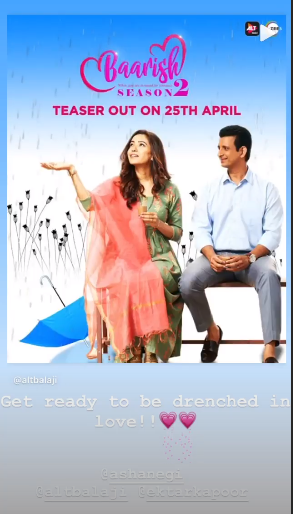 RECOMMENDED READ: Did Rithvik Dhanjani confirm his breakup with Asha Negi in his recent cryptic post?

Check out the poster of Asha’s and Sharman’s upcoming show Baarish season 2 that will stream on Ekta Kapoor’s digital platform ALTBalaji. The poster looks really nice with Sharman and Asha enjoying the Mumbai monsoons under the umbrella. It gives a sneak-peak into the lives of Anuj (Sharman Joshi) and Gauravi (Asha Negi) as they give a second chance to their relationship. The rain playing a pivotal role in this romance-drama, the second installment of the series will showcase the hardships of maintaining relationships. Will Gauravi and Anuj come together? If yes, will their relationship be the same as before? We may get a few more answers as the teaser is all set to drop tomorrow! Watch this space for more updates.